The probable next prime minister attracts mixed reactions abroad, from dislike in Moscow to irritation in France to positivity in Australia and Japan

She has caused uproar by questioning whether the French president, Emmanuel Macron, is a trusted ally and pursued a policy in Northern Ireland that has upset the White House.

Should Liz Truss become prime minister on 5 September, she will come with some unhelpful baggage to the top table on the international stage at a fraught time.

The challenges will come thick and fast. From the war in Ukraine, the global energy crisis and the urgent calls for more and deeper action on the climate crisis, the world is looking for leadership from the major economies, of which Britain remains one.

Within weeks of arriving in Downing Street, Truss will address the UN general assembly in New York, and then she will travel to Bali in November for a meeting of the leading 20 world economies, the G20.

From Brussels and Beijing to Canberra and Kyiv, Washington and Tokyo to Paris and Moscow, here is how the world’s major capitals view the frontrunner to succeed Boris Johnson.

The Biden administration is well aware that Liz Truss is no ideological bedfellow and that she has carefully cultivated connections with the Republicans, but on US foreign policy priorities, confronting and containing China and Russia, there is confidence in Washington that she will be a reliable ally. 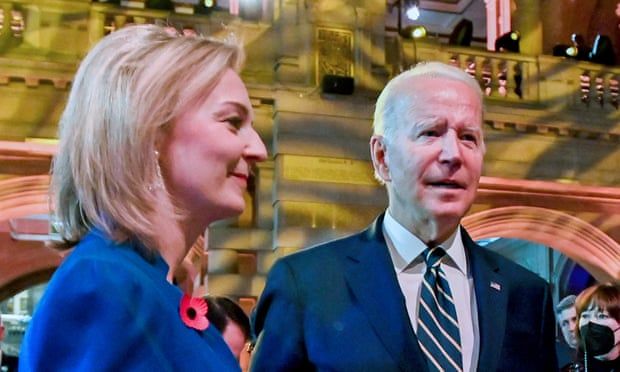 The multinational effort to arm Ukraine and Aukus, the trilateral security pact in the Pacific that also includes Australia, have become the key arenas where the transatlantic alliance is being put to the test. The UK is second only to the US as an arms supplier to Ukraine, and the administration is hopeful that support will be maintained and even stepped up under Truss.

There was also appreciation of her firm line on Taiwan and her vocal support for this month’s visit there by the House Speaker, Nancy Pelosi.

The friction in the supposed special relationship will remain Brexit and its impact on the Good Friday agreement in Ireland, and on this issue there are fears in Washington that things will get worse under Truss, who particularly irritated the White House with her 17 May announcement that the government would be proceeding with legislation on the Northern Ireland protocol, which would rewrite parts of the Brexit divorce deal in a way considered to be breaching international law. The administration had been told no decision had been taken on legislation and felt blindsided. There will be strong US pressure on a Truss government to compromise with the EU. 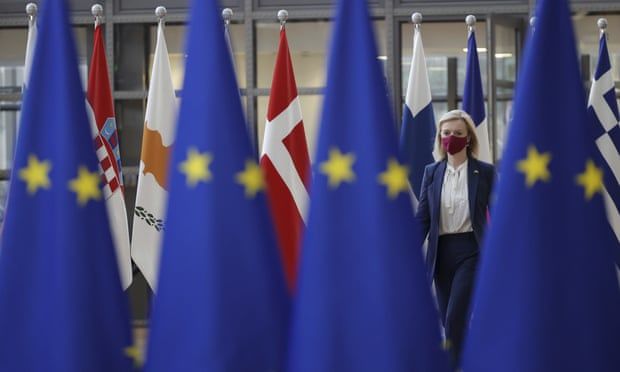 Liz Truss arriving for an extraordinary EU meeting of foreign ministers at the European Council building in Brussels in March.

There is no shortage of cynicism in Brussels. The need for political posturing before a leadership campaign is well understood. The confrontational stance taken by Liz Truss over the future of the Northern Ireland protocol came as Boris Johnson’s position in No 10 had started to look vulnerable. The belligerence of her position plays well with those in the party who believe shouting loudly is the best way to communicate with inflexible Europeans who appear not to understand.

If it is a short-term tactic, the logic goes, then perhaps Truss may soften up once in Downing Street. Truss did, after all, seem to take a more pragmatic approach than David Frost when she first inherited responsibility for the post-Brexit problems. The Northern Ireland bill tearing up the current agreements will be debated for months in the Lords, offering time for compromise.

That, however, is the optimistic analysis. Those who fear only further discord point to the suggestion that Frost, who has not always been keen on compromise, is set to take a prominent role in Truss’s government. As an omen, it is not regarded as a good one. A crunch point is coming on 15 September when the government will need to respond to EU legal action over the alleged failure to implement the protocol.

Until last week, Liz Truss was best known in Paris as the principal champion of the Northern Ireland protocol bill. Her remarks on Thursday that “the jury is still out” on whether the French president, Emmanuel Macron, is “friend or foe” has focused minds rather more sharply.

Cross-Channel relations have been at rock bottom since Brexit, and further strained by bilateral rows over migrant and refugee crossings, fishing licences and the Aukus security pact. Paris no longer trusts London to keep its word, while London believes Paris is interested only in punishing it for leaving the EU.

Hopes for a thaw after the departure of Boris Johnson now look forlorn. Macron rebuked Truss without naming her, saying the UK was a friendly nation for France “regardless, and sometimes in spite of, its leaders and their little mistakes”.

Nathalie Loiseau, a former Europe minister, said Truss’s comments showed neither the leadership nor the statesmanship expected of a British prime minister, while Sylvie Bermann, a former French ambassador to London, said Truss should be judged by her actions, but her “positions make it probable” that relations will get worse.

Liz Truss would tick pretty much all the boxes for Volodymyr Zelenskiy’s government when it comes to an ideal successor to Boris Johnson. Billing herself as a “freedom fighter”, she has vowed that Ukraine’s president will be the first foreign leader she calls from Downing Street. 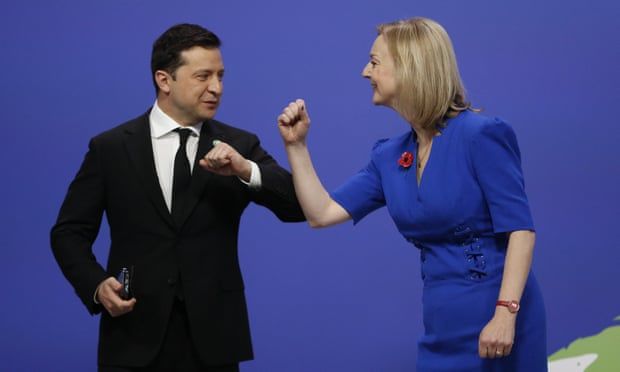 The foreign secretary has arguably, however, fallen into the trap that even Johnson had suggested was unwise, that of being “more Ukrainian than the Ukrainians”. The public position of Ukrainian officials taking part in the earlier failed peace negotiations with Moscow was that Russian troops should withdraw to their positions of 23 February. But Truss has also gone somewhat further in insisting that Russia should be ousted from Crimea, which it illegally annexed in 2014. This would clearly be the dream scenario for Kyiv, but few in the Ukrainian government believe it is realistic. Setting it as a red line risks throwing the baby out with the bathwater.

If Kyiv was pushed to list any further concerns, it would be that Truss’s shaky relations with European governments due to her insistence on ripping up a treaty-level agreement with the EU on the border arrangements for Northern Ireland. She may not therefore be as effective an ally in the event that she needs to persuade EU leaders to be tougher on the Kremlin.

The Kremlin has carefully avoided any public statements about its preference in the Conservative leadership race, although its dislike of Truss is barely disguised.

“Bearing in mind all earlier statements, we of course hope that the future prime minister of the UK will be inclined to a more balanced rhetoric on our country after taking this seat,” said Dmitry Peskov, the spokesperson for Vladimir Putin. 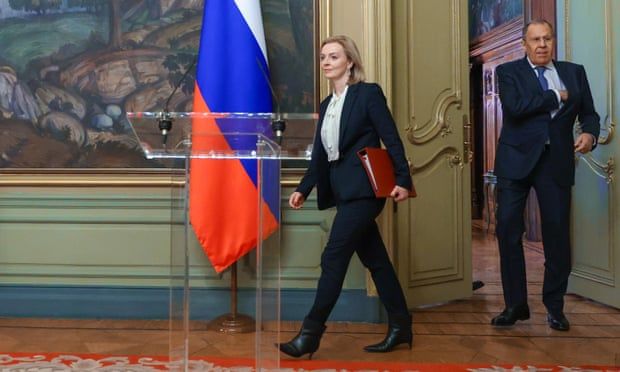 Liz Truss in Moscow arriving at a joint press conference with the Russian foreign minister, Sergei Lavrov, in February.

But Russian propaganda has made clear its disdain for Truss, portraying her as dyed-in-the-wool Russophobe whom one anchor called a “poor imitation of Margaret Thatcher”.

Nearly one month after Kate McCann fainted during a televised debate, state television hosts continued to mock Truss’s shocked reaction, saying you could “call it losing face … This is what subjects of the crown will have to live with.”

Both Truss and Rishi Sunak have made clear that the elections will have little effect on UK policy toward Russia or its invasion of Ukraine. Yet Truss has history with Russia, especially during a frosty meeting with the Russian foreign minister, Sergei Lavrov, just weeks before the beginning of the war in Ukraine.

Lavrov described the conversation as one between “the dumb and the deaf”. It is unlikely she’ll get a warmer reception from Putin as PM.

It is no secret that Beijing is no fan of Truss. Since she became foreign secretary, state-owned Chinese press have called her “a radical populist” and described her China-related speeches as “crazy”.

Beijing would certainly prefer a prime minister who is practical in dealing with China – even if it knows there’s no prospect of a return to a “golden age” of bilateral relations.

In the Chinese press, descriptions of Truss being hawkish and irrational have been commonplace. In the past week, much attention was paid to Truss’s remark in a hustings event in Birmingham that she would be ready to use the UK’s nuclear arsenal if she were to become prime minister, even if it meant “global annihilation”.

Chinese officials have been careful in making direct remarks, however. Early this month, Zheng Zeguang, China’s ambassador to the UK, said his government would work with “whoever becomes the new PM for the development of the China-UK relationship”.

The former Coalition government of Scott Morrison had a reasonable relationship with Truss, with one former MP describing her as a strong supporter of the bilateral relationship. However, as trade secretary she managed to blindside the former trade minister Dan Tehan when her allies launched an unprovoked attack on him before a key meeting in London, suggesting he would be forced to sit in an “uncomfortable chair” for nine hours during their negotiations.

The former prime minister Tony Abbott of the conservative Coalition was appointed by Truss as a trade adviser in 2020, forcing her to fend off questions about his history of controversial comments about abortion, marriage equality and gender equality.

The new government of Anthony Albanese has only had limited dealings with Truss since it was elected in May. The foreign minister, Penny Wong, met Truss briefly at the G20 meeting in Bali last month before the foreign secretary cut short her visit to return home and drum up support for her prime ministerial bid. 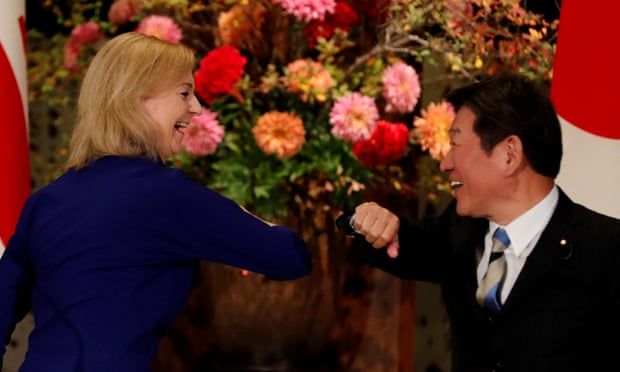 Japan will represent low-hanging fruit – diplomatically, economically and on the security front – for Truss as prime minister. In 2020, as international trade secretary, she signed a major post-Brexit trade agreement with the world’s third biggest economy – although critics have pointed out that it was a near copy of the deal the EU and Japan had concluded the previous year when Britain was still a member.

UK-Japan negotiations were not all straightforward, however. At one point, reports suggested the agreement hinged on Truss securing special access for stilton, even though UK exports of blue cheese to Japan were worth a measly £102,000.

On the foreign policy front, she will encounter few obstacles to building closer security ties as they share concerns about Chinese military activity in the Taiwan strait and North Korea’s nuclear weapons programme. While many Japanese officials were privately baffled by the UK’s exit from the EU, Truss will find Britain-Japan ties in relatively good shape – helped, perhaps, by her predecessor’s appetite for produce from Fukushima.