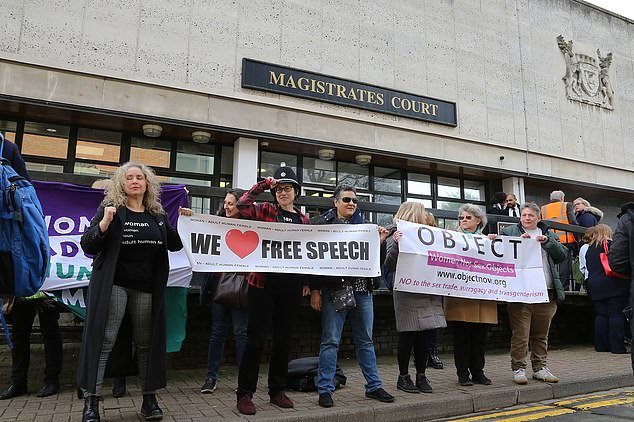 Victory in the war on woke: Judges' landmark ruling in case of mother who called trans woman 'he' on Twitter means freedom of speech DOES includes the 'right to offend'

Judges have insisted that freedom of speech includes the 'right to offend' in a landmark ruling which could help to turn the tide on 'woke' intolerance after a feminist who called a transgender woman a 'pig in a wig' and a 'man' was cleared.

Presiding over a case in the Court of Appeal, Lord Justice Bean and Mr Justice Warby said: 'Freedom only to speak inoffensively is not worth having.'

They added that 'free speech encompasses the right to offend, and indeed to abuse another'. The judgment from two senior members of the judiciary will set a precedent for future cases involving freedom of speech.

The ruling has emerged only now, but came in the successful appeal decided last week in favour of mother-of-two Kate Scottow, from Hitchin in Hertfordshire, after she had been found guilty under the 2003 Communications Act earlier in the year.

Miss Scottow told The Daily Telegraph: 'It was necessary to enshrine one of the most fundamental rights of every living being in a democratic society – the right to freedom of speech that is now routinely attacked...' But Miss Hayden said: 'This is... a kick in the teeth to the entire LGBT community.'

Miss Scottow was arrested in 2018 and taken from her children and into custody after referring to trans woman Stefanie Hayden as a man, a 'racist' and a 'pig in the wig'. Miss Hayden, 47, reported the online remarks to police.

She had been arrested by three police officers in 2019 at her home in Pirton near Hitchin, Hertfordshire, in front of her daughter, 10, and son, 20 months. Boris Johnson later called it an abuse of power.

In February this year radical feminist Miss Scottow, 40, was handed a two-year conditional discharge, and ordered to pay £1,000 compensation, with district judge Margaret Dodds telling her: 'Your comments contributed nothing to a debate. We teach children to be kind to each other and not to call each other names in the playground.'

But, overturning the decision, Mr Justice Warby explained that the relevant parts of the Communications Act 'were not intended by Parliament to criminalise forms of expression, the content of which is no worse than annoying or inconvenient in nature'.

Mr Justice Warby also suggested that the prosecution had been an 'unjustified state interference with free speech'.

Lord Justice Bean said the appeal illustrated the need for decision-makers in the criminal justice system to have regard to issues of freedom of speech.

The two appeal judges, who outlined their reasoning in a written ruling published on Wednesday, said prosecutors had not obtained 'all the contextual material for the offending messages', and had presented the case in a 'somewhat disorderly way' at the trial.

Activist Miss Hayden, who began medically transitioning in 2007 and was given a gender recognition certificate in 2018, won a landmark case at the High Court in April last year when website Mumsnet was forced to reveal the identity of an anonymous user who had been accused of bullying her online.

In February Ms Scottow, 39, was found guilty of persistently making use of a public communications network to cause annoyance, inconvenience, and anxiety to Stephanie Hayden, 48, between September 2018 and last May.

The 'radical feminist' was accused of deliberately 'misgendering' Ms Hayden by referring to her as 'he' or 'him' during a period of 'significant online abuse'.

Throughout the trial her supporters gathered outside St Albans Magistrates' Court to protest the verdict, chanting 'pig in a wig' and 'he's a man - go on prosecute me'.

Holding banners which read 'we love free speech', the mob tied scarves in the Suffragettes' purple, green, and white to lampposts outside the courthouse.

But Ms Hayden argued the defendant was guilty of 'harassment' and had 'misgendered' her 'to annoy people like me', adding: 'It's calculated to violate my dignity as a woman.'

Trumpeting her Gender Recognition Certificate, the complainant told the court how Ms Scottow was bound by law to refer to her as a woman. Ms Scottow was handed a two-year conditional discharge, and was ordered by the court to pay £1,000 compensation within six months.

But now after a successful appeal the prosecution has been quashed.

In a separate incident Father Ted creator Graham Linehan was given a verbal harassment warning by West Yorkshire Police after Miss Hayden reported him for referring to her by previous names and pronouns on Twitter in 2018.

Police faced a backlash for phoning a 74-year-old woman to warn her that her online posts about gender identity had offended transgender people.

Former local journalist Margaret Nelson wrote in her blog that if a transgender person's body was dissected post-mortem, 'his or her sex would be obvious to a student or pathologist'.

But she was later contacted by Suffolk Police, who woke her with a morning phone call, telling her the comments had provoked complaints from members of the trans community.
Add Comment