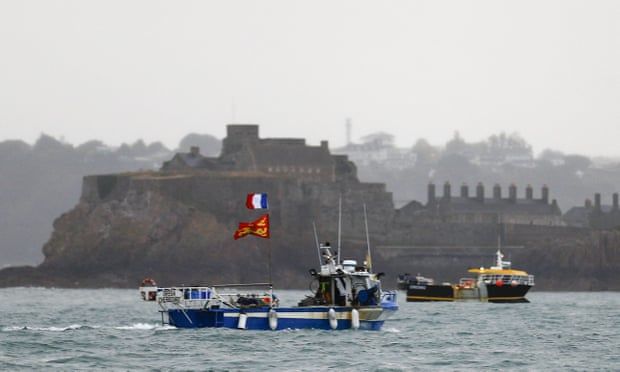 Jersey’s government is bracing itself for a blockade of its main port by angry fishers and France said it would look at “retaliation measures” after a third of French boats applying to fish in the Channel island’s waters were turned down.

The French maritime minister, Annick Girardin, said France and the EU would work on potential responses over the next two weeks unless the UK was able to resolve the dispute quickly.

Paris is considering measures that would involve energy and trade, as well as train connections and British students living in France, she said after a meeting with fishing representatives. She called on other European countries to show solidarity “because what France is going through today, some others will also go through it”.

The French government spokesman, Gabriel Attal, said the decisions by the UK and Jersey authorities were “totally unacceptable and inadmissible” and “contravene the agreement that was signed in the framework of Brexit”.

“We are going to continue and step up our work with the [European] Commission to move forward on this issue, and also to study possible retaliation measures that could be taken if the agreement is not respected,” he said.

Jersey’s minister for external affairs, Ian Gorst, insisted that its government had taken a “pragmatic” approach in issuing 64 full licences and 31 temporary licences to French boats, on top of the 47 vessels already licensed earlier this year.

But a further 75 French boats for whom applications had been received were rejected as “they do not meet the criteria and have either not fished in Jersey waters during the relevant period or have not been able to evidence their activity”, the government said. “These 75 vessels are being given 30 days’ notice of the end of the transitional arrangements, after which they will no longer be able to access Jersey waters.”

Gorst said he was open to any of those boats providing fresh evidence in support of a permit, but he conceded there was a danger of reprisals from fishing communities affected, particularly in Brittany.

He said: “I think we acknowledge that feelings are running high in the fish community in the north of France and I hope that there aren’t any blockades, but we are not naive enough to not recognise that we really do need to work together to alleviate concerns and make progress because that does remain a possibility.”

Gorst said that while some of the applicants may have previously had permits to fish in Jersey’s waters, the EU-UK trade agreement provided rights only to those who could prove that they had actually operated in those waters for at least 11 days over the previous three years.

Girardin accused the British government of taking her country’s fishers as a political hostage in relation to the decision by Jersey and a separate announcement on Tuesday by the UK government refusing to grant most of their vessels access to its coastal waters.

The UK announced it had approved only 12 out of 47 applications for new licences for small boats to fish in the six- to 12-mile coastal zone.

“I want the licences back,” Girardin said. “The British wanted to divide us with this decision which comes after many months of discussions. We have provided all the necessary information, we have transmitted all the requested data. This new kick from the British is the demonstration of their unwillingness to respect their commitments. I now appeal for European solidarity to move towards a balance in our relations with our British neighbours.”

Dimitri Rogoff, the president of the regional fisheries committee in Normandy, suggested fishers were now preparing to blockade Jersey’s main port. “They are ready to attack [Jersey’s capital] St Helier. It is tense, very very tense,” he said.

Loïg Chesnais-Girard, the president of the regional council of Brittany, tweeted: “I ask the European Union to take all possible retaliatory measures to allow such a decision to be reviewed. Together, fishermen, authorities and the European Union, we must unite to bring the United Kingdom back to reason.”

The French government said 87 smaller fishing vessels had applied for permits, not 47 as London had said. Paris has privately called on the European Commission to use the tools within the trade and cooperation agreement agreed with the UK last Christmas Eve to force the UK to be more cooperative.

A spokesperson for the European Commission said it would seek full transparency from the UK authorities over their decision. “We will continue to further engage in the interest of our fishermen and women so that further licences will be provided,” he said.

EU sources offered a sceptical analysis of the developments. One suggested the decisions had been timed with the upcoming Conservative party conference in mind. “This is a game to them,” suggested a source in Brussels.

Gorst said Jersey had sought to coordinate with the UK decision but he denied that the timing had been related to the Tory conference.
Add Comment