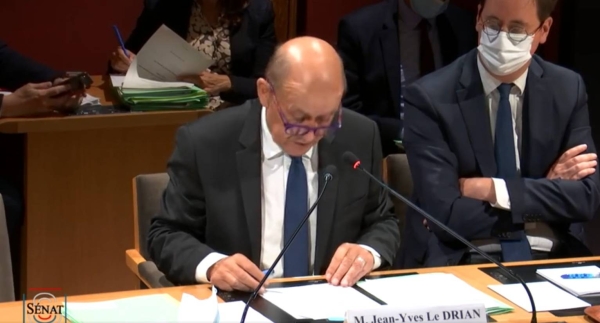 France: Serious actions needed to get out of submarine crisis

Serious actions were needed for Paris and Washington to get out of the crisis in relations following the submarine row, French Foreign Minister Jean-Yves Le Drian has said.

The crisis "has not ended only because the dialogue has resumed," Le Drian told a hearing at the French Senate Commission on International Affairs on Wednesday.

"It will continue. And in order to get out of it, serious actions will be needed, not words," he said.

France's ambassador returned to the United States on Wednesday, nearly two weeks after he was recalled for consultations over the scrapping of a 2016 purchase contract of French-made diesel-electric submarines by Australia.

Australia, Britain and the United States recently announced a new security partnership known as AUKUS, under which the first initiative is the delivery of a nuclear-powered submarine fleet to Australia by the other two.

The French foreign minister, who had condemned the trilateral move with harsh words such as "lying" "betrayal" and "backstabbing," told the Senate that "at no time" had the Australians "openly expressed their wish" to break the contract with France or "mentioned discussions with other partners."

For the Foreign Affairs and Defense Committee in the Senate, this situation raised the question over the action of French diplomatic and intelligence services relating to the knowledge and anticipation of this event.

"Have we really been the dupes of a pact under construction for 18 months, as it is revealed by the news now? Should we add this humiliation to the camouflet?" asked Christian Cambon, president of the committee.

"Neither the Americans nor the British took the initiative of informing the French authorities," answered Le Drian, once again denouncing the "betrayal.""It happened in a very small circle," he added when explaining why the intelligence services had seen nothing.

On upcoming actions, the minister said France also needs to reconsider its relations with Britain. "London should know that it has violated its obligations, including under the agreement on trade and cooperation," he said.

Noting that France will not question the main mission of the North Atlantic Treaty Organization (NATO), which "is our collective defense," Le Drian reiterated that the consequences of this crisis could impact strategic relations within NATO.

France has initiated a revision of NATO's strategic concept and will continue with this work at the summit of the trans-atlantic alliance in Madrid next year, he said.

France has repeatedly pledged that it would make "developing a European Union security strategy" a priority when it takes on the bloc's presidency at the start of 2022.
Add Comment