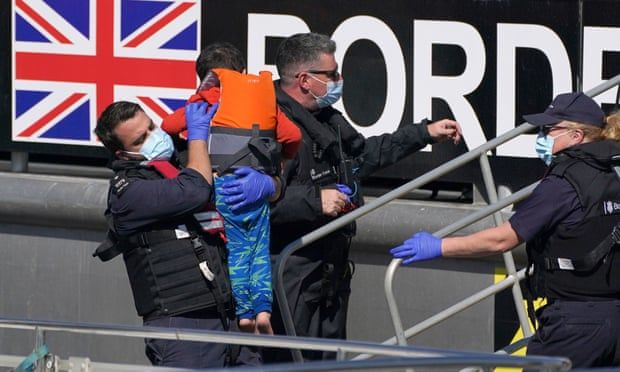 France accuses Patel of blackmail in row over Channel migrants

Priti Patel has been accused by France’s interior minister of plotting “financial blackmail” and a violation of international maritime law in a deepening diplomatic row over efforts to prevent migrants from crossing the Channel by boat.

Gérald Darmanin said that UK plans, released on Wednesday night, to send back boats of vulnerable people into French waters would not be accepted by his government.

“France will not accept any practice that breaks maritime law, nor any financial blackmail,” Darmanin wrote on Twitter. “Britain’s commitments must be respected. I said this clearly to my counterpart” during a meeting on Wednesday, he added.

The statement from Darmanin, the British home secretary’s counterpart, reflects anger in Paris about reported plans by the British government to begin turning back boats carrying migrants once they enter UK waters in the Channel.

French officials and unions are also concerned that the “turnaround” tactics could result in greater numbers of migrants jumping into the sea as Border Force vessels approach.

Patel, who is under pressure from Boris Johnson and Tory MPs to halt the Channel crossings, has approved the new hardline strategy. She claimed to have secured legal advice for Border Force vessels to start redirecting migrant boats away from UK waters and back towards France, where the French authorities would have to return them to shore.

French officials have also been angered by suggestions that Britain could withhold some of the €62.7m (£55m) it promised earlier this year to fund policing and patrols in northern France unless more is done to prevent crossings.

A French interior ministry source said there had “never been any question of making payment conditional on numerical targets”. “Such an approach would reflect a serious loss of confidence in our cooperation,” the source said.

The source said that any form of intercepting boats at sea, when those boats did not want to be escorted, was very dangerous and could lead to more people jumping or threatening to jump into the sea.

Lucy Moreton, a professional officer at the Immigration Services Union that represents Border Force guards, said she was also concerned that Patel’s announcement could lead to more migrant passengers leaping into the water. “This announcement makes it more likely that some could jump into the sea when they are approached to ensure their boat is not turned back,” she said.

In the morning, Moreton had told BBC Radio 4’s Today programme that the plan was “dead in the water” as France would “simply not engage in this”.

Union representatives who have examined the protocol for using the “turnaround” tactic suspect it will never be used. Kevin Mills, the Border Force rep for PCS union, said he suspected that the tactic was part of a “headline-grabbing exercise” because the UK authorities must fulfil exacting criteria before implementation.

“To use this tactic, you need perfect weather, you need to know there is adequate fuel on the suspected vessel so it can return to France, the vessel would have to be seaworthy, there can’t be any babies or minors on board, every passenger has to be healthy, and there can be no chance of loss of life. Highly unlikely,” he said.

Tim Loughton, a Conservative member of the home affairs select committee, also poured cold water on the prospects of the tactic being used in practice. “It sounds good. But I’m afraid in practice it’s just not going to happen. These are flimsy boats coming over. Even those that are tougher are completely weighed down.

“Any boat coming up alongside at speed would capsize most of these boats anyway and then we’re looking at people getting into trouble in the water and drowning … and then we’ll get blamed for that.”

Aid organisations and refugee representatives condemned the announcement. The British Red Cross said the policy would detract from finding solutions that would give people alternatives to making the dangerous crossing through busy shipping lanes.

“Intercepting vessels in the Channel is incredibly high risk and to push people back will endanger their lives, which is totally at odds with the legal duty of rescue at sea.”

Johnson’s official spokesman rejected the claims of financial blackmail and said the government had “provided our French counterparts with significant sums of money previously, and we’ve agreed another bilateral agreement backed by millions of pounds”.

He said: “I don’t think any single approach is going to solve this challenge, which sees criminal gangs target some of the most vulnerable people, and we want to work with our French counterparts, and indeed the wider EU, on a range of options to address this longstanding problem.

A Home Office source said the plans had been fully examined by the government. “We are looking at this as one part of reform of the entire system. We believe there would be a deterrent effect from making the journey in the first place,” the source said.
#priti patel  #boris johnson  #johnson
Add Comment