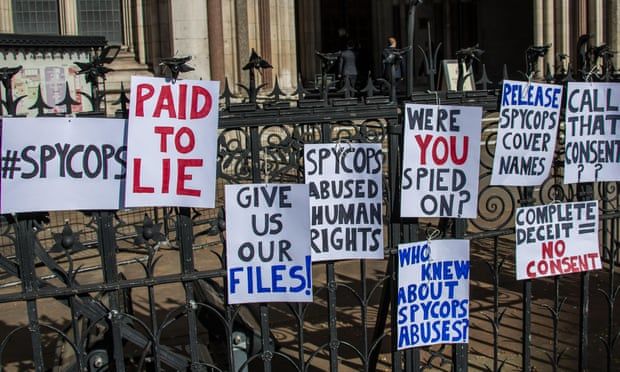 A fourth undercover officer who spied on political campaigners is alleged to have fathered a child with a woman he met while using a fake identity, a public inquiry has heard.

The officer used the alias Alan Bond while infiltrating the Socialist Workers party between 1981 and 1986.

The allegation is being examined by a judge-led public inquiry that is scrutinising the activities of undercover officers who have spied on more than 1,000 political groups since 1968.

Previously it has been revealed that three undercover officers who spied on leftwing activists between the 1970s and 1990s have had children with campaigners they met during their deployments.

Separately, the inquiry heard on Wednesday that Jim Pickford, who infiltrated anarchist groups in the 1970s, met a woman during his deployment and had a child with her.

On Thursday, Phillippa Kaufmann, a QC representing women who have been deceived into sexual relationships, said Bond admitted to having had “a fleeting sexual encounter in his cover name with a woman who was not a member of his target group”.

She said that, from questions circulated by the inquiry, “it appears that [Bond] may have fathered a child with someone he met during his deployment”. No further details were given.

She said: “We have belatedly learned from the inquiry that Bond will not now be giving evidence due to a deterioration in his health.”

She said that for three years in the 1990s Bond was promoted to a senior position in the Special Demonstration Squad (SDS), a covert unit that monitored political groups for four decades. He was in charge of several undercover officers who had sexual relationships with women without revealing their true identity to them.

Kaufmann said it was clear that the practice of undercover officers deceiving women into relationships was “endemic”. It demonstrated “the systemic and long-running sexism through the [SDS] which allowed officers and their superiors to think it was acceptable to engage in such abusive practices.”

A key issue in front of the inquiry, which is headed by Sir John Mitting, is how at least 20 undercover officers had sexual relationships with women between the mid-1970s and 2010.

On Wednesday the inquiry heard evidence for the first time from one of the deceived women. The woman, known only as Madeleine, said the officer, Vince Miller, probably saw her as “easy pickings” at the time of their relationship as she was “very vulnerable having recently separated from my first husband who had become extremely abusive”. She said their relationship lasted a couple of months in 1979 before he disappeared.

She said that his account that he only had a “one-night stand” with her while he infiltrated the SWP between 1976 and 1979 was false, and he had also deliberately misrepresented how the relationship started.

She said she only discovered that he had been an undercover officer when she had an unexpected visit at home from a member of the inquiry last year.

“The initial revelation of the true identity of a man with whom I had enjoyed an intimate sexual relationship and shared thoughts and feelings of a deeply private nature left me feeling nauseous and revolted. I felt degraded and abused and continue to feel a real sense of violation,” she said.

“In my mind a very different image of Vince is emerging from the one that I remember – an increasingly cold, calculating, sexist version of a man is being revealed, very different from the man I knew or thought I knew. I find that extremely upsetting.

“I had always thought of Vince with fondness. My memory of him was of a lovely, attractive but emotionally vulnerable guy who, because of his experience of heartbreak and fear of being hurt, found it difficult to maintain close relationships with women.”
Add Comment