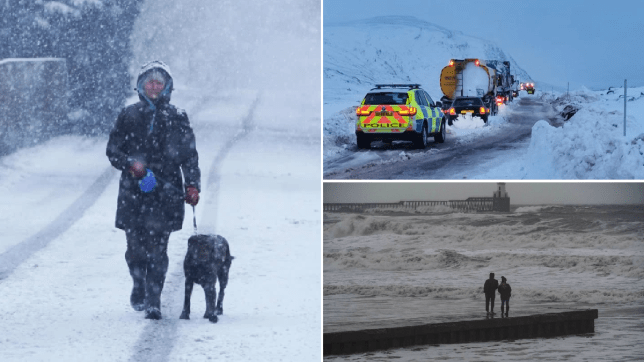 Four days of snow, ice and rain on the way as Storm Darcy hits UK

Four days of snow, ice and rain are set to hit the UK, as Storm Darcy brings gale-force winds.

Amber weather warnings are in place as North and East England brace for up to 30cm of snow.

Widespread travel disruption could be seen in London, the East and the South East of England, as amber warnings are issued for Sunday and Monday morning.

The Met Office has warned people in the South East to expect ‘heavy disruptive snow’ and 40-50mph wind gusts that could cause snowdrifts.

Various warnings for snow and ice across the East are in place until Wednesday, as easterly winds from the Ukraine and Black Sea area bring an intense chill.

Forecasters have warned there will be ‘many similarities’ with the infamous Beast from the East in 2018. However, experts said today the air will not be as bitingly cold.

Meteorologist Sarah Kent said: ‘There will be significant disruptive snowfall across the South East.

‘Within this area, there is a small chance particularly over the Downs of Kent and the North Downs that you could see 25-30cm of snow. 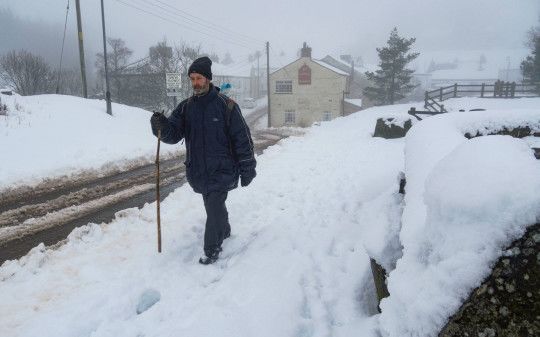 A walker braves the snow in Overwater, Cumbria, on Thursday 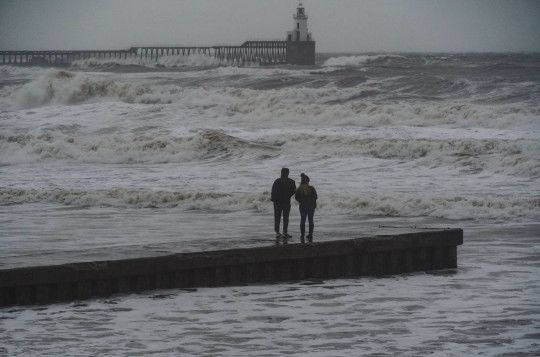 Two beachgoers stand perilously close to the edge of the pier while the North Sea kicks up a storm in Blyth, Northumberland this morning

‘It is a small chance but the threat is there, up to a foot of snow potentially combined with extremely strong easterly winds. Even inland in that area, gusting could be 45mph and higher than that on the coasts.

‘This could lead to significant drifting of any lying snow and obviously blizzards for the snow coming past you for anyone who is attempting to travel.

‘Sadly there will be people who have to make journeys for the emergency services and there are still lorries that have to go to the ports. It is going to be really disruptive.

‘With that sort of snowfall, you would expect some roads to be closed or blocked by the drifting snow, and long delays or some cancellations of public transport.’

She added: ‘We are only looking at significant snowfall tomorrow across the south east of England, so while we have these cold easterly winds it is not as widespread as the Beast from the East in 2018.

‘Tomorrow’s events – the easterly winds originate from Ukraine and the Black Sea – eastern Europe – the air will be cold but it will not be as bitingly cold as it was back in 2018.’

The Dutch named the low-pressure system that will bring the extreme weather to south-east England on Sunday as ‘Storm Darcy’ on Friday night. 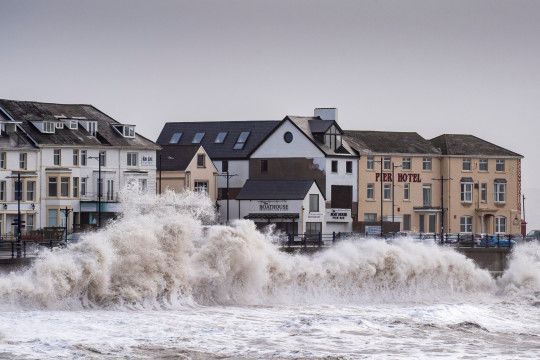 Waves crash against the harbour wall on February 2, 2021 in Porthcawl, Wales

Public Health England (PHE) has issued a cold weather alert for the whole of England from Saturday through to Wednesday.

Dr Owen Landeg, of PHE, said: ‘Cold weather isn’t just uncomfortable, it can have a serious impact on health.

‘For older people and those with heart and lung problems, it can increase the risks of heart attacks, strokes and chest infections.

‘So it’s really crucial at this time, especially ahead of a potentially very cold snap, to remember to check on frail or older neighbours or relatives, especially those living alone or who have serious illnesses.’