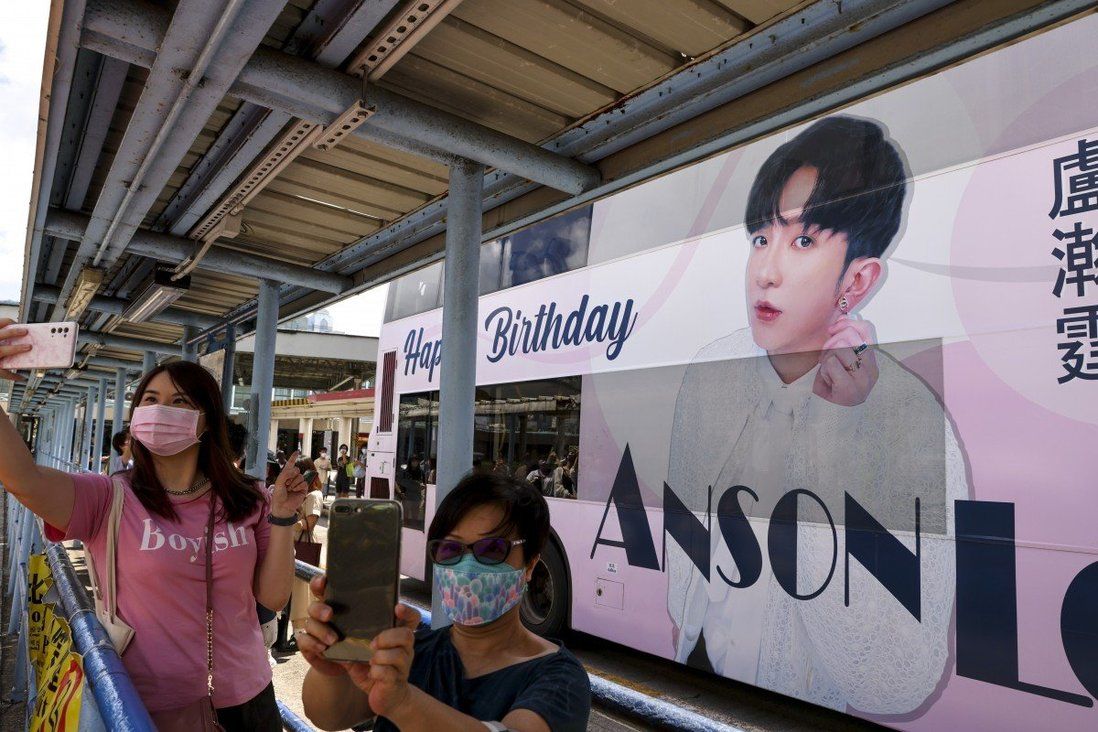 Tongue-in-cheek page, called ‘My Wife Married Mirror and Left My Marriage in Ruins Concern Group’, is clearing-house for good-natured grousing from sidelined spouses.

RC, a former tour guide, had been happily married to his wife for over two years when he recently noticed she was behaving strangely.

The 32-year-old, who asked to be identified only by his nickname, said his wife, a nurse, had suddenly become an expert when it came to printing photos and cardboard cut-outs, an authority on a particular brand of washing machine, and an avid consumer of massive amounts of cosmetics and home goods.

As it turned out, all the goods had been endorsed by local singer Keung To, who rose to fame after joining ViuTV’s reality show talent contest King Maker in 2018. He was one of 12 contestants who stole the show that year, and went on to form the boy band Mirror.

RC learned that his 30-year-old wife and her female friends had recently joined Mirror’s fan club, and had been obsessed with everything about the stars ever since. 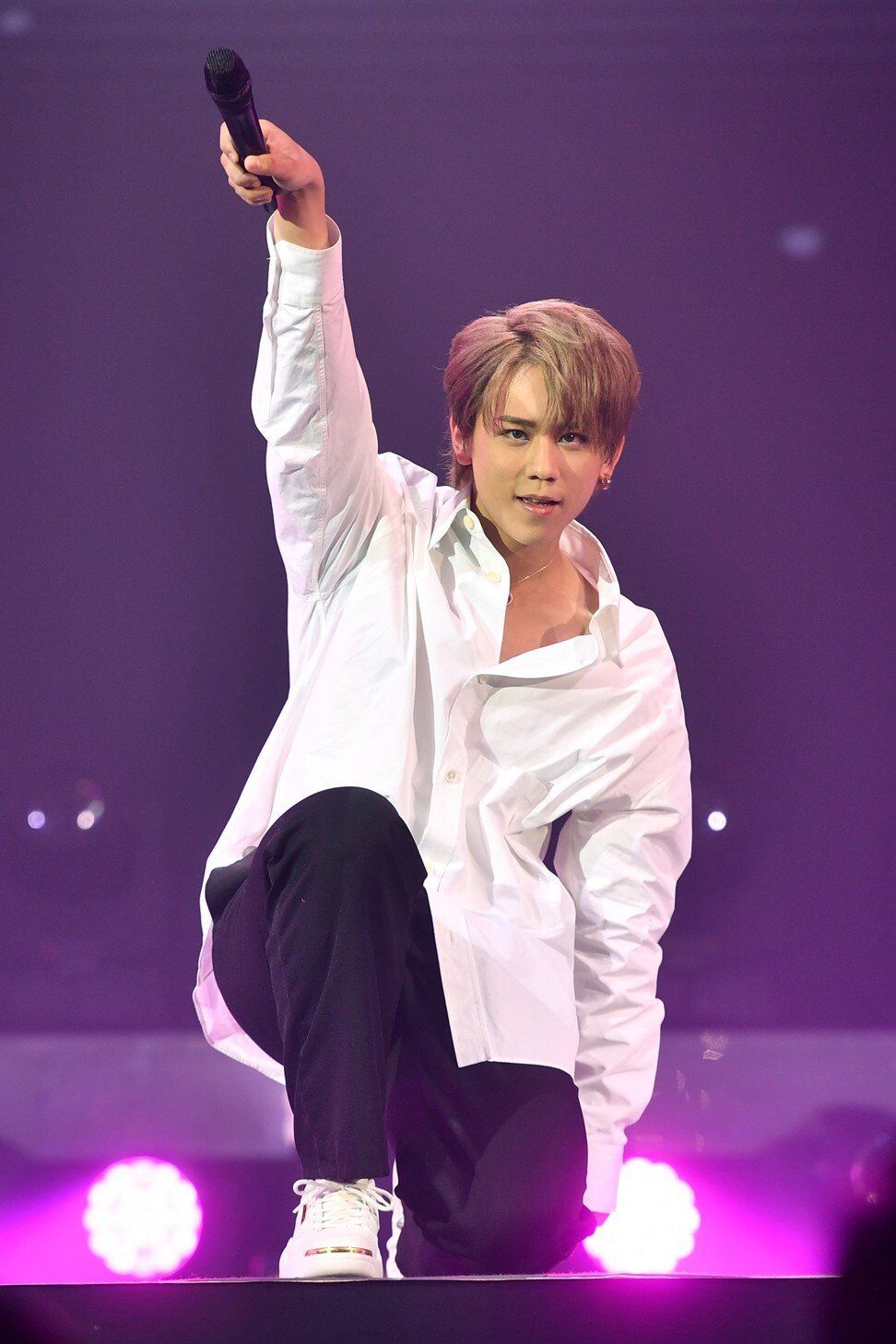 “She never stopped talking about them, and would suddenly turn smitten whenever she saw their pictures or images on the street,” he says.

Last Saturday evening, feeling a bit sore about his wife’s heart being stolen by the young artists, RC started a Facebook page with the aim of uniting other husbands who felt the same.

“I felt that there must be other husbands who felt the same way I did towards their wives adoring these idols,” RC said. “I thought to myself, it would be pretty cool if a few hundred men joined this page, just to vent.”

Little did he know his group would become an overnight internet sensation. The page, jokingly called the “My Wife Married Mirror and Left My Marriage in Ruins Concern Group”, has drawn over 200,000 followers in just three days.

Tens of thousands of Hong Kong husbands claiming to be “victims” of Mirror have flocked to the page to share their stories. In a winking display of self-pity, they have taken to referring to themselves as “the ex-husbands”.

“My wife has forced me to take a new English name, Anson, so that she can tell her friends she is the wife of Anson Lo,” Lo Kwan-ho wrote on the page, referring to Anson Lo Hon-ting, a Mirror member.

The real Anson Lo inspires such devotion that his hardcore fans have crowdfunded some HK$100,000 (US$12,900) to splash his face on a Tsim Sha Tsui billboard and the side of KMB buses as part of a citywide campaign to help him celebrate his 26th birthday on Wednesday. 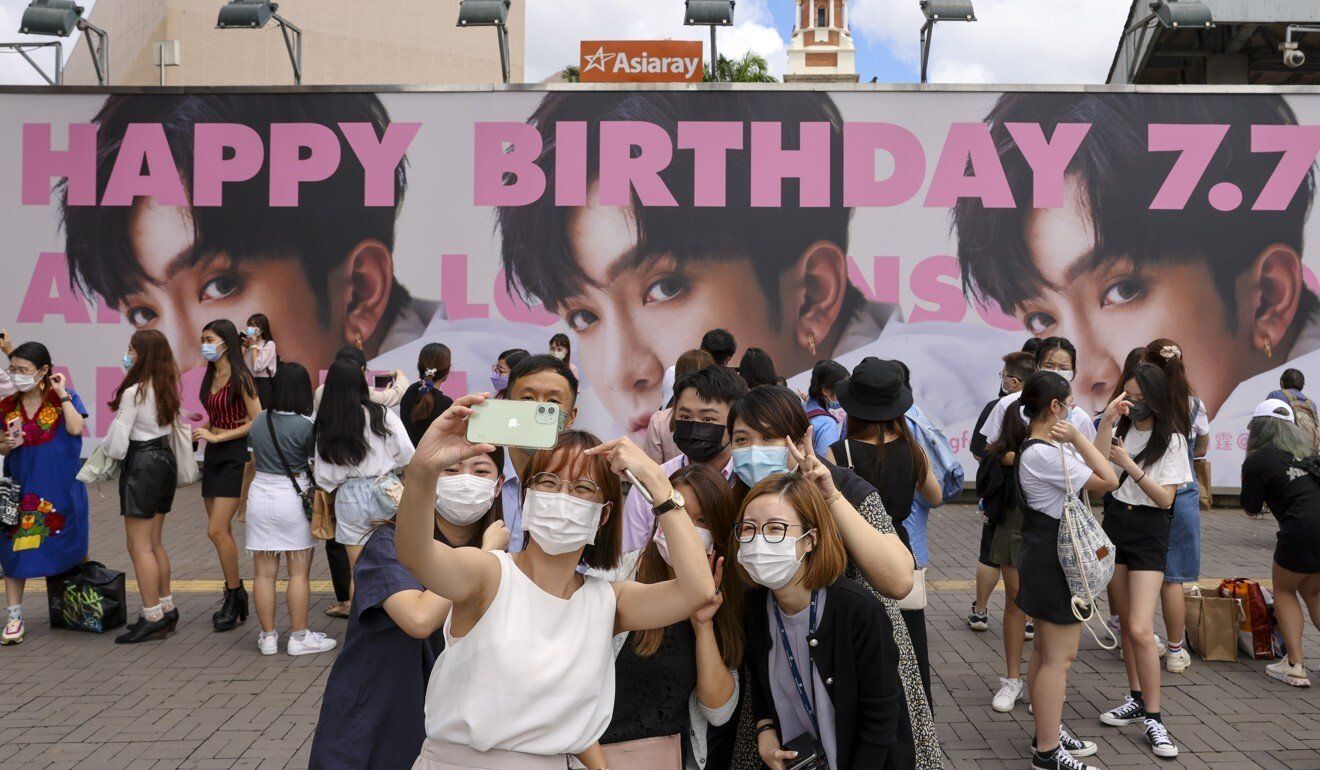 Lo most recently caused hearts to flutter on ViuTV’s latest smash-hit series, Ossan’s Love, a so-called boy love drama adapted from a Japanese series of the same name about a romance between three men, one of whom is middle-aged and married.

In April, Keung To’s superfans turned Causeway Bay into “Keung To Bay” to celebrate his 22nd birthday, placing advertisements on trams in a campaign that allegedly cost some HK$500,000.

But the stars do not just taunt the ex-husbands from signboards and tram stops. Members of the group complain they have invaded their homes too, blaming them for stealing away their better halves. 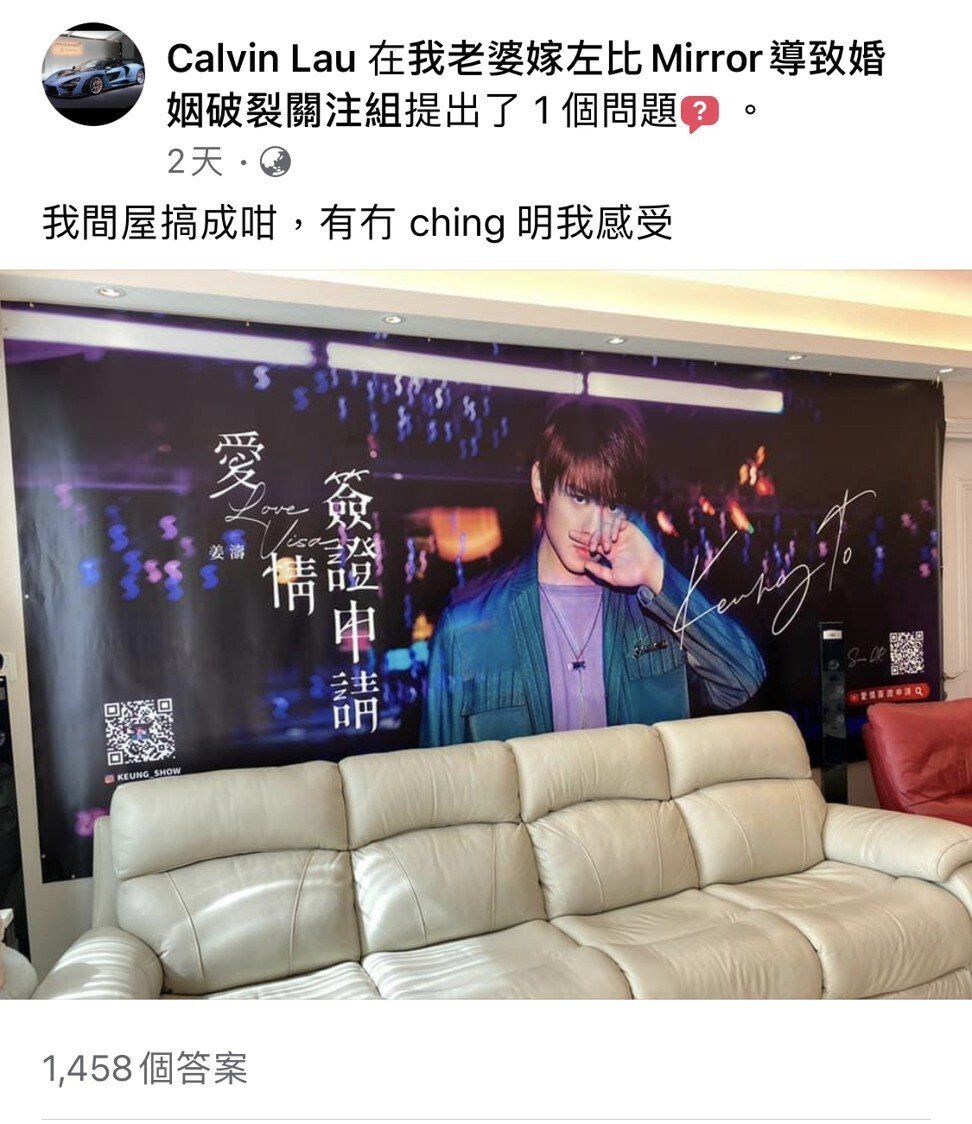 One man said images of Keung had replaced all their wedding photos at home; another complained his wife had put up a massive poster of the singer covering an entire wall of their living room.

Another group member shared tongue-in-cheek “survival tips” on how he made his marriage work by accepting his wife’s heart now belonged to another. In a conciliatory gesture, he gave his lover a life-size pillow printed with a shirtless Ian Chan.

“Who can go further than me? I sleep alongside this guy (the cushion) every night!” he wrote, posting a photo of the pillow, which shows off Chan’s washboard abs. 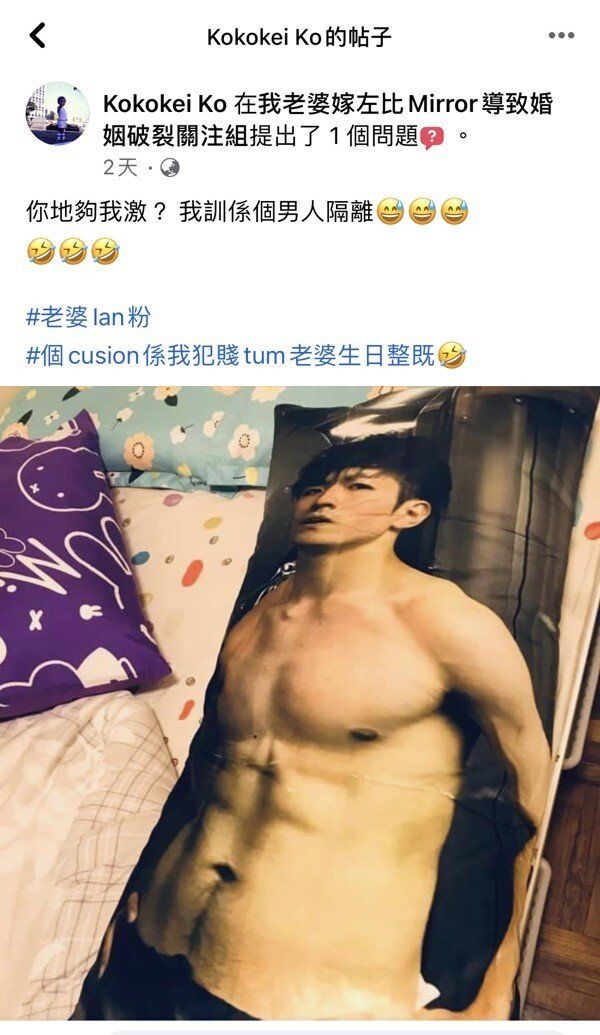 One group member said he had accepted his wife’s obsession with the band, giving her a pillow featuring member Ian Chan.

Now, what began as a men-only pity party has started attracting female followers, too.

Wives and girlfriends have flooded into the page to read their men’s grumbles, often leaving comments praising their significant others for accepting their idols or sharing jokes about them mixing up the 12 members of the band.

A few have even shared their side of the story – revealing that their husbands ended up becoming even bigger fans of Mirror than they were.

On Monday alone, there were over 1,300 new posts on the page. Even Mirror’s talent manager, Wong Wai Kwan – nicknamed Sister Fa – noticed the page and shared it on her own social media, calling it hilarious and directing even more fans to the platform.

“Sister Fa’s husband is the biggest victim of all. We appeal to him to join this group with us,” one member joked. 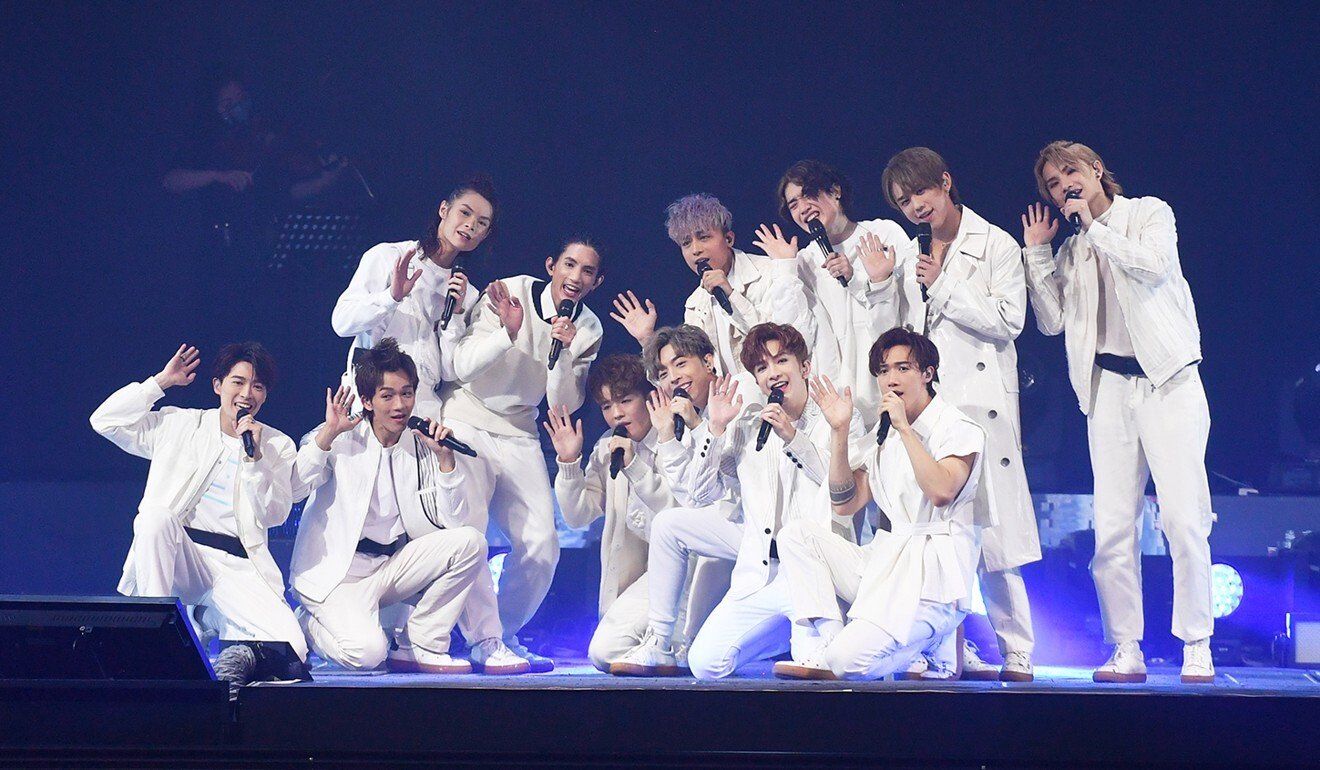 The Canto-pop boy band Mirror has inspired an especially devoted female following, much to some husband’s chagrin.

RC, meanwhile, is still in shock at the sudden attention lavished on his group and how quickly it rose to fame. He said he believed it touched just the right nerve, expressing a feeling shared by thousands of Hongkongers who flocked to the platform for its sense of community.

He also stressed that he personally held no grudges against the young stars, adding that, in fact, he tried to enjoy watching their TV show with his wife.

“They are young, good looking and talented. They are entertaining to watch, and it’s good to have some distractions when society is plunged into such a strong sense of despair and uncertainty,” he said. “I get why they became such a craze.”

He also admitted that after seeing the stories shared by some other group members, he felt better about his own marital situation.

“Compared to other posters’, [my wife] is rather rational,” he said. “At least my home still has more pictures of me than Keung To – for now!”

Right now, RC said he has no plans for what this page might become.

“I only ask the wives to move the promotional content about Mirror to their fan pages instead of here, leaving this just as a place for them to understand their husbands.”

RC also noted that he moderated comments on the page, removing hateful ones to make sure all the grousing was in good fun. But some of the jokes still contain a kernel of truth.

“Can Sister Fa stop Mirror from featuring luxury products?” one poster pleaded. “If this continues, we will all go bankrupt!”