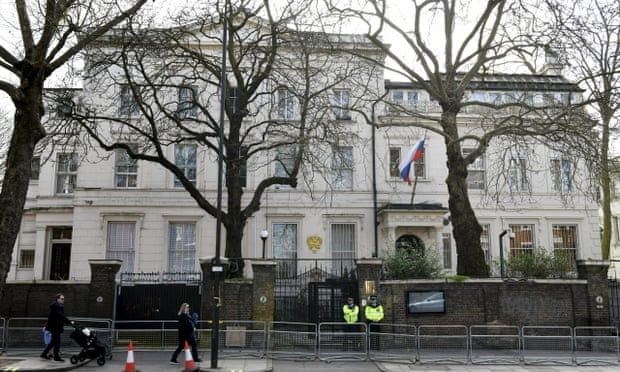 Plans to require lobbyists, PR firms and other professionals in the UK to register their work for Russia, China or any other foreign country have been unexpectedly left out of the national security bill published on Wednesday.

Insiders said key decisions about what activities would have to be registered had yet to be taken, meaning the foreign agent scheme will have to be introduced via a government amendment to the bill in a few weeks.

A broad definition could require universities and thinktanks to disclose sources of foreign state funding, but there has been concern that simply receiving money from abroad does not turn an organisation into a lobbyist for a hostile state.

Whitehall sources said the delay had been partly caused by the war in Ukraine. “Some of the people working on the policy ended up working on other things,” one said, and new ideas had emerged in response to the Russian invasion.

There have been calls for the UK to introduce a two-tier system, imposing different requirements on Russia, China and Iran and other states deemed to be hostile to the UK, and a lower requirement on allies.

The Conservative MP Bob Seely discussed options for a foreign agent registration scheme in a pamphlet last year and proposed a differential approach. “The threat to democratic transparency from Chinese state entities or Russian oligarchs is greater than, for example, the New Zealand tourist board,” he said.

The planned foreign agent registration scheme was billed as a key element of the national security bill, the biggest revision to espionage legislation since the late 1980s, and highlighted in the past 24 hours by Downing Street and ministers.

Overnight, Priti Patel, the home secretary, had said the bill would require “individuals to register certain arrangements with foreign governments, to deter or disrupt state threats activity in the UK”, but she made no reference to the delay.

On Wednesday officials declined to say which individuals would be covered, and whether they would include lawyers or academics working on behalf of a foreign state as well as lobbyists and public relations agencies. The situation would become clear when the amendment was published, they said.

Britain has also become concerned about Chinese espionage on its territory. This has been heavily focused on obtaining trade and commercial secrets, but there are signs that Beijing has been seeking political influence too.

In January MI5 circulated a rare interference alert, warning that Christine Lee, an Anglo-Chinese lawyer, was seeking to improperly influence MPs and peers on behalf of China’s ruling Communist party. However, Lee was not subject to any criminal prosecution, despite the allegation she was a Chinese agent.

The national security bill will not be retrospective but is intended to allow for the prosecution of similar cases in future by updating the definition of espionage. Much of Britain’s official secrets legislation dates back to acts passed in 1911, 1920 and 1939 and relies on archaic terms, criminalising the passing of sketches to the enemy.

If the bill is passed, anybody found guilty of disclosing “protected information” that is prejudicial to the safety or interests of the UK to a foreign power could be sentenced to life imprisonment. Disclosing trade secrets or helping a foreign intelligence agency could lead to a 14 years in prison, and for the first time it will be illegal to be a covert foreign spy.

However, there will be no government attempt to revise the 1989 Official Secrets Act, which covers the unauthorised disclosure of classified government information, including by whistleblowers, because there was no public consensus on how to proceed.

Campaigners had called for the introduction of a statutory public interest defence to protect leakers – people such as the former civil servant Clive Ponting – who in the past have been prosecuted. But Whitehall sources said such reform was opposed by the intelligence agencies and so any reform of the 1989 act would have to wait.
#priti patel
Add Comment