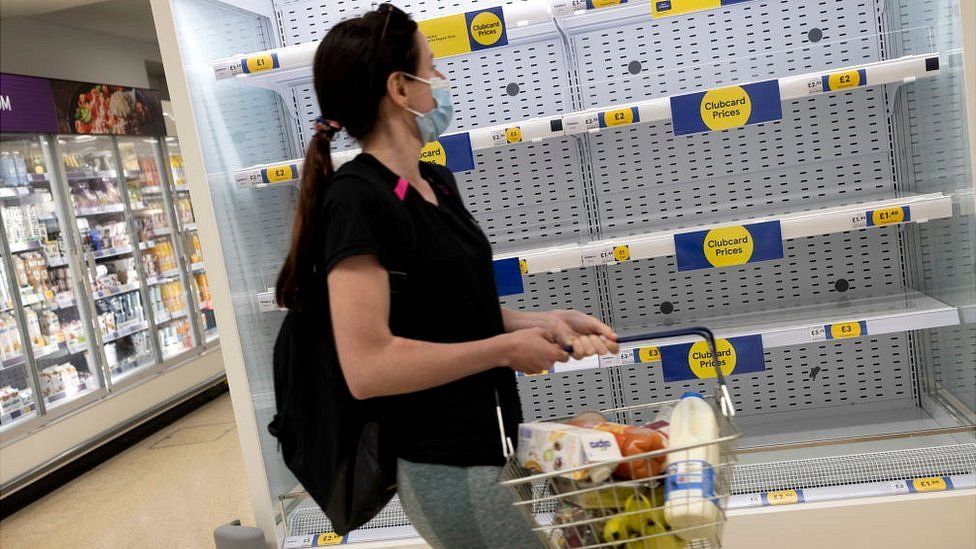 Labour shortages in the food industry means consumers may not be able to find the products they like in supermarkets, an industry boss has warned.

"The just-in-time system is no longer working and I don't think it'll work again," Food and Drink Federation (FDF) boss Ian Wright said at an Institute for Government event on Friday.

Mr Wright warned that the UK was in for permanent shortages.

However, it didn't mean the country would run out of food, he stressed.

But a spokesman for the government said it did not recognise claims of permanent shortages.

"The UK has a highly resilient food supply chain which has coped well in responding to unprecedented challenges," he said.

"We are taking steps to support businesses tackle a range of issues, from the pandemic to a Europe-wide shortage of HGV drivers."

He added that the support included expanding the Seasonal Workers Pilot to 30,000 visas for workers to come to the UK for up to six months, as well as a package of measures to help tackle the HGV driver shortage that will streamline the process for securing a licence.

The FDF represents more than 800 food and drink companies in the UK.

Mr Wright stressed that "the UK shopper and consumer could have previously expected just about any product they want to be on the [supermarket] shelf or in the restaurant all the time.

"That's over. And I don't think it's coming back."

And as the sector adapts to structural changes in the labour market, Mr Wright said that firms are having to make decisions over which products to prioritise.

"Last week, the whole of the east of England was basically unsupplied with bottled water because it was just not possible for the businesses that move that stuff around to supply that and everything else," he explained. 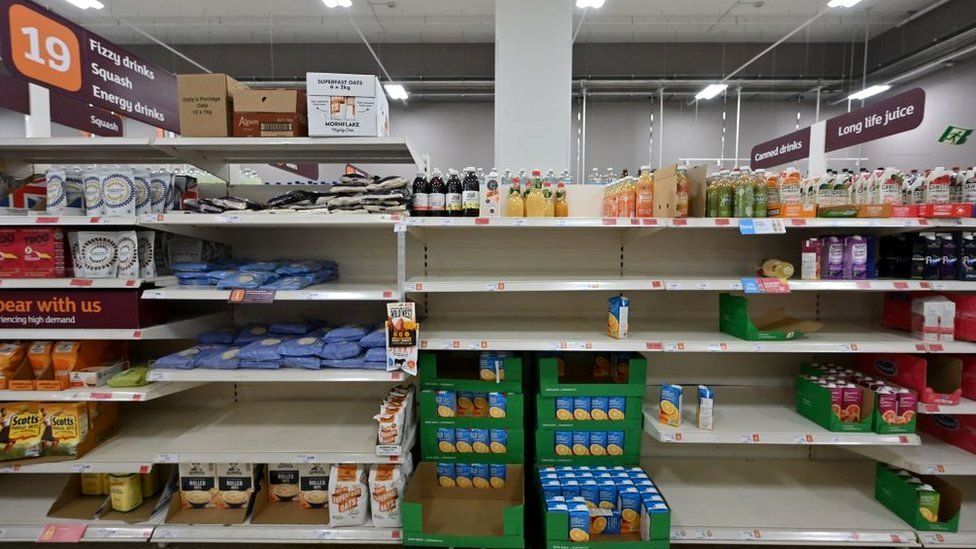 Empty shelves seen at a Sainsbury's in London in September, which has been blamed on the lorry driver shortage

"So businesses took a decision to prioritise products with a higher margin."

According to the FDF, the food and drink industry is short of around half a million workers - or one in eight of the total workforce.

Mr Wright said the shortage is "driven by a combination of a number of factors". He warned that the resulting supply chain issues are "going to get worse", adding that "it's not going to get better after getting worse any time soon".

Several companies including supermarkets, pubs and restaurants have blamed a lack of heavy goods vehicle (HGV) lorry drivers for causing problems in their supply chains, including shortages of some products.

Lorry driver shortages have also have been blamed on EU workers leaving the UK following Brexit as well as during the pandemic and tax changes making it more expensive for drivers from elsewhere in Europe to work or be employed in the UK.

Mr Wright said that thousands of workers had switched to the online retail sector since the pandemic.

"It's almost certainly the case that one of the main drivers in the lorry driver shortage that we're facing is that qualified HGV drivers have gone into being distribution drivers for Tesco and Amazon, because they're nicer jobs, they don't require you to get up at 4am and they're better paid," he said.

"That is a structural change that won't reverse itself."