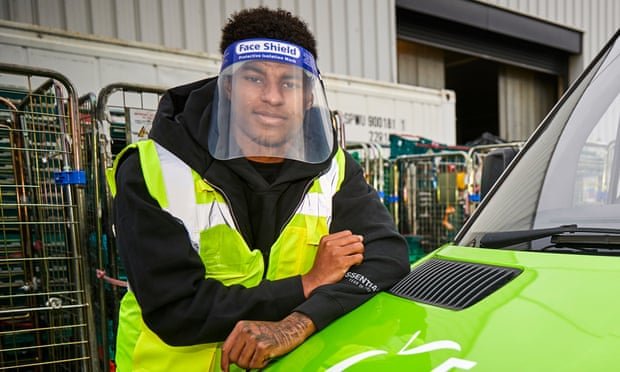 Ministers are under pressure to overhaul the way in which free school meals are being provided to vulnerable children under the latest lockdown, after Marcus Rashford highlighted “woefully inadequate” food parcels estimated to be worth little more than £5.

One was made up of a white loaf, a pack of sliced cheese, two potatoes, two carrots, two bananas, two mini Soreen bars, two tubes of Frubes, a tin of beans, a small bag of pasta and three apples.

Commenting on the photograph, Bridget Benelam of the British Nutrition Foundation said: “The variety of foods shown in this image is very limited, especially when it comes to fruit and vegetables and protein-rich foods. A balanced lunch for a child should provide some starchy foods, wholegrain where possible, at least one and ideally two or more portions of fruit and vegetables, some protein-rich foods like beans, eggs, fish or meat and some dairy foods or alternatives.”

According to Twitter user Roadside Mum who posted the picture, the parcel was supposed to provide the equivalent of the two weeks’ worth of £15 free school meal vouchers provided to parents and carers in the first lockdown – or £30 worth of food. “I priced that like-for-like from Asda and it came to £5.22. Where’s the other £25,” she said.

Chartwells, the school catering company that supplied the package, claimed the photograph showed five days of free lunches, not 10, and the charge for food, packing and distribution was £10.50 not £30, but added: “We are very sorry the quantity has fallen short in this instance.” A spokesperson said: “Our 10-day hampers typically include a wide variety of nutritious food items to support the provision of lunches for children.”

The company announced late on Tuesday that it would be refunding the costs of any below-standard parcels, would contact schools to understand where any shortages may have occurred, and from next Monday would ensure food hampers reflect the additional £3.50 funding allocation for each pupil receiving a food parcel at home.

The children and families minister, Vicky Ford, said: “The photos being shared on social media today are completely unacceptable and do not reflect the high standard of free school meals we expect to be sent to children.

“Chartwells has rightly apologised and admitted the parcel in question was not good enough. I met their managing director earlier today and he has assured me they have taken immediate action to stop further deliveries of poor-quality parcels. They will ensure schools affected are compensated and they will provide additional food to the eligible child in line with our increased funding.”

Ford said the government will demand all caterers meet the standards set for high quality lunches, adding that they would set out further details on Wednesday.

Footballer and campaigner Marcus Rashford, who forced the government into a U-turn on funding free school meals during the holidays, had earlier described the food parcels as unacceptable and demanded swift action, tweeting: “Something is going wrong and we need to fix it, quickly!”

Some schools have already opted out of providing parcels in favour of established local voucher schemes. Cllr Ed Davie, Lambeth council’s cabinet member for children and young people, said all 90 schools in the borough had chosen to keep the voucher system it adopted over the Christmas holidays, rather than use parcels.

“We want families to have cash or vouchers because it is more dignified and affords them more choice in what food they buy,” Cllr Davie said.

Labour has called for the government to restart the national food vouchers scheme, which operated during the first national lockdown. Labour leader Keir Starmer tweeted: “The images appearing online of woefully inadequate free school meal parcels are a disgrace. Where is the money going?”

Other food parcel photos on social media included one posted by Lisa T, which included half a carrot, half a pepper and portions of food packed into small bank-style clear plastic bags. “It wasn’t nice, when you are already feeling at rock bottom to then be given this. But it was rectified very quickly by our school and for that I’m very grateful,” she tweeted.

Cook, food writer and anti-poverty campaigner Jack Monroe retweeted examples of hundreds of messages sent to her regarding the food parcels, using the hashtag #bringbackvouchers. Calling them “ill-thought through, meagre scraps” she compared the parcels with a voluminous spread of £20 worth of food bought at her local supermarket two months ago. “Have we had enough examples yet that they can’t say this is an isolated incident or do I need to keep going?!” she tweeted.

There were calls for the system to be replaced by a “cash transfers” in which families were supported directly through payments made via child benefit or universal credit. Prof Greta Defeyter of Northumbria University, an expert in school food, said: “Cash first is the easiest and most effective route in ensuring families are supported with dignity, respect and freedom of choice.”

The DfE guidance says there are “significant benefits” to offering food parcels, including “the confidence that a nutritious and varied range of food is being provided in line with guidance”. An added benefit, it says, is “the continuation of financial support to school caterers”. It says food parcel contents should be sufficient to “allow parents and carers to prepare simple and healthy lunches for their children across the week”.

A statement by LACA, the professional body for school meals providers, which helped draw up the DfE guidance, said: “[We are] disappointed to see the pictures of food parcels circulating on social media. They simply do not meet the standards.”
Add Comment