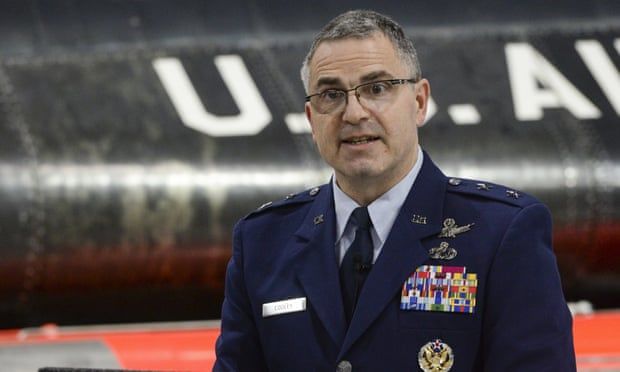 In the first-ever military trial for a general in the 75-year history of the US air force, a two-star general was found guilty Saturday of abusive sexual contact for forcibly kissing his sister-in-law after a family barbecue.

Maj Gen William Cooley faces up to seven years in prison, a dishonorable discharge and the loss of his air force pay and benefits at a sentencing hearing scheduled for Monday.

The woman, his brother’s wife, said in a statement that she pursued a case because her two daughters “deserve a world, deserve a system, military or otherwise, where they never have to be complicit in a lie to protect a power structure, protect a predator”.

She said she felt accompanied throughout Cooley’s weeklong trial by the spirit of Vanessa Guillen, the soldier who was sexually harassed and killed at Fort Hood in 2020.

“With today’s actions, I hope that the world they live in is just a little safer,” she said.

Her attorney, Ryan Guilds, said the woman gave permission to disclose her familial relationship to Cooley so that the public had a full understanding of the case.

An attorney for Cooley declined to comment Saturday, saying the matter remained open. He can appeal the verdict.

During the trial, which began 18 April, military prosecutors accused Cooley of drinking heavily at a family cookout in New Mexico in 2018 and then trying to force himself on his sister-in-law, after spending years fantasizing about seducing her, they said.

She had driven Cooley to another family home to pick up some belongings after the barbecue when he attempted to place her hand on his crotch, kissed her forcibly while pushing her into the car window, and then groped her breasts and genitals, prosecutors claimed.

Prosecutors said Cooley admitted what happened in a note to his sister-in-law and brother, as well as in emails to himself that he later deleted.

In the family note, Cooley reportedly wrote of being stunned that he hurt the couple “for his own selfish ego”. He also recounted how he saw the car ride with his sister-in-law as a chance to add another attractive woman to his list of romantic conquests, prosecutors alleged.

The air force removed Cooley as commander of the branch’s prestigious research lab at Wright-Patterson air force base in Ohio in January 2020 after the woman reported him to the branch. Military prosecutors ultimately charged him with abusive sexual contact, alleging that there were three elements to the offense: forcibly kissing the woman, groping her breasts and fondling her genitals.

Cooley pleaded not guilty and chose for his case to be heard by a judge, rather than a jury. He also opted against testifying in his own defense. His legal team argued that he did nothing more than share a consensual kiss with his sister-in-law. She did testify, sharing her account from the witness stand on Tuesday, the first day of testimony.

The military judge, Col Christina Jimenez, began deliberating Friday and on Saturday convicted Cooley of the forcible kissing while finding him not guilty of either groping charge.

The verdict is the first of its kind in the air force’s 75-year history.

Cooley’s prosecution unfolded as the US military has been working on reforms to its handling of sexual misconduct allegations in the wake of a series of scandals, such as the case of Guillen who complained that a sergeant was sexually harassing her before she was bludgeoned to death by a fellow soldier, who later killed himself.

A statement from Eric Mejia, a colonel and staff judge advocate for Air Force Material Command, to the Associated Press said Saturday’s verdict “clearly demonstrates the commitment of air force leaders to fully investigate the facts and hold airmen of any rank accountable for their actions when they fail to uphold air force standards”.
Add Comment