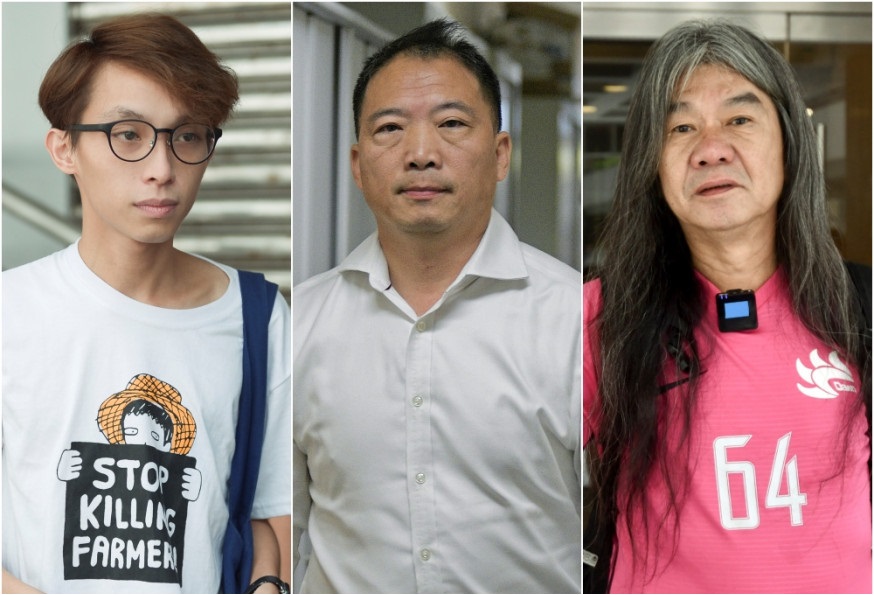 Chan, 25, Wu, 58, and former district councillors Andy Chui Chi-kin, 53, and activist Bull Tsang Kin-shing, 64, pleaded guilty to inciting others to take part in an unauthorized assembly – the July 1 protest last year which was banned by the police.

Chan and Leung also pleaded guilty to taking part in the assembly.

They appeared before judge Douglas Yau Tak-hong in District Court on Thursday.

Another defendant, Lancelot Chan Wing Tai, 57, pleaded not guilty to the incitement charge. His case has been adjourned to June 27, 2022.

According to prosecution, the now defunct Civil Human Rights Front – which organized the July 1 protest in previous years – applied to stage the July 1 assembly back in March last year, expecting around 100,000 people to join.

The police then banned their application citing health and public order concerns. The front filed an appeal later but it was rejected by the police.

Chan, Tsang, Chui, Wu and Chan then held a press conference on June 30, 2020 outside the Court of Final Appeal. They held banners that read “Say no to national security law! Let's take to the street on July 1!” They also chanted slogans “See you on the streets on July 1!” and spoke to media.

Chan called upon people to join the protest on social media, stating that he was one of the organizers of the assembly. Tsang, Chui, Wu, Leung and Chu also promoted the protest online.

On July 1, 2020, huge crowds gathered in Causeway Bay. Chan and the other activists led the march, walking from Hennessy Road heading to Tonnochy Road. They encountered anti-riot cops and water-cannon vehicles as they reached a junction between the Tonnochy Road and Gloucester Road.

The crowd soon dispersed. There were clashes between some protesters and the police, causing shops to close temporarily.
Add Comment