There is a marked shift in the Bank's outlook and plan to tackle inflation as it signals there is a chance of more aggressive action ahead to help cool the pace of price growth in the economy.

The Bank of England has raised interest rates for the fifth time in a row to 1.25% and set the scene to act more "forcefully" ahead because of a mounting inflation threat.

There had been speculation of a more aggressive tightening after the sharpest rate hike since 1994 of 0.75 percentage points was imposed by counterparts at the US central bank last night.

But the UK's Bank rate was raised by 0.25 percentage points, as financial markets and economists had expected, continuing the gradual increases that began in December last year as the rate of inflation gathered pace.

However, the Bank said on Thursday it was now forecasting that the headline rate of inflation would top 11% in the autumn - a rise of almost 1 percentage point on the figure it had expected just last month to see at the year's end. 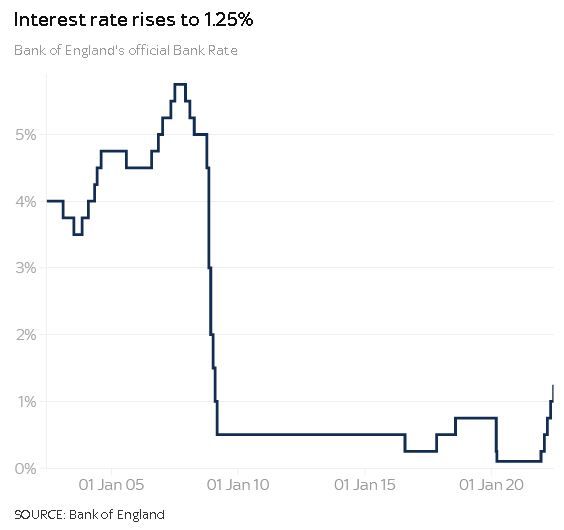 The rate-setting committee was split 6-3 on the rate hike vote, with the minority favouring a rise of 0.5 percentage points.

The BoE dropped its guidance from May when it said most committee members believed "some degree of further tightening in monetary policy may still be appropriate in the coming months".

Crucially, the minutes of the latest meeting read: "The committee will be particularly alert to indications of more persistent inflationary pressures, and will if necessary act forcefully in response."

That was seen as guidance that, as far as Bank rate is concerned, there was now a greater chance of a 0.5% percentage point increase ahead.

As the Bank was giving its update, growing fears of a global recession were continuing to take a hold of financial markets, with stock markets in Europe widely down by more than 2.5% as the recent rush for safe havens reared its head again.

The reopening of economies after the pandemic and, latterly, the effects of Russia's war in Ukraine have been responsible for the bulk of the soaring costs across the world.

The UK's main inflation measure has since hit a 40-year high, leaving economic growth intensely choked by a cost of living squeeze that is only tipped to intensify as energy, food and fuel bills rise sharply.

The anticipated rise of more than £800 in the energy price cap due in October was largely responsible for the adjustment to the Bank's inflation forecast.

Its latest rate action will mean there is further pain for millions of mortgage holders on tracker or standard variable deals.

There is some small relief for savers as savings rates lag inflation considerably.

Although many of the price increases in the economy are outside the Bank's control, it is keen to keep a lid on rises in wages for fear that levels matching the pace of price increases will only make the inflation problem worse.

Its plea for wage restraint has come under attack from unions, which argue that plunging living standards are no fault of their members.

The rail network is set to become the first national battleground in strike action expected to start next week.

Chancellor Rishi Sunak, who has delivered two rounds of financial help to help with rising living costs to date, welcomed the Bank's move but the reaction from business groups was more cautious.

"But with the outlook looking weaker, monetary policy is walking an increasingly fine line between taming inflation and supporting economic activity.

"We expect only meagre economic growth ahead, as a historic squeeze on household incomes bites hard on spending.

"Monetary policy can only do so much, and must now be coupled with government action to prevent a deeper and more prolonged downturn."