A female former Royal Navy sailor, who says she was raped on a ship, has spoken of her anger at claims that servicewomen are still being abused.

The Royal Navy has launched an inquiry following sexual harassment allegations in the Submarine Service.

"Catherine" told BBC Radio 4's Woman's Hour she didn't feel she could report her rape, which led to a pregnancy.

Defence Secretary Ben Wallace said he was very serious about tackling the issue and things were changing.

In October, claims from several women that they had faced mistreatment over the course of a decade, were described as "abhorrent" by the head of the Royal Navy.

Adm Sir Ben Key, the First Sea Lord, said at the time that sexual harassment would not be tolerated and anyone found culpable would be "held accountable".

Catherine - not her real name - says men were still adapting to working alongside women when she joined the Royal Navy. Women have served at sea since 1990 and on submarines since 2011.

Catherine says her rape was the most serious incident, but that she was also sexually assaulted and regularly experienced harassment.

The assaults left Catherine in need of medical treatment. "I did sustain some injuries. I had some bruising and some cuts."

In another incident, she recalls her supervisor putting his penis on her shoulder as she typed at her desk. She says she couldn't believe what was happening - and what to do next. "Do I say anything and make a big scene of it? Do I carry on [typing] and hope it goes away?'"

She also says she was slapped on the bottom and heard men discuss how drunk they would have to be to have sex with women they considered ugly. As a result, she says, she deliberately tried to put on weight. "If you are too big or too ugly, you're less likely to be a target." 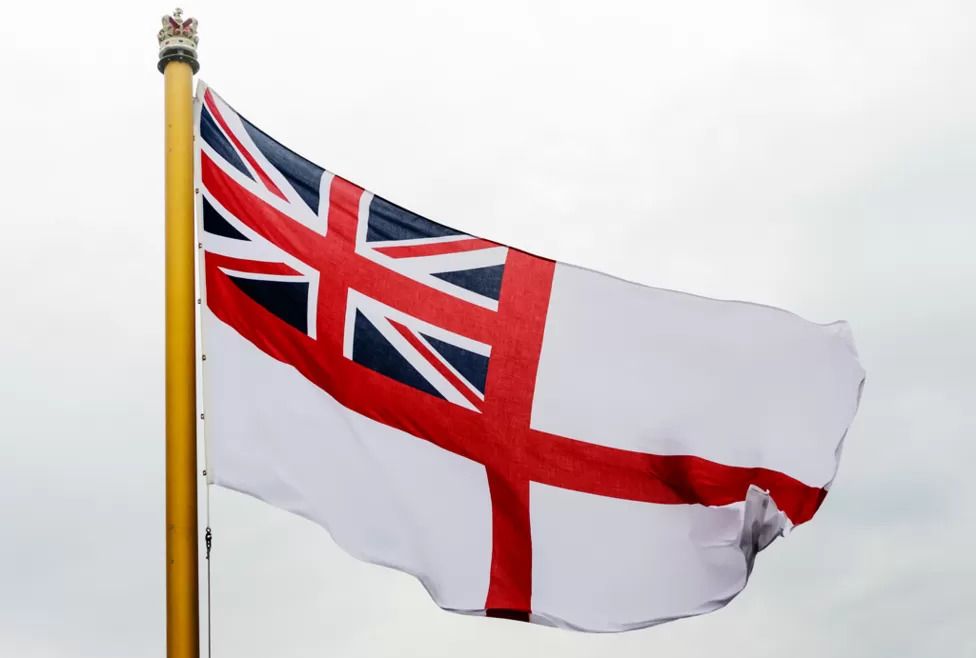 The White Ensign is flown on Royal Navy ships and shore establishments
The rape left Catherine pregnant. The physical scars left behind after the sexual assaults meant she worried about giving birth.

"It makes me really sad to think I went through this now - but at the time I was begging my midwife to allow me to have a Caesarean because I couldn't bear anyone to see any damage or anything that had been caused previously."

Catherine says no-one close to her knows about the rape - and she is now, years on, receiving mental health support.

At the time, she says she didn't report the rape because she was young and worried about being labelled a troublemaker. She says the culture was very much: "Put up and shut up if you want your career."

No-one thought to ask how she had fallen pregnant - she says - given that intimate relationships are banned on ship. One very senior officer - who didn't know about the rape - told her she was "bringing shame on the Navy" because she was a single female who had become pregnant at sea. He told her - she recalls - that if she was his daughter he would be "very ashamed".

If the officers she could potentially approach to report the attack were already suggesting she had done something wrong without knowing the facts - then how could she complain?

"It was all a question of, 'This is the shame that you're bringing on. It's not long that women have been at sea. Women have fought for this position and you've created another issue.'"

After telling the senior officer that she was pregnant, Catherine says she was given days off to go home and contemplate her future. The officer even hinted at her having an abortion.

"He didn't use the word abortion. But he did tell me that an appointment could be made for me the following week and I could be back on the ship by a few days late."

In a statement, an Ministry of Defence (MoD) spokesperson said: "While we cannot respond to such historic allegations directly, we take any complaint of this magnitude extremely seriously and are ready to take forward any and all evidence the individual involved may wish to share."

Catherine says she knows other of female service personnel, working across the UK armed forces, who have become pregnant through sex which "may not have been consented to". While she is "really proud" of her naval career and had some happy times, she says she was not surprised to read about the recent allegations of sexual harassment in the Royal Navy.

"I was angry that this kind of behaviour is still going on," she says - adding that the MoD "actually still haven't got to grips with how men and women can work alongside each other".

Part of her feels that women should not have felt forced to speak to a newspaper in order to have their voices heard.

"Perhaps if some of us in the past had been a bit more vocal - and made a few more complaints and waves - they may not have been subjected to this now," she says.

"If we don't all speak up and have a voice, it's going to carry on."

Catherine believes the recent allegations concerning the Submarine Service need to be investigated by an external agency.

Defence secretary Ben Wallace told the BBC in statement: "The military I left 25 years ago is a very different Armed Forces and I would challenge the assertion that the reforms we are making aren't changing things."

He added: "We are removing service complaints from the chain of command, investing in a new serious crime unit across all services, linking poor responses by commanders to their careers, taking fast administrative action to remove people when required, and ensuring a stricter code of Crown Prosecution Service or Service Prosecuting Authority trial paths than ever before."

Mr Wallace said that many of the serving personnel he encounters, including to Servicewomen's Network, agree that things are improving.