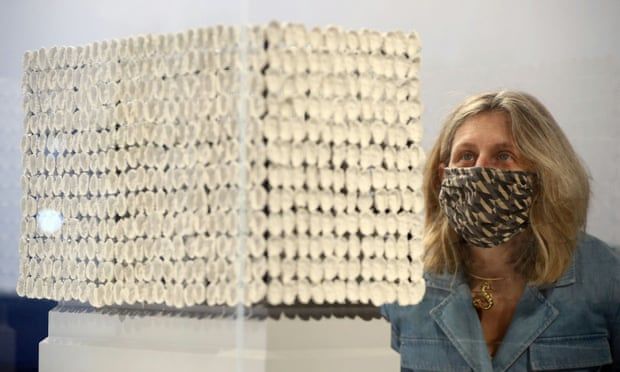 Casts of the faces of 850 trans people are to be arranged around the fourth plinth in Trafalgar Square, central London, for one of the world’s highest-profile contemporary art commissions.

The work, by the Mexican artist Teresa Margolles, will appear in 2024.

It will be preceded by a sculpture by Samson Kambalu based on a 1914 photograph of the preacher John Chilembwe, a hero of African independence, and the English missionary John Chorley.

Kambalu’s work will appear in 2022. It will follow the current sculpture of a giant dollop of whipped cream with a fly and cherry on top, the work of Heather Phillipson, which will remain until September 2022.

The two new works were chosen from a shortlist of six artists, with the public also invited to have their say. Almost 17,500 people voted. 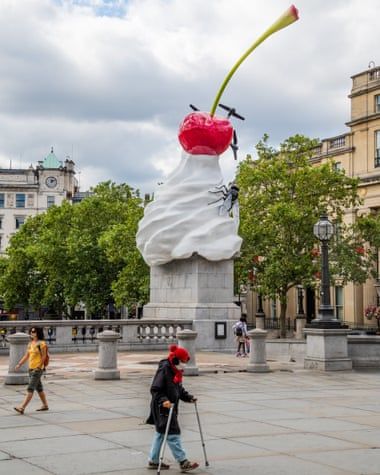 Heather Phillipson’s The End, currently on the fourth plinth.

Ekow Eshun, the chair of the fourth plinth commissioning group, said they received more public votes than ever. “This year was an incredibly strong shortlist from six incredibly exciting contemporary artists,” he said. “I am thrilled at the outcome and very much looking forward to seeing the new works on the plinth.”

For her work 850 Improntas (850 Imprints), Margolles will take casts of the faces of trans people from London and around the world. These “life masks” will be arranged around the plinth in the form of a tzompantli, a skull rack from Mesoamerican civilisations that was often used to display the remains of sacrifice victims or prisoners of war.

Her expectation is that London’s weather will mean the work deteriorates and fades away, leaving “a kind of anti-monument”.

Margolles’s work always seeks to make an impact. She represented Mexico at the 2009 Venice Biennale where the marbled floors of a Venetian palace were swabbed with the diluted blood of gang war victims.

In 2012 she won the Artes Mundi prize, displaying works at the National Museum of Art in Cardiff that had bloody floor tiles she took from the building where a friend was murdered. Also on display was water used to clean bodies in a morgue, dripping and sizzling on hotplates. A third work had sounds from a murder victim’s autopsy.

Malawi-born Kambalu lives and works in Oxford where he is an associate professor at the Ruskin School of Art and a fellow of Magdalen College. 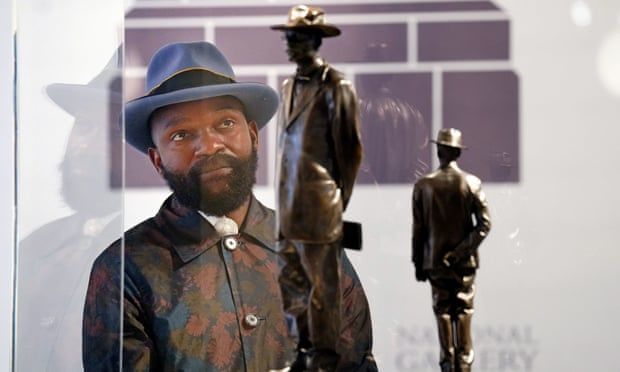 Artist Samson Kambalu with a model of his planned fourth plinth sculpture.

Kambalu said he felt “excitement and joy” to be chosen as the next artist on the plinth. “For me this is like a litmus test for how much I belong in British society as an African, a cosmopolitan.”

When he was invited to pitch, he knew immediately that Chilembwe would be his subject. He is not that well known but was a hugely important figure, said Kambalu. “He was the first African to step up as a modern African, beyond tribal divisions … he is a figure of Malawian modernity and he has always inspired me as an artist.”

His work will restage a photograph taken in 1914 at the opening of Chilembwe’s new church in Nyasaland, now Malawi. Chilembwe has a hat on, in defiance of the colonial rule that forbade Africans from wearing hats in front of white people.

Chilembwe distributed the photograph as propaganda before leading an uprising against colonial rule. He was killed and his church, which had taken years to build, was destroyed by military police.

Kambalu said there was a performative side to Chilembwe which appealed to him. “I think his uprising was more symbolic. I don’t think he had any hopes he was going to win.”

He plans to show Chilembwe as larger than life, while Chorley will be the size of other statues in the square.

The two artists were chosen from a shortlist that also included proposals by Nicole Eisenman, Goshka Macuga, Ibrahim Mahama and Paloma Varga Weisz.

The first fourth-plinth commission was Mark Wallinger’s Ecce Homo in 1999. Since then the works have included Alison Lapper Pregnant by Marc Quinn, Nelson’s Ship in a Bottle by Yinka Shonibare and Really Good, David Shrigley’s 7-metre-high thumbs up in 2016.