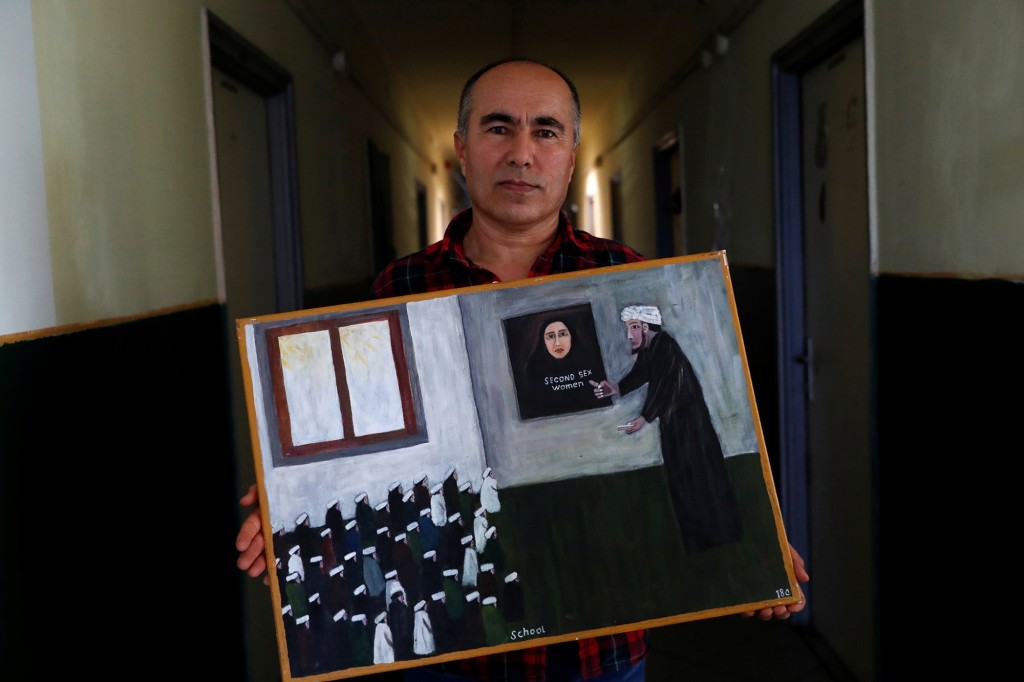 While the Taliban have promised to allow women more freedoms this time, they have so far reopened schools and most workplaces only to men and boys.

Murad Sharifi, a refugee from Afghanistan, works at a kebab place and lives in a shelter for the homeless in Budapest’s outskirts. His tiny room is filled with dozens of paintings depicting a colourful but ominous world, of Afghan women clad in long black burqa gowns, surrounded by hostile men.

Sharifi, who fled to Hungary during the 2015 migration wave with tens of thousands of other asylum-seekers, says it is his “obligation” to show the oppression faced by women in his home country, worsening since the Taliban takeover in August.

He was drawn to paint “to express women’s pain, and my own feelings”, he said in his bare-walled room, where his canvasses jostle for space with two small beds, two chairs and a table.

Some of his more joyful works depict couples among leafy trees. But most feature starker scenes. In one, which he describes as an illustration of women’s oppression, a woman is shown in a meat grinder with a bearded man squeezing her neck and pushing her down. In another, a woman, with her long hair freely floating, has faces of men running down the side of her green robe and a queue of them eyeing her suspiciously. 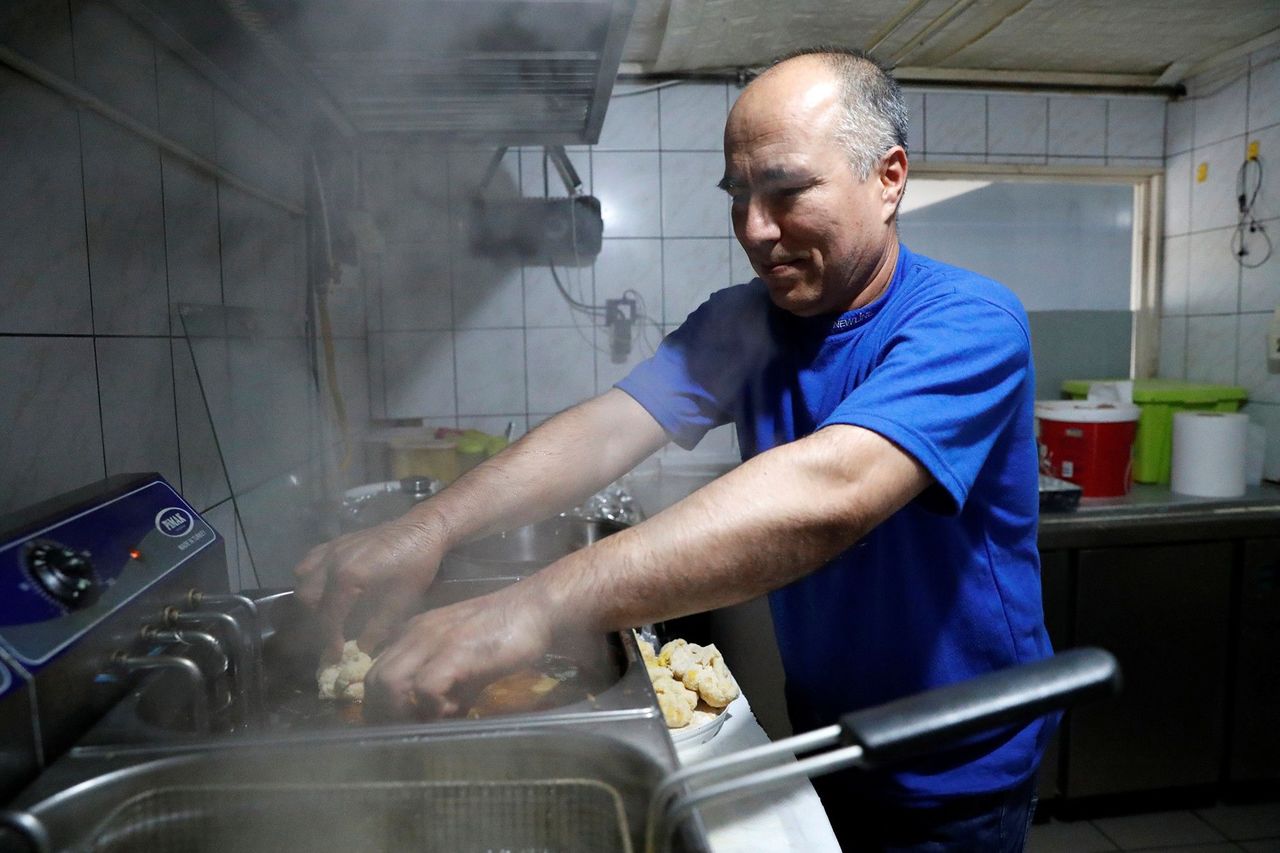 “In a country where men rule over women, women are deprived of their right to speak freely,” he says.

Under the Taliban, who took power in August, he expects women will slowly “disappear” behind the walls of their homes, as they were forced to do when the Taliban last ruled 20 years ago and banned them from work and school.

While the Taliban have promised to allow women more freedoms this time, they have so far reopened schools and most workplaces only to men and boys.

Sharifi is from the mainly Shi’ite Muslim Hazara community, which was repressed under the severe Sunni rule of the Taliban. He arrived in Hungary with the massive wave of hundreds of thousands of migrants that entered Europe in 2015. 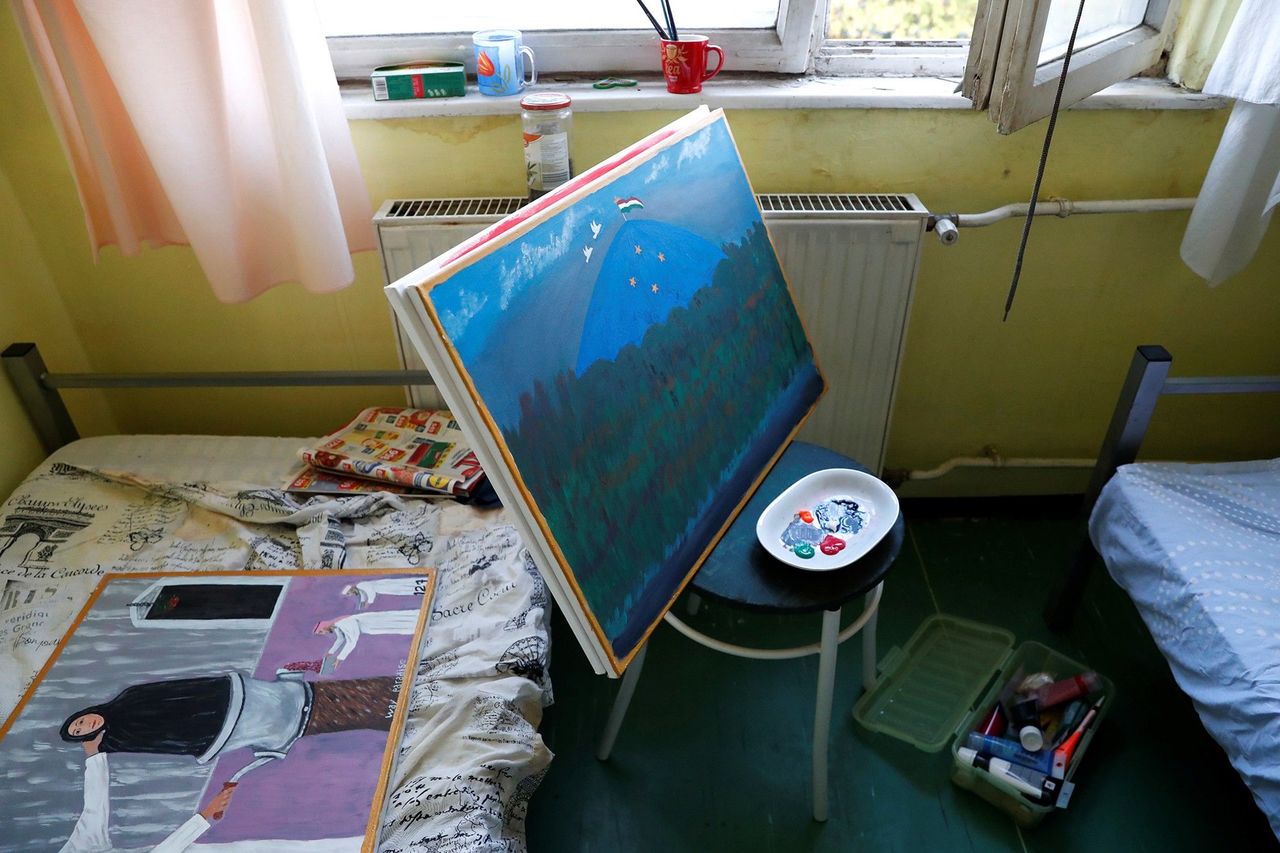 Sharifi’s painting are seen in his room in a homeless shelter in Budapest, Hungary, September 27, 2021.

His paintings are now exhibited at a hall in Budapest along with artwork of three other refugees.

Refugees often deal with traumas through artwork, and seeing their paintings could have a “therapeutic” influence on the public, too, said Marta Pardavi, Co-chair of the Helsinki Committee, an NGO that helped organize the exhibition.

“Because this artwork can convey the traumas, and can make them far more understandable,” she said.