Former Malaysian Prime Minister Mahathir Mohamad has lost his parliamentary seat in Saturday’s general elections, a defeat likely to end the career of one of Asia’s most enduring politicians.

Mahathir came in fourth in a five-way fight in Langkawi, a resort island in Malaysia’s northwest, which he had won with a large majority in the previous poll in 2018. Adding insult to injury, he also lost his deposit.

“It’s a major surprise that not only has he [Mahathir] lost, but he has lost in a spectacular fashion,” said Al Jazeera’s Florence Looi, reporting from outside Kuala Lumpur.

“He has not only lost his seat but has lost his deposit because he has not been able to get more than an eighth of the votes cast. His party has also not managed to win a single seat.”

It was the 97-year-old’s first electoral defeat in more than half a century. He was Malaysia’s prime minister for 22 years from 1981 until he announced his shock retirement in 2003.

He returned to active politics as the multibillion-dollar scandal at state fund 1MDB unfolded, and joining forces with his former deputy turned rival Anwar Ibrahim to defeat the then ruling Barisan Nasional (BN) coalition – a grouping they had both once been part of – to become prime minister against in 2018, just two months shy of his 93rd birthday. 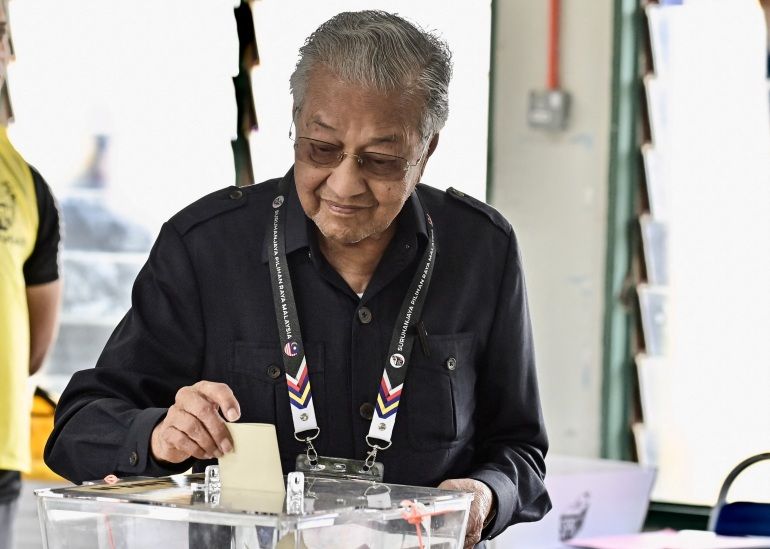 Mahathir contested the election under his own Homeland Fighters’ Party.

Visibly slowed by age but still looking healthy, Mahathir ran this time around under the banner of his own Pejuang party, and had laughed off suggestions he should retire, telling reporters before the election that he had a “good chance” of winning.

“I’m still standing around and talking to you, I think, making reasonable answers,” Mahathir said.

He added his party would not form any alliances with parties led by “crooks or jailbirds” – an apparent reference to the United Malays National Organisation (UMNO), the party of jailed former Prime Minister Najib Razak that Mahathir himself once headed.

Mahathir was often criticised for his hardline rule when he led the Southeast Asian nation from 1981 to 2003, but he was also hailed for helping transform the country into one of the world’s top exporters of high-tech goods.

His long leadership provided political stability, and he gained the title of “Father of Modern Malaysia” as he oversaw the construction of key projects such as the Kuala Lumpur International Airport, and North South highway and opened the country to foreign investment.

Mahathir had warned that Najib would be freed if his allies won Saturday’s election.

He also offered to become prime minister a third time. Observers said there was no chance of that happening and Pejuang did not win any seats it contested.

His titanic clashes with opposition leader Anwar, the man he sacked as his deputy in 1998 and accused of sodomy, have dominated and shaped Malaysian politics since the 1990s.

But in the end, it was age that proved his biggest opponent.

“Mahathir’s time has passed,” Bridget Welsh of the University of Nottingham Malaysia told the AFP news agency ahead of the election.