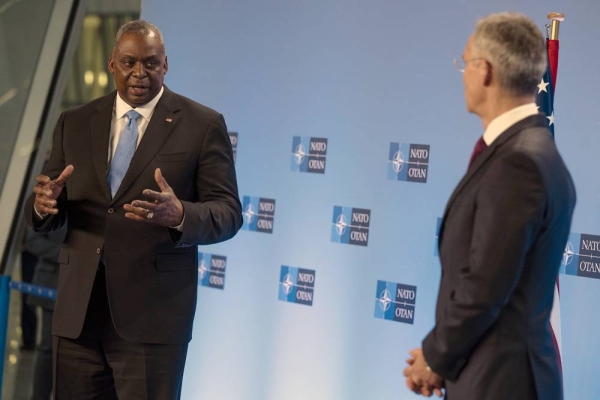 'Everyone believes Ukraine can win the war,' says Austin at NATO-EU talks

The US Defense Secretary Lloyd Austin kicked off NATO-EU talks on Tuesday, saying that Ukraine can win against Russia in the two-month-long conflict.

"Your resistance has brought inspiration to the free world," Austin said, as representatives from more than 40 countries meet in Germany to discuss the Ukraine conflict for the first time.

"Ukraine clearly believes that it can win, and so does everyone here," he added, condemning Russia's invasion as "indefensible."

The US-hosted gathering at Germany’s Ramstein airbase is expected to focus on arming Kiev, as Russia continues its onslaught in eastern Ukraine.

Mark Milley, chairman of the US Army's Joint Chiefs of Staff, told reporters the goal of the talks was to synchronize and coordinate security assistance to Kiev, including heavy weaponry, like howitzer artillery, alongside armed drones and ammunition, according to Reuters.

"The next several weeks will be very, very critical," he said. "They need continued support in order to be successful on the battlefield. "That’s really the purpose of this conference.”

Earlier this morning, Ukrainian MP Lesia Vasylenko made it clear what she hoped the result of today's meeting between nations and defense chiefs would be.

Speaking at Ramstein Air Base, Germany's defense minister announced it would deliver Guepard anti-aircraft systems to Ukraine, amid mounting pressure from inside the government to provide Ukraine with more heavy weaponry.

Russian Foreign Minister Sergei Lavrov said on Monday that by supplying Kiev with weapons NATO was "in essence" engaging in a proxy war with Russia, in an interview broadcast on state television.

He added that Western supplies of sophisticated weapons were prolonging the conflict, rather than bringing it to an end, and warned NATO not to underestimate the elevated risks of a nuclear conflict over Ukraine.

Guterres has faced criticism from Ukraine for going to Moscow before Kiev, and for failing to intervene decisively after Russia invaded on Feb. 24. He has also been meeting Lavrov, before traveling to Ukraine.

“It is simply wrong to go first to Russia and then to Ukraine,” Ukrainian President Volodymr Zelenskyy told reporters in Kiev on Saturday. “There is no justice and no logic in this order. "The war is in Ukraine, there are no bodies in the streets of Moscow," he added.

Austin's comments follow a trip he and US Secretary of State Antony Blinken made to Kiev on Sunday, in which the US pledged additional support to Ukraine's war effort, including $300 million in foreign military financing and a $165 million (€154 million) sale of ammunition.

"They can win if they have the right equipment, the right support," Austin said after their visit to Ukraine.

Numerous countries around the world, including the UK, the US and France, have recently pledged to give Ukraine advanced offensive weaponry, as the Russian army attempts to capture territory in eastern Ukraine.