Heavily-indebted Chinese property giant Evergrande says it will receive $818m after cancelling a contract to buy land rights for a new football stadium.

Construction of the stadium started more than two years ago but has been hit by issues for months.

The stadium was for Guangzhou FC, a top tier team that Evergrande bought a controlling stake of in 2010.

The money from the deal will be used to settle debts related to the project, the company added.

The announcement comes as Evergrande tries to raise cash to make debt payments.

Once China's top-selling property developer, the firm has been struggling since last year under the weight of more than $300bn of debts, of which around $20bn is held by investors from outside the country.

Under this deal, the land, buildings and other items associated with the stadium will be transferred to the Guangzhou Municipal Planning and Natural Resources Bureau, the company said in a statement to the Hong Kong Stock Exchange.

In September 2021, it said building work on the Guangzhou Evergrande Football Stadium would continue despite its debt crisis. But a government body took control of the stadium last year and planned to sell it, Reuters news agency reported in November.

At the time, Reuters reported that Evergrande was also considering selling Guangzhou FC. But Evergrande's latest statement did not mention the club.

In April 2020, the company paid $1bn to use the land and construction on the project got under way the same year.

With an infusion of new money, the squad was strengthened and it immediately won promotion to the top tier of Chinese football. From 2011 it won the Chinese Super League title eight times, including seven seasons in a row.

However, this season the club is currently close to the bottom of the league.

At the start of last year, the club said it would revert to its original name - Guangzhou FC.

Guangzhou is the capital and biggest city of Guangdong province in southern China. 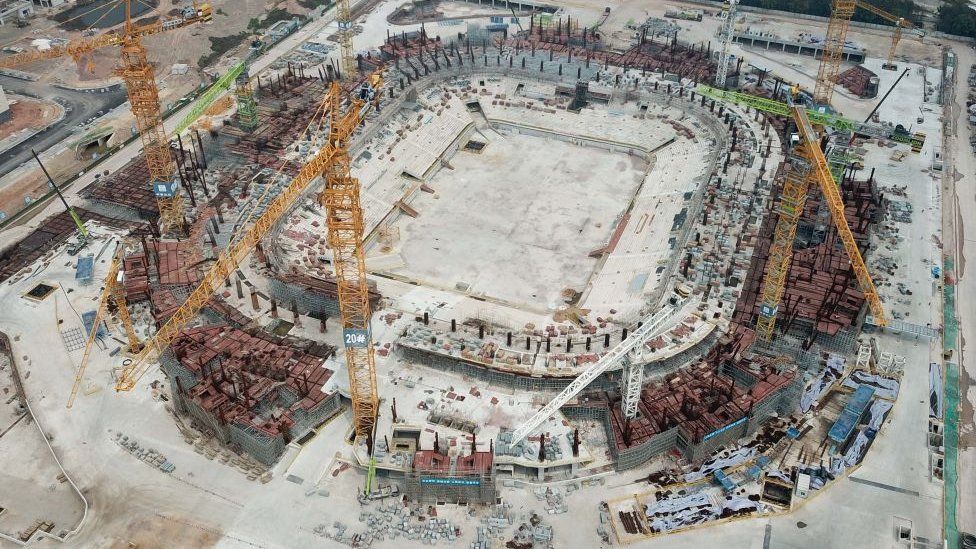 On Sunday, Evergrande said that one of its subsidiaries had been ordered to pay out $1.1bn for failing to honour its debt obligations.

Evergrande Group (Nanchang) Co. Ltd must make the payment to a guarantor of its liabilities, the firm said.

It came just two days after it made a long-awaited announcement about how it aims to restructure its foreign debts.

The company said it will offer its offshore creditors asset packages that may include shares in it overseas units - including an electric vehicles business and property services provider - as a sweetener.

However, the proposal was seen by some commentators as not providing enough details on how the firm aimed to restructure its huge liabilities.

Last month, the firm said two of its top executives had resigned, after an internal probe found that they misused around $2bn in loans.

Evergrande said it found that chief executive Xia Haijun and chief financial officer Pan Darong were involved in diverting the loans secured by its property services unit to the wider group.

What China's Evergrande crisis means for the world