As Europe's space leaders meet virtually in Brussels at the new European Space Forum, Euronews explores how the sector is making a big push to become more business-minded.

“Supporting startups is a huge priority” for the European Space Agency (ESA), according to its Director General Josef Aschbacher, as the agency seeks to compete in an increasingly crowded and dynamic sector where Europe has been accused of lagging behind.

The goal is to make Europe fertile ground for what is termed 'New Space' operators, a catch-all phrase for companies taking advantage of existing and emerging space technologies to build wholly commercial businesses.

For Aschbacher, there is no time to lose, as he sees the commercial space sector in the United States taking the lead in launch services, but also areas which are traditionally strong for Europe, such as Earth observation.

He says a priority for his tenure is to “encourage people to take more risks, be faster in implementing projects, and to help them both through faster action on the side of ESA”.

Although the move is welcomed by the space sector, Olivier Lemaitre, Secretary General of industry body ASD-Eurospace, warns that we're not going to see a 'European SpaceX' anytime soon.

Space budgets in Europe are fragmented across countries and six times smaller than in the US, he tells Euronews. "Some public powers forget this reality, thinking we can do as well as the USA with six times less money," he says.

The pro-business messages from ESA come as the European Commission's own space operation, called the European Union Agency for the Space Programme, begins to spread its wings.

The recently-created EUSPA is tasked with maximising the benefits of the European Commission-funded space projects such as the Galileo navigation system, the Copernicus earth observation network, and the EGNOS positioning and navigation tool.

These two organisations, ESA, and EUSPA, both say they are focused on encouraging a 'globally competitive' European space sector. Which begs the question - do we actually really need both of them in parallel?

"It's a good question," replies Aschbacher, "But today they are working certainly in a very complex and complementary manner". He stresses that the role of ESA is to develop the technical side of new satellite technologies and launchers, while the European Commission has the political clout to get big projects like Galileo off the ground.

What remains an open question however, is whether Europe, with ESA and EUSPA, can create the kind of innovative and flexible environment that can foster the emergence of major new commercial players.

What's the future for Coperncius?

Another key topic of debate at the European Space Forum will be the future of Copernicus. Established in 2014, 'Copernicus provides Europe with a continuous, independent and reliable access to satellite Earth Observation data and information.

Simonetta Cheli, soon to become director of Earth Observation at ESA, sings the praises of this constellation of satellites, telling Euronews: "We have eight satellites working flawlessly, we have 400,000 users registered and 250 terabytes of data are downloaded every day."

However she admits that the programme is facing funding difficulties as a result of “high level political considerations” related to Brexit (the UK is an active ESA member, but no longer in the EU), with a €750 million shortfall in funding that she is confident will be overcome soon. Lemaitre from ASD-Eurospace also believes that the financing issue can be overcome. "We need to see goodwill on both sides and if we give each other enough time then it could move forwards," he says. 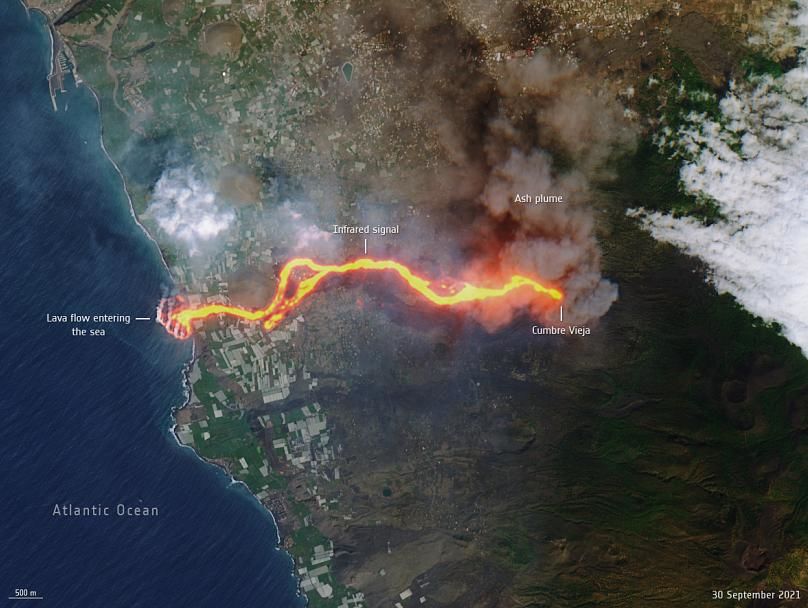 Looking ahead, Cheli explains that the Copernicus programme will be focused on issues such as Arctic monitoring and CO2 emissions observations, both crucial in a post-COP26 political environment.

However private companies are competing with Copernicus in high-resolution Earth imaging, and Cheli says that current thinking inside ESA suggests that finding ways to integrate these commercial initiatives into the Copernicus systems in a mutually-beneficial way is one of the favoured ways forward.

Lemaitre again flags a tendency to over-spin the business potential of Copernicus, which he says was initially designed to offer high quality data to public bodies and scientific institutions.

He believes there is strong economic potential in the Earth observation field, but that barriers exist to access the data and there is a need for powerful AI and high performance computing technologies to take best advantage of the information gathered by the Copernicus Sentinel satellite fleet.