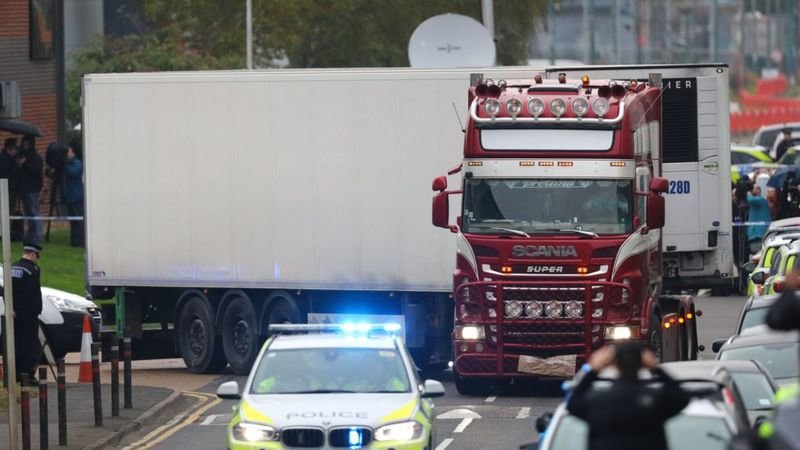 The men, women and children were found dead in a container on an industrial estate in Essex in October 2019.

A court was told one of the first on scene, PC Jack Emerson, checked for signs of life and recalled the bodies were "closely packed" together.

Four men are on trial at the Old Bailey in connection with the find.

The court has previously been shown CCTV of lorry driver Maurice Robinson collecting the trailer, which had been transported from Zeebrugge in Belgium, and driving out of Purfleet port.

Robinson, 26, of Craigavon, County Armagh, called 999 and described finding "loads" of migrants and has already pleaded guilty to manslaughter.

In a statement read to court, PC Emerson said that when police arrived at 01:50 Robinson was "just standing there" and appeared calm.

PC Emerson said: "I could see one of the trailer doors was already open and I could visibly see numerous half-naked bodies in the back of the trailer, lying on the trailer floor motionless.

"I approached the door of the trailer to further inspect the bodies and it became apparent as I got closer that the entire trailer was full of bodies, and the individuals appeared to be half-naked.

"Most of them were wearing clothes on their lower half but they all appeared to not be wearing any clothing on their upper half."

He said there was "a strange smell coming from the trailer that smelt like chemicals" and "smoke condensation... which suggested to me that the trailer was refrigerated".

PC Emerson said he got inside the trailer to search for any signs of life "but there was not".

He said the bodies were "closely packed" together, mainly lying on their backs.

"Due to how packed together the bodies were in the trailer it was not possible to check every body so I made an attempt to check the bodies I could reach." 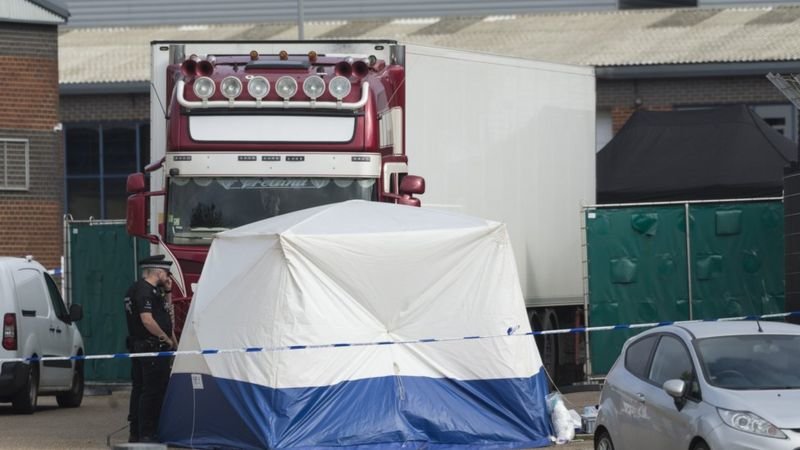 Gheorghe Nica, 43, of Basildon, Essex, and lorry driver Eamonn Harrison, 23, deny the manslaughter of 39 Vietnamese people, aged between 15 and 44.

Mr Harrison, of Mayobridge, County Down, Christopher Kennedy, 24, of County Armagh, and Valentin Calota, 37, of Birmingham, deny being part of a people-smuggling conspiracy, which Mr Nica has admitted.