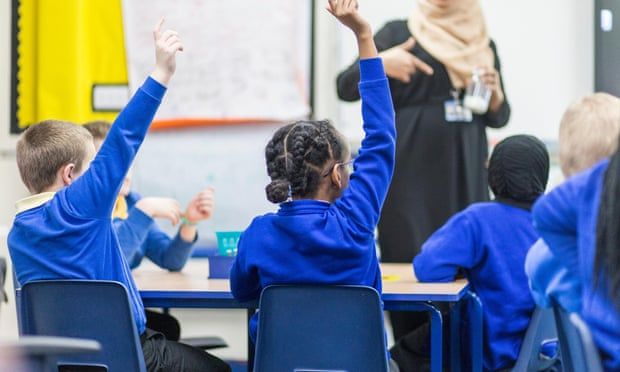 Schools are defending decisions to allow pupils to come in late on Monday morning so they can stay up to watch England play in the Euro 2020 final.

In a message shared on Facebook, Rossmere primary in Hartlepool informed parents that school would still start at 8.40am on Monday but children arriving up to 10.30am would not be marked as late and would not miss any lessons.

This was to enable children who are football fans and would probably be staying up past 11pm on Sunday to watch England play Italy in the Euro 2020 final, to remain in bed a bit longer and get to school slightly later. “We would rather have children rested and in school ready to learn rather than absent all day or grumpy!” the post reads.

When the post, which has received more than 15,000 likes and 3,000 responses, attracted some unexpectedly “negative comments”, it was edited to defend the decision. “We are not encouraging children to stay off school – quite the opposite,” it reads.

“With a number of parents being allowed time off work on the Monday, we didn’t want to see children taking the whole day off because they were tired. Allowing some to come in later means that they will be ready for learning when they arrive. Swapping the timetable round means they won’t miss learning.”

The sentiments were echoed in an email sent to parents from the headteacher at Cornholme junior, infant and nursery school in Todmorden, West Yorkshire. The gesture has been welcomed on social media, with many expressing how happy their kids will be to be able to watch the historic match.

One mother pointed out this was also an opportunity for the children to learn that the England women’s team reached the finals of the UEFA Women’s Championship in 1984 and 2009.

The Euros final, which kicks off at Wembley at 8pm on Sunday, will mark the first time England have reached a major men’s tournament final since 1966. It is expected to be one of the country’s most-watched TV events ever, after the team’s semi-final contest against Denmark drew a peak audience of 25.71 million.

Boris Johnson has urged employers to be flexible if possible and consider giving workers time off on Monday if England win the championship. Meanwhile, a petition for an emergency bank holiday has gathered more than 300,000 signatures.

Rossmere primary said that given the damage to education and life experiences during the past 16 months of the pandemic, the Euros final was a teaching opportunity that pupils should not have to miss out on.

“The job of schools is to give children the best experiences possible, which will help in their education. This is an event of national pride and is such an important teaching point that we want children to be part of that,” the post reads.

“It’s 55 years since England reached a major [men’s] football final so let them watch, talk about the importance of the national anthem, talk about pride and resilience and possibly disappointment. This is a learning opportunity.”
#boris johnson  #facebook
Add Comment