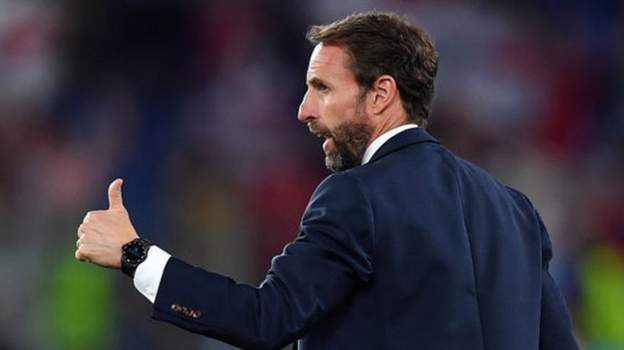 England are not settling for a semi-final spot at Euro 2020 after they reached the last four by thrashing Ukraine, says Gareth Southgate.

The 4-0 win in Rome means England have matched their run to the 2018 World Cup semi-finals in Russia and their showing in the Nations League in 2019.

"It's fabulous," Southgate told BBC Sport. "I suppose it's still sinking in that it's another semi-final - three in three years.

England will face Denmark in their semi-final at Wembley next Wednesday. The winners will play Spain or Italy, who meet in Tuesday's semi-final, also being played at Wembley.

The stunning display in Rome gives England their third semi-final at a European Championship, after 1968 and 1996, with the latter also on home soil.

It was also their biggest European Championship finals win, and their largest in the knockout stages of a major tournament, and comes after the significant victory over Germany in the last 16.

"It's fabulous for our country - a semi-final at Wembley," continued Southgate. "Everyone can really look forward to that - it's brilliant.

"I know what will be happening at home. It's lovely to see everyone on a Saturday night, beer in hand. They should enjoy it. It's been a long year for everyone.

"I'm chuffed the two performances [against Germany and Ukraine] have brought so much happiness to people."

'We need to look after players'

England set the tone for Saturday's stellar display with the opener from Harry Kane after just four minutes. They made an even quicker start to the second half as Harry Maguire headed in with just a minute gone.

Having made changes to his side throughout the tournament, the latest of which saw Jadon Sancho brought in for his first start, Southgate was also able to bring players off to rest and to protect them from bookings that could have led to suspension for the semi-final.

"The players have been fantastic," added Southgate. "To play as well as they did in a game with so much resting on it was impressive.

"We've known we had players we needed to look after physically. We know across seven games, the squad is so important, trying to give people a breather at the right time.

"We learned a lot from Russia in that instance. We were trying to balance players with knocks and yellow cards."

'It's where we wanted to be'

Captain Kane's two goals came after he broke his tournament duck with his strike against Germany in the last 16, and he was thrilled with the team's display.

"What a great performance in a big game," he told BBC Sport.

"We were favourites. There was a lot of pressure and a lot of expectations. The performance was top-drawer. Another clean sheet, four goals - it was a perfect night for us.

"It's where we wanted to be. We set out a vision before the World Cup of what we want to achieve. We are knocking it off step by step. The World Cup was great but we fell short. We had a good run in the Nations League. We're in another semi-final.

"Now it's about getting over the line - the next step that we have got to do on Wednesday.

"We have more experience [than 2018]. We've been playing for our clubs in big games - Champions League finals, Premier League title races. We're looking confident. Hopefully we can continue that.

"The job is not done yet. There's a lot more football to play."

Prior to his goal against Germany, he had gone four matches without scoring for his country, during which he struggled to make an impact.

"It's always nice to score early in a game. It's a great feeling to help the team," he added.

"There was a lot of talk about me and my performances. But I'm just ready for the next game and trying to lead this team to the European final."

'This group is not settling for a semi-final' 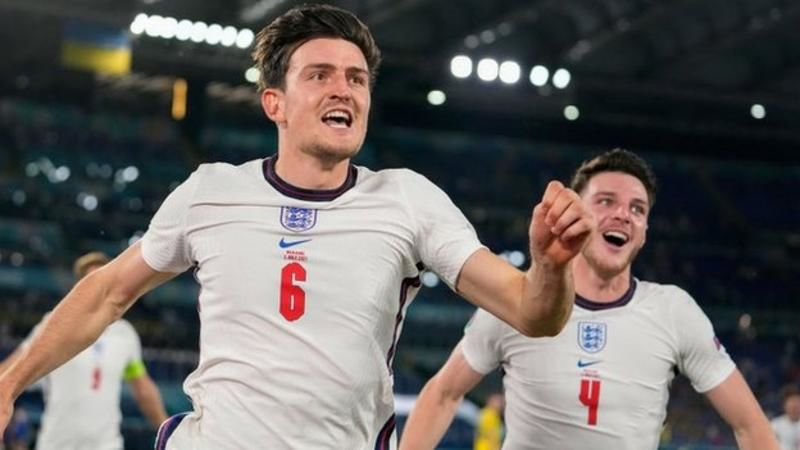 Saturday's result also represents another clean sheet for England - their fifth in a row in this tournament.

They have now kept seven consecutive clean sheets for the first time in their history, with the Three Lions run without conceding currently standing at 662 minutes.

Defender Maguire, who contributed to England's solidity at one end and in a goalscoring capacity at the other, told BBC Sport: "We have great belief in the dressing room.

"It is hard to soak it up when you have another big game coming and you know who you are playing and when.

"The dressing room will be a great atmosphere tonight and then we will wake up tomorrow and be focused again. This group are not settling for a semi-final, we want to go further."

The sentiment was echoed by Henderson, the scorer of the fourth goal.

"We can't dwell too long," he said. "We've got a big game on Wednesday and we need to give absolutely everything.

"We have always felt we are continuing to grow as a team and we feel we are ready to take the next step.

"Denmark are a tough side so we need to be at our very best if we want to go to the final but hopefully we can do that."

In reference to his headed goal - his first in 62 international caps - he added: "It's about time [for me to score]. It's been a long time coming. Thankfully I managed to get on the scoresheet.

"I'm just delighted for the lads because the performance was fantastic."

'This is a special moment for me'

Borussia Dortmund winger Sancho has featured for just six minutes in the tournament prior to Saturday's game, but impressed in his first start with his skill and drive.

The 21-year-old, who is set to join Manchester United after they agreed a fee of £73m with Dortmund, told BBC Radio 5 Live: "I'm feeling over the moon. Today was must-win and I'm just happy to have got an opportunity to play. This is a special moment for me.

"Every time I haven't been playing I've been going back to training and been giving it everything.

"I've just been focusing on myself while I've been at England. I've always been ready if I needed to come on.

"We knew today was going to be a big game, Ukraine are a very good side. I'm delighted."