Substitute Chloe Kelly poked home a loose ball from a corner to send the raucous record crowd of 87,192 into a frenzy with ten minutes of extra time remaining.

She waited for confirmation of the goal before taking off her shirt and waving it around her head, while being lifted by her team-mates in a moment of pure elation.

On a monumental day in English football history, Sarina Wiegman's side showed they were equal to anything a strong and physical Germany team threw at them.

Ella Toone had earlier come off the bench to score the opener in normal time before Germany's Lina Magull set up a nervous ending when she equalised in the 79th minute.

There were scenes of jubilation in the stands and an outpouring of emotion by players on the pitch at full-time as the magnitude of their achievement sank in.

The final was advertised as a battle between the competition's two best-performing sides, and for large parts they cancelled each other out - but the biggest crowd in the history of a men's or women's Euros was given their money's worth.

Striker Ellen White missed a few chances in the first half, Lucy Bronze was denied with a header, Germany's Magull struck wide and England defender Leah Williamson had to scramble a corner off the line before Toone was introduced to break the deadlock.

She had given England fans the winning taste before Magull stunned the home crowd, though it would only delay the celebrations that Kelly, who only returned to football in April after suffering an anterior cruciate ligament (ACL) injury, gave them.

England did what no other nation had done before - beat serial winners Germany in a European Women's Championship final, and the feeling was sweet.

It comes 56 years after England's men beat West Germany in the 1966 World Cup final, the only previous major trophy won by a men's or women's England senior team.

The players fell to the ground at full-time in tears of joy, in scenes which will be remembered and replayed for years to come on one of the greatest nights in English sport.

It was a final like no other in every sense - the build-up was on a scale above anything seen in women's football in Great Britain, and it provided the perfect ending.

Male fans were sporting England shirts with their female icons' names on the back on the London Underground on the way to the match, while fan parks around the country were filled with supporters watching the final on big screens.

Wembley Way was already packed on Sunday morning and there were boos when Germany were announced on the stadium tannoy before kick-off.

And it looked like things were going England's way when Germany's lethal striker Alexandra Popp, joint-top scorer in the tournament going into the final, picked up an injury and dropped out of the starting XI just before kick-off.

The feistiness off the pitch translated on to it too - referee Kateryna Monzul awarded two early yellow cards for innocuous fouls by England, and the crowd were frustrated for much of the first half when decisions didn't go their way.

The physical battle between the sides continued and the game swung back and forth. Germany had momentum going into extra time after Magull had hit the post before equalising.

But as this England team have shown throughout the tournament, they would not be beaten easily.

They continued to threaten and Kelly ran over to the fans to galvanise them when taking a corner, moments before she delivered the winner England fans across the country have dreamed of for 56 years.

The familiar sound of England fans singing 'Sweet Caroline' while serenading the players at full-time was even sweeter this time around.

The Three Lions lyrics have finally come true as football came home at the national stadium in front of the largest crowd in England women's history.

Captain Williamson was sobbing at full-time, while vice-captain Millie Bright wiped tears from her face in an embrace with best friend Rachel Daly.

Wiegman, who has now become the first manager in history to win back-to-back Euros with two different nations after also guiding the Netherlands to glory in 2017, also removed her mask of calmness as she ran on to the pitch with her arms in the air and a look of disbelief. 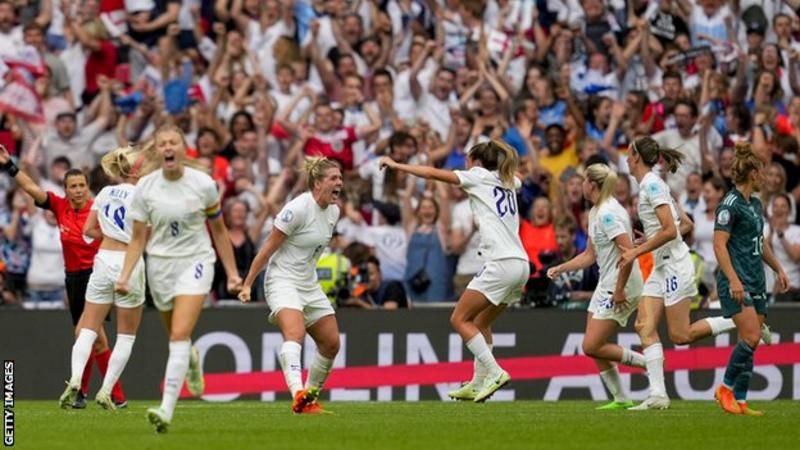 England lost in the 2009 Euros final to Germany

Midfielder Jill Scott, who had suffered defeat at the hands of the Germans in the final in 2009, came on in extra time to help England get over the line and was overcome with emotion.

Young Manchester United star Toone, who has come off the bench to contribute three goals in this tournament, took centre stage when she opened the scoring - but the biggest moment was Kelly's.

After being forced to sit out the Olympic Games and miss 11 months of football, she fought her way into selection for the Euros and has delivered the goal which will never be forgotten.

Victory in the final was capped by England forward Beth Mead picking up the Golden Boot as the tournament's top scorer with six goals and five assists.

England lifted the trophy to a standing ovation and defender Bronze then slid across the pitch, covered in confetti, before the players embarked on a victory lap draped in flags of Saint George.