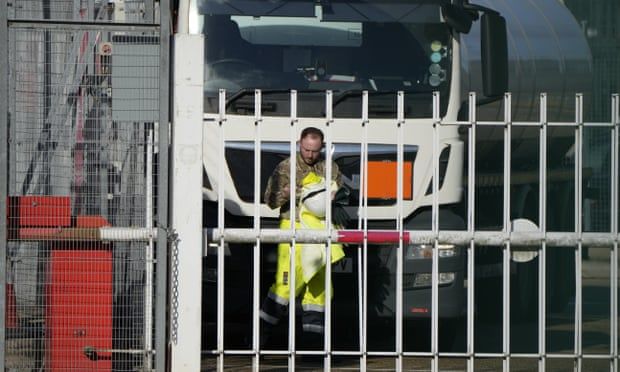 Industry leaders have warned the government that factories across the country could stop production due to rising energy costs.

Andrew Large, director-general at the Confederation of Paper Industries, Gareth Stace, from UK Steel, and other representatives of energy-intensive industries attended a meeting with the business secretary, Kwasi Kwarteng, to discuss the wholesale gas crisis on Friday afternoon.

“When we talked with the secretary of state this afternoon, it was very, very clear across all of the sectors that there are serious risks of effectively factory stoppages as a result of the costs of gas being too high to bear, and in those circumstances there will be a gradual knock-on effect through supply chains, right the way across manufacturing, consumer retail and other products.”

When asked what this would mean for the paper industry, Large said it would be damaging for profitability.

Speaking to Channel 4 News, Stace argued the government had failed to act to alleviate the crisis, unlike other governments in Europe.

He said: “What we’re asking Kwasi Kwarteng today to do on wholesale prices is just to step in, to alleviate that pressure in the short term, just like in say Portugal or Italy. Their governments are already investing many billions of euros, to help their industries and the UK government has yet done nothing.”

Asked what the worst-case scenario could be, Stace said steel plants could close for good.

“The nightmare scenario would be that we produce less steel in the UK, that we see all of that steel that we do consume in the UK – and that’s increasing – be met by imports, and once you take away a steel plant you don’t really bring them back,” he said. “That’s it for good. Once it’s done, it’s done.”

The Energy Intensive Users Group (EIUG) said it had welcomed the opportunity to meet the business secretary and is pleased he wants to find practical solutions to the challenges members face going into this winter.

EIUG chair Dr Richard Leese said: “Our message to the secretary of state was for prompt and preventive measures to help avoid recent production curtailments in the fertiliser and steel sectors being replicated in other areas this winter.

“EIUG will work with government to avoid threats both to the production of essential domestic and industrial products, as well as an enormous range of supply chains critical to our economy and levelling up the country.”

The EIUG’s membership comprises trade associations and customer groups representing industrial sectors with the heaviest energy consumption in the UK.

In a statement, the Department for Business, Energy and Industrial Strategy said about the meeting: “The business secretary stressed that the government remained confident in the security of gas supply this winter. He also highlighted the £2bn package of support that has been made available to industry since 2013 to help reduce electricity costs.”

The shadow business secretary, Ed Miliband, said: “This is a crisis made in Downing Street.

“Kwasi Kwarteng is scrambling to meet industry bosses but he is all talk. This chaotic Tory government got us into this mess in the first place and has no plan to address it.”

Analysts have predicted Britons could see their energy bills rise by 30% next year.

Research agency Cornwall Insight has claimed further volatile gas prices and the potential collapse of even more suppliers could push the energy price cap to about £1,660 in summer.
Add Comment