A closely watched forecast suggests that while the taxpayer may be off the hook for energy support to households from the summer, bills will still be very high by historical standards.

A fall in wholesale energy costs means average annual bills could soon come in below the level of the government's energy support programme, according to a leading forecaster.

Average annual bills under the regulator Ofgem's price cap mechanism are expected to drop to around £2,800 a year from July, Cornwall Insight predicted.

This would mean the government's energy price guarantee (EPG), which limits how much a typical household pays for its wholesale energy, would no longer cost the taxpayer anything - potentially saving billions. 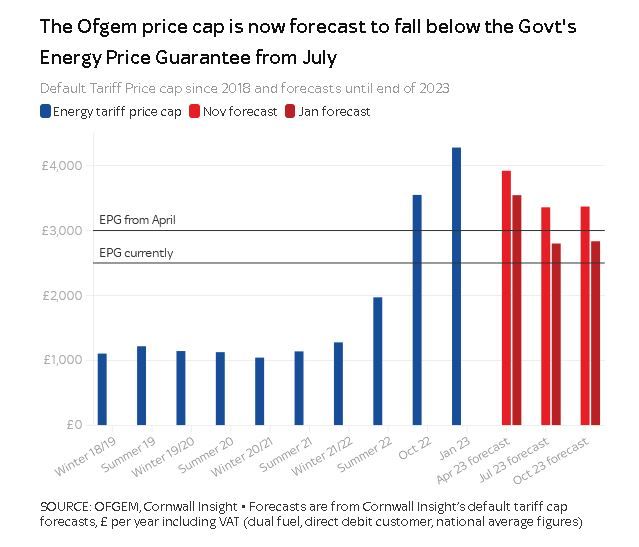 At the moment, if wholesale costs are above a certain level for electricity and gas, the government pays the excess.

This means an average bill of £2,500 for British households, a figure that will rise to £3,000 from April as the EPG's level of support is eased back.

Cornwall Insight predicted average annual bills of £3,545.31 between April and June - dropping sharply during the summer months from July to the £2,800 estimate.

The EPG scheme, introduced by Liz Truss's short-lived government on 1 October, protects families from rises in energy costs by limiting the amount energy companies can charge per unit of energy used.

Behind the fall in prices is a drop in the price of wholesale gas, which dictates the overall cost of energy. Prices spiked throughout last year after Russia's invasion of Ukraine.

Consumers have been warned that bills will remain higher than in 2019, before the pandemic began.

Prices have already fallen from the high in August but it will take time for the effects of price decreases to work their way to customers. Full effects will not be seen until the third quarter of the year, from July to September, as energy suppliers buy energy ahead of time and falling day to day prices have a limited impact in the short-term.

Even if the current, comparatively low levels of wholesale prices are maintained, pressure on government to provide monetary support for bills will still remain as prices stay high. The estimated £2,800 a year cost is more than double the cost of 2021.

"While it is positive to see a drop in the price cap forecast, household bills are set to remain high," said Dr Craig Lowrey, principal consultant at Cornwall Insight said.

"With the Energy Price Guarantee rising in April, the second half of the year will still see a typical household facing bills that are well above historic levels and facing costs that many can ill afford."

Energy bill supports will need to be reviewed, he added. "It is clear that blanket measures of bill support are not providing adequate protection for the most vulnerable and more targeted measures including social tariffs may be something for the government to consider."

"While the details of future support are best left up to the judgement of politicians, the forecasts demonstrate we must look beyond the current policy if we are to see a fairer, more cost-efficient and enduring way of reducing household energy bills for those who need it the most."