George VI is usually credited with first referring to the monarchy as “the firm” after abruptly inheriting a position he had neither anticipated nor sought, and having perhaps come to realise that, for all its pomp, the institution had much in common with an unwieldy family corporation. Certainly by the mid-20th century, when his daughter Elizabeth assumed the throne, one could argue that the business of being a monarch was less about ruling than about, well, business.

The modern monarchy Elizabeth inherited required the skills of a canny manager rather than a roistering ruler: financial acumen, deft negotiating skills and an acute nose for PR. And then there were the opinionated, and sometimes downright troublesome, members of the board. Throughout her reign, the greatest challenge Elizabeth faced was managing not the relationship of the monarchy with the state, but the relationships of her children and extended family with their spouses, the press and the public.

The tests for the young Queen would arise in the earliest moments of her reign. Though the charmed Victorian confection of the royal family had soured somewhat through the abdication crisis, Elizabeth and her younger sister had been portrayed as rosy-cheeked role models during the second world war war. The beautiful young monarch, her naval husband and their adorable young family would be cherished by the nation during the optimistic postwar years. 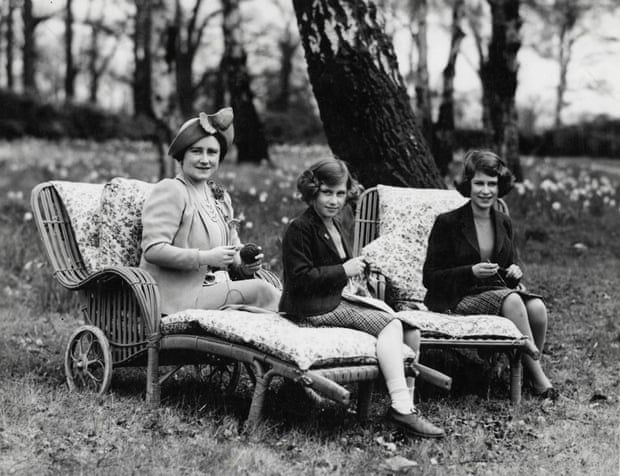 Queen Elizabeth with her two daughters, Princess Elizabeth and Princess Margaret, take part in knitting to help with war charities during the second world war.

But even on the day of her coronation, flies were settling in the ointment. It was in the moments before the service at Westminster Abbey that the first sign of potentially serious trouble for the new sovereign emerged, when Princess Margaret brushed a small piece of fluff from the equerry Peter Townsend’s lapel, a gesture picked up by the TV cameras which revealed to the watching world that the 23-year-old was in love with a divorced man.

Elizabeth was initially sympathetic, and as head of the family had the power to allow the match to happen. But as her biographer the historian Ben Pimlott noted: “The problem over Peter Townsend was the first of importance that required the Queen to exercise her independent judgment. Her handling of it signalled a future pattern. On delicate matters, she would let events unfold, not take sides and, if a decision was unavoidable, make scrupulously certain that any blame for a mistake would be taken by ‘advisers’, if not in Downing Street, then at the palace.”

Townsend was sent to Belgium for two years, and Margaret eventually decided it would be too difficult to attempt to force the marriage through and resolved to give him up. 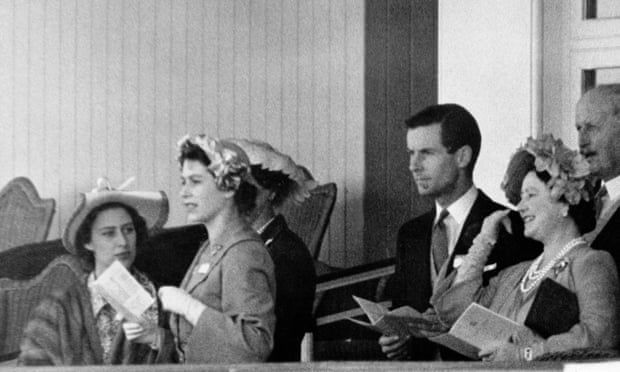 These instincts for stability and preservation of the status quo had been instilled in Elizabeth from a young age. She had been drilled for her role as head of the monarchy, taking weekly lessons as a teenager in constitutional history with the vice-provost of Eton. Care had been taken to avoid the instruction being too “intellectual” – a university education was not considered appropriate. Throughout, the emphasis was on the ancient heritage of the position she would assume, and the steps her forebears had taken throughout history to ensure, above all other considerations, its survival.

According to the historian Frank Prochaska, holding things together was at the very essence of Elizabeth’s role as monarch. “Her whole life [was] given over to public service, and she [saw] her role as providing stability to take the institution through difficult times. Her personality [was] given to promoting stability.” It was one of the great strengths of Elizabeth’s reign, but as her children got older and the society over which she ruled became less deferential, the weaknesses of a detached approach that prioritised the institution over all things – including her sons and daughter – would be painfully exposed.

Charles, a toddler when his mother was thrust into her new role, told his authorised biographer, Jonathan Dimbleby, of being “emotionally estranged” from his parents, denied the affection they were “unable or unwilling” to give. An heir raised to be more at ease with himself might have sidestepped some of the troubles that beset Charles’s later life – and with them the monarchy itself. 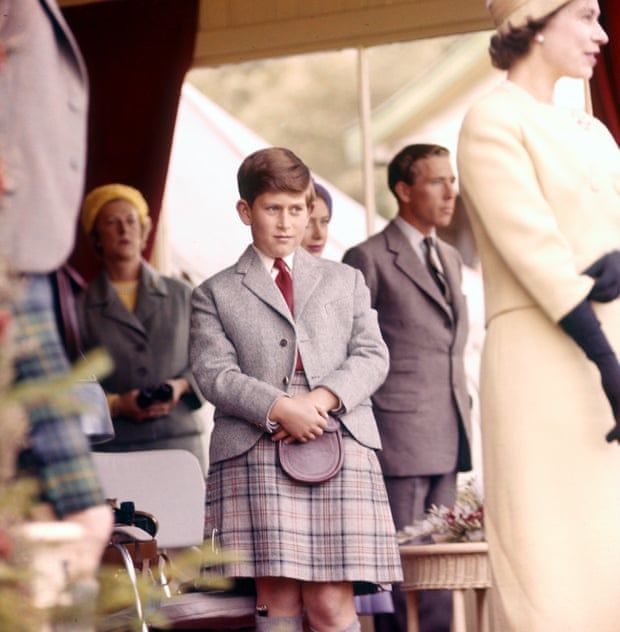 By contrast, perhaps in an attempt to atone with her third and fourth children, born a decade after Charles and Anne, Elizabeth was accused of excessive indulgence towards Prince Andrew, a particular favourite, and Prince Edward.

Finances would prove another challenge, in successive deals struck with the government over payments to the Queen and a list of other family members . 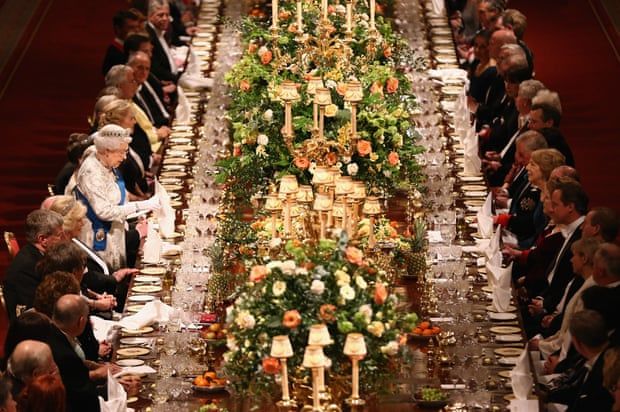 Guests listen to a speech by the Queen during a banquet in honour of the president of Ireland, Michael D Higgins, in Windsor in 2014

Where previous monarchs had been allowed to settle their financial arrangements in secret, the negotiations over the civil list in 1971 were public – and invited sharp criticism. The New Statesman said the Queen had shown “truly regal cheek” in asking for a civil list rise linked to prices while refusing to disclose details of her private wealth. Even among readers of the Sun, four-fifths thought she did not deserve a pay rise.

She secured what was deemed another generous settlement in 1990, though by then questions were growing over the tax-free status of her personal income. Stoked by the very public flareups in the marriages of her children, anti-monarchical sentiment was growing, and even the Times could describe the Queen as “a dotty granny presiding over a loony soap opera”.

By the “annus horribilis” of 1992, it was increasingly apparent that the CEO was struggling to retain control of the company, and in 1993 it was announced that the Queen and Prince Charles would pay tax on their private income. “The Queen is a very pragmatic person,” Michael Peat, her financial director, said at the time. “She appreciates that there is a general feeling that she should pay tax.”

At a time when some genuinely feared the institution of the monarchy could be in peril, that pragmatism is arguably what saved it. In the wake of the events of 1992 – which included the Windsor Castle fire and the very public crumbling of three of her children’s marriages – the Queen agreed to the formation of the Way Ahead Group, a committee of senior royals and courtiers that she chaired, and which met explicitly to discuss the direction of the monarchy.

But it was Elizabeth herself who, conscious of the corrosive effect of Charles and Diana’s public warring, decided that the couple should divorce, writing to them immediately after the princess’s Panorama interview in 1995 to tell them as much. It was a shock to Diana, as was the abrupt stripping of her HRH honorific. The Queen’s preferred mode may have been a hands-off conservatism, but decisive action, unsentimental and cold-eyed, was not beyond Elizabeth when required. 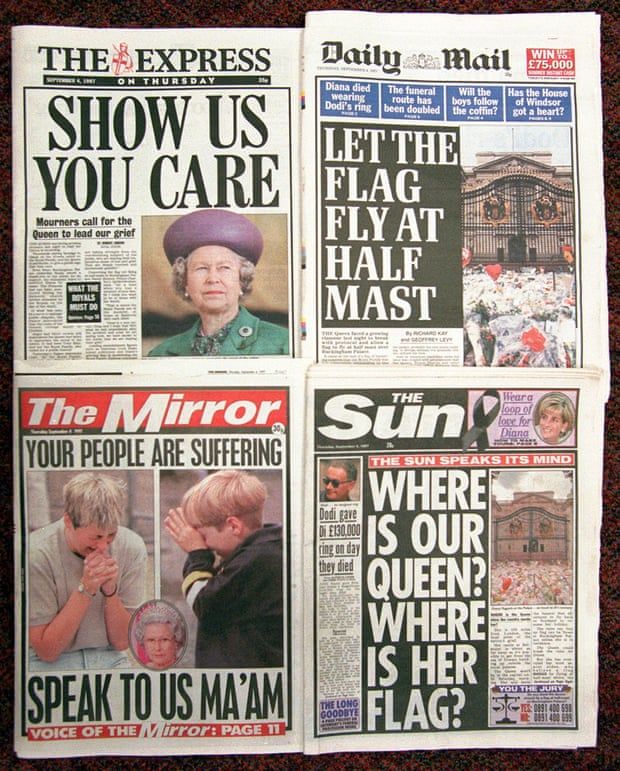 Editions of the Express, the Daily Mail, the Mirror and the Sun in London on 4 September 1997 show headlines regarding Queen Elizabeth II and her reaction to the public’s grief over the death of Princess Diana.

Diana’s death presented the monarchy with its most acute crisis since the abdication, leaving Elizabeth, so often quietly surefooted, flailing when faced with an outpouring of public grief that she clearly did not understand. Having reluctantly agreed to her advisers’ pleas that she show a little emotion in keeping with the febrile times, however, a dangerous crisis was averted.

Hoping, no doubt, that she had seen off the last significant challenge of her management career, the ageing monarch came increasingly to delegate her responsibilities. With the stability brought by the marriage of Charles and Camilla, the committee recommended an increased role for the Prince of Wales. His increased responsibilities became semiformal when he chaired the Commonwealth heads of government meeting in November 2013 in the Queen’s place, the first time she had missed the gathering in her reign. 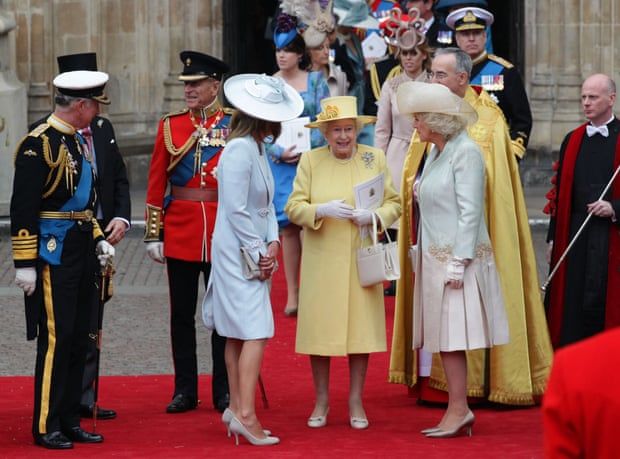 The Queen and Camilla, Duchess of Cornwall, following the marriage of Prince William and Catherine, Duchess of Cambridge, at Westminster Abbey in 2011.

William’s marriage in 2011, too, had done much to rekindle public affection for the monarchy, and he, his wife and brother, Harry, played active roles in the diamond jubilee the following year. At the conclusion of that event’s celebrations, instead of the crowd of cousins and distant viscounts crammed on to the Buckingham Palace balcony, it was a small and highly concentrated group of core members who joined the Queen to greet the crowds on the Mall: Charles and Camilla, William, Catherine and Harry. “A stripped-down royal family”, noted the approving Daily Telegraph, “remodell[ed] for the age of austerity”.

There were crises still to come, however, when the increasing absence of the ageing Queen’s firm hand on the tiller would be painfully exposed. The failure of the royal family to embrace Meghan Markle following her marriage to Harry, and the couple’s departure to the US amid acrimony and accusations of racism, was arguably due in part to an increasing leadership vacuum at the heart of the family. Prince Andrew’s terribly judged response to accusations of sexual offences, too, exposed a flailing firm in need of wise guidance (though Elizabeth’s lifelong indulgence of her second son can’t have helped his behaviour).

None of it, though, could sink Elizabeth’s monarchy. As the royal biographer Penny Junor noted in her book about “the firm”: “Crises have come and gone, crises that would have crippled most individuals, families, even institutions, but they simply keep going, keep on doing what they have always done, nine times out of 10 not even acknowledging whatever has happened, and miraculously the crisis fades.” Elizabeth’s careful, seven decade-long leadership made that stability possible – for as long as she was at the helm, at least.