El Salvador’s President Nayib Bukele has said he plans to seek a second five-year term in office, despite the country’s constitution prohibiting presidents from having consecutive terms.

“I’m announcing to the Salvadoran people that I’ve decided to run as a candidate for president of the republic,” Bukele said late on Thursday in an Independence Day speech livestreamed on public television and social media. Bukele’s current term is set to end in 2024.

“Developed countries have re-election,” he said. “And thanks to the new configuration of the democratic institution of our country, now El Salvador will too.”

The announcement came one year after new justices on the country’s Supreme Court – appointed by lawmakers aligned with Bukele – ruled that presidents can seek a second consecutive term despite the constitutional ban.

Constitutional lawyers have said allowing presidents to seek re-election would violate at least four articles of the constitution, including one that limits presidential terms to five years and states that the person who serves as president will not continue in their functions for one day more.

The top court’s ruling in September of last year drew widespread condemnation and spurred fears of a return to authoritarianism in El Salvador.

The US State Department also slammed the decision as one that “undermines democracy”, warning that a “decline in democratic governance damages” the United States’s relationship with the Central American country.

Bukele has enjoyed high approval ratings since he took office in 2019. According to a poll carried out last month by CID Gallup, 85 percent of people approve of his presidency while 95 percent are happy with his government’s handling of security matters.

But the president has faced growing criticism from human rights groups and foreign governments about his concentration of power.

“This constitutional breakdown was predictable,” Juan Papier, Americas researcher at Human Rights Watch (HRW), wrote in a tweet on Thursday.

“El Salvador has long been on the way to becoming a dictatorship and many, due to ideological bias, cowardice, geopolitical interests or obsession with immigration, did not want to raise their voices in time or help prevent it,” he said. 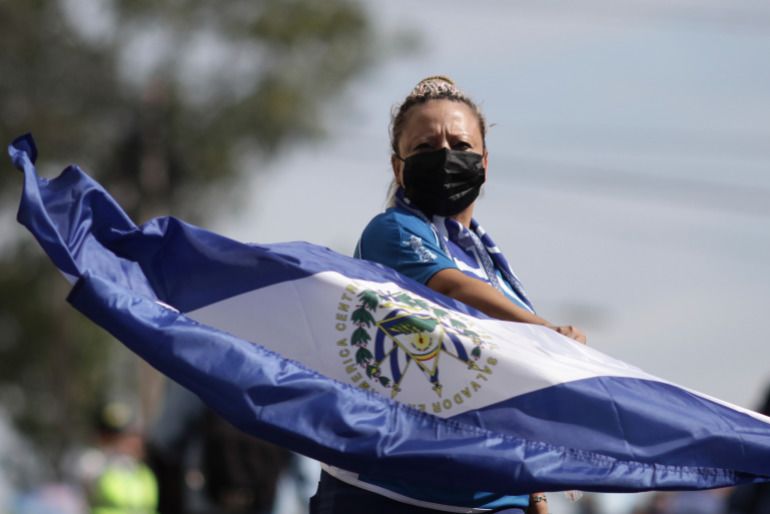 A person waves a flag during an anti-government march on Independence Day in San Salvador, El Salvador

Bukele, who has adopted Bitcoin as legal tender, in recent months has led a crackdown against gangs, using emergency powers that congress on Wednesday extended for a sixth time.

Rights groups say many innocent people have been arrested without cause, and they have documented a range of abuses, including deaths in custody, and civil rights violations under the state of emergency.

In August, El Salvador’s chief of police announced that more than 50,000 people had been detained during the crackdown.

“Some in the international community … they criticise the capture of gang members, as if they wanted us to be doing badly again,” Bukele said on Thursday. “This is the only way for El Salvador. We already proved it; this is not a campaign promise.”

In a report in June, HRW said “gross human rights violations, including arbitrary detention seemingly based on individuals’ appearance and social background, as well as short-term enforced disappearances” had been committed.

The report also found that Bukele’s government had significantly weakened democratic institutions in El Salvador, allowing his administration to operate with little checks on his executive power.