Commuters face travel misery for the return to work on Tuesday as a fresh wave of strike action on the railways is set to cause chaos across the entire working week.

The latest walkout by around 40,000 members of the Rail, Maritime and Transport union (RMT) will shut down most rail services across the country as many return to travelling after the festive period.

Members of the RMT at Network Rail and 14 train operators will stage two 48-hour walkouts from Tuesday and Friday, while drivers in the Aslef union will strike on Thursday. 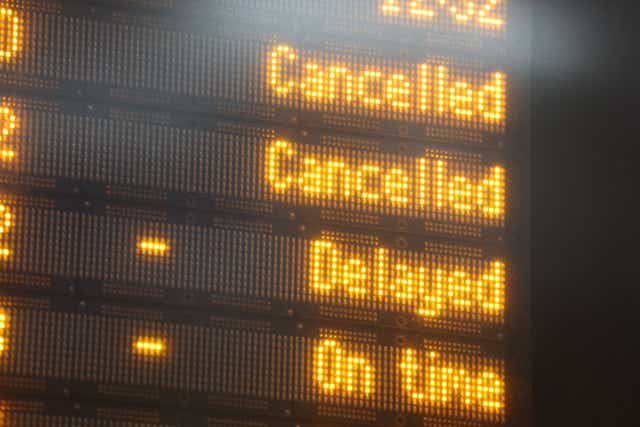 Passengers are being warned to expect “significant disruption” as only a limited number of trains will run.

The advice is to only travel if absolutely necessary, allow extra time and check when first and last trains depart.

There may also be disruption to services on Sunday January 8 as striking workers return to their duties.

On RMT strike days, around half of the network will shut down with only about 20% of normal services running.

Trains that do run will start later and finish much earlier than usual, with services typically running between 7.30am and 6.30pm on the day of the strike. 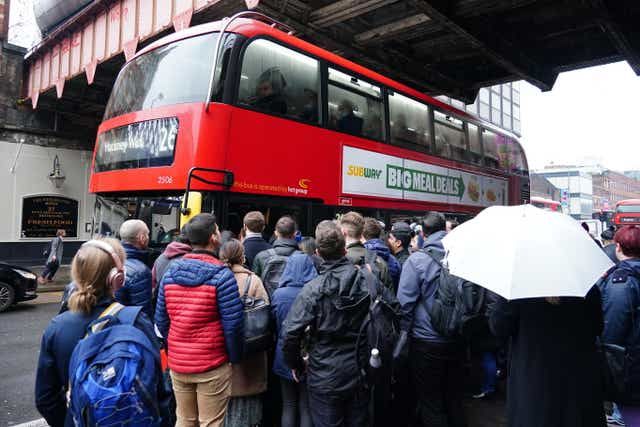 Commuters queue for a bus

TfL has warned strikes will also cause disruption on several Tube lines.

The Bakerloo Line will have no service between Queens Park and Harrow & Wealdstone on Tuesday and Wednesday due to strike action.

Both the Circle and Elizabeth lines will have a reduced service while the District line will be without service between Parsons Green and Wimbledon from 5.30am to 6.30pm on both days.

The train drivers strike by Aslef members on January 5 will affect 15 operators and result in even fewer services running, with some companies operating “very significantly reduced” timetables.

The RMT also has an overtime ban in place at 14 train operating companies until Monday that will affect the level of cancellations and punctuality of some services.

RMT boss Mick Lynch told BBC Radio 4’s Today programme he hoped the new year could bring moves towards a deal but there had been “radio silence” from the Government since mid-December.

Rail workers had been offered a five per cent pay rise for last year and four per cent in 2023 – with a guarantee of no compulsory redundancies before 2025. In addition, a discount scheme for families of rail workers was proposed. That offer was rejected by the RMT in December.

“I hope we can all work towards a deal but we haven’t heard from anyone formally since mid-December,” Mr Lynch said.

“The Government simply will not give a mandate to the employers, Network Rail and the train operators that will allow this deal to be resolved. They’re sitting on their hands and are noted by their absence from this scene.

“They keep saying that they’re facilitating a deal. And I think it’s absolutely the opposite to that.

“They’ve put a block on the deal and they’re an obstacle rather than a facilitator.”

He said “sensible” proposals would mean the ongoing disruption could be brought to an end.

“Everybody keeps telling me that I’ve caused massive disruption and I’m against the spirit of Christmas and all the rest of it.

“We don’t want disruption, we want a settlement. There’s been too much disruption on the railway caused by government policy and if we can get sensible proposals we can work up towards a solution.” 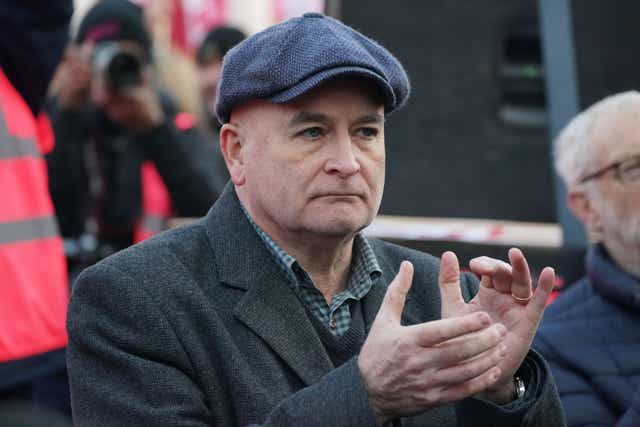 Mick Lynch of the RMT

The RMT is campaigning against plans to close ticket offices, cut jobs and move the industry to widespread driver-only operation.

The Department for Transport has rejected claims they have not been in contact with the union in recent weeks, saying they have been pushing for a resolution, although it accepts there had not been a formal meeting with ministers since December 15.

A Department for Transport spokesperson said:“Passengers have rightly had enough of rail strikes and want the disruption to end.

"The Government has demonstrated it is being reasonable and stands ready to facilitate a resolution to rail disputes. It’s time the unions came to the table and played their part as well.

“Inflation-matching pay increases for all public sector workers would cost everyone more in the long-term - worsening debt, fuelling inflation, and costing every household an extra £1000.

“Unions should step back from this strike action so we can start 2023 by ending this damaging dispute.”

Aslef general secretary Mick Whelan said his union is "in it for the long haul", adding: "We don't want to go on strike but the companies have pushed us into this place.

"They have not offered our members a penny and these are people who have not had an increase since April 2019.

"That means they expect train drivers at these companies to take a real-terms pay cut - to work just as hard for considerably less - when inflation is running at north of 14%.

"We are always happy to negotiate - we never refuse to sit down at the table and talk - but these companies have offered us nothing, and that is unacceptable."

Daniel Mann, director of industry operations at the Rail Delivery Group, said: “No-one wants to see these strikes go ahead and we can only apologise to passengers and to the many businesses who will be hit by this unnecessary and damaging disruption.

“We would advise passengers to only travel if it is absolutely necessary during this period, allow extra time and check when their first and last train will depart.

“Passengers with tickets for between 3-7 January can use their ticket the day before the ticket date, or up to and including Tuesday January 10.

“This dispute will only be resolved by agreeing the long overdue reforms to working arrangements needed to put the industry on a sustainable footing, rather than unions condemning their members to losing more pay in the new year.”

Disruption from the rail strike could be compounded by more than 100 road traffic officers and control room operators working for National Highways across England launching a 48-hour strike on Tuesday.

The walkout by members of the Public and Commercial Services (PCS) is part of industrial action in a bitter dispute over pay, pensions and jobs.

Around 100,000 PCS members working in 124 government departments and other bodies have voted for strike action.

PCS general secretary Mark Serwotka said: "This strike is likely to cause problems for people returning to work after the Christmas break, and while we regret that, it's important to remember our action could be called off today if Rishi Sunak put some money on the table for our members."

National Highways said it has "well-rehearsed resilience plans" to ensure the 4,500-mile strategic road network remains open and safe and is confident the industrial action will have minimal overall impact.