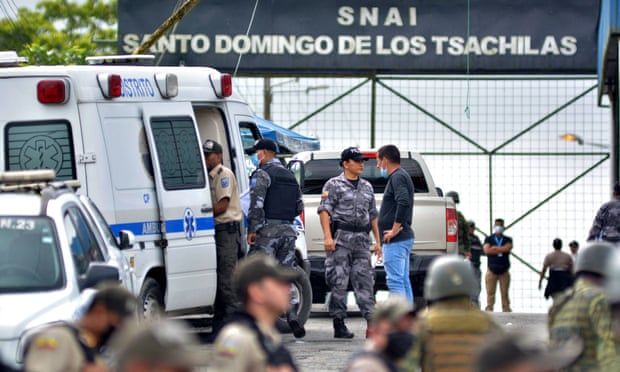 Scores of inmates are feared dead in Ecuador after a deadly prison riot broke out between rival drugs gangs, in the latest bloody episode of a wave of violence that has engulfed the country’s prisons.

Forty-three prisoners were confirmed dead on Monday as more than 200 police commandos retook control of the maximum-security wing of the Santo Domingo de los Tsáchilas prison, about two hours drive from the capital Quito, but the death-toll is likely to rise.

Interior minister Patricio Carrillo told reporters that the majority of the victims had been “executed with bladed weapons”.

It is Ecuador’s sixth deadly prison massacre since the beginning of 2021 pushing the death toll to nearly 400 as violence has spiked to unprecedented levels fuelled by rivalry between drug trafficking gangs. More than 300 inmates were slaughtered in the country’s prisons last year, including one massacre in Guayaquil’s Litoral penitentiary in which 119 prisoners lost their lives.

Gruesome images on social media showed mutilated bodies strewn in a courtyard in the jail. Meanwhile, local television broadcast images which have become all too familiar to Ecuadorean viewers, showing dozens of relatives, mostly women, who had gathered outside the jail desperate for news of their loved ones.

“There was really a lot of cruelty,” Ecuador’s police chief, Fausto Salinas, told journalists, adding that hand grenades, machine guns, revolvers and ammunition had been found at the jail. Earlier on Monday, he told local television that the immediate trigger for the violence was the transfer of a gang leader from another prison. “The presence of this person generated conflict and violence,” he said, criticising the judicial authorities who ordered the transfer.

This latest massacre is the first large-scale violent incident in the Santo Domingo prison this year. In February 2021, 33 inmates were killed in the same prison, many of them decapitated and dismembered, as part of a simultaneous attack coordinated by criminal gangs in different prisons that left a total of 78 dead throughout the country.

Ecuador – which sits between Colombia and Peru, the world’s two largest cocaine-producing countries – is a strategic smuggling route due to its long Pacific coastline and large shipping and fishing fleets.

In the first four months of this year, Ecuadorean authorities have seized 85 tonnes of cocaine, twice the amount seized the year before.

Ecuador’s president Guillermo Lasso, who was on an official visit to Israel, expressed his condolences to the families of the victims and said: “This is the unfortunate result of gang violence,” in a tweet.
Add Comment