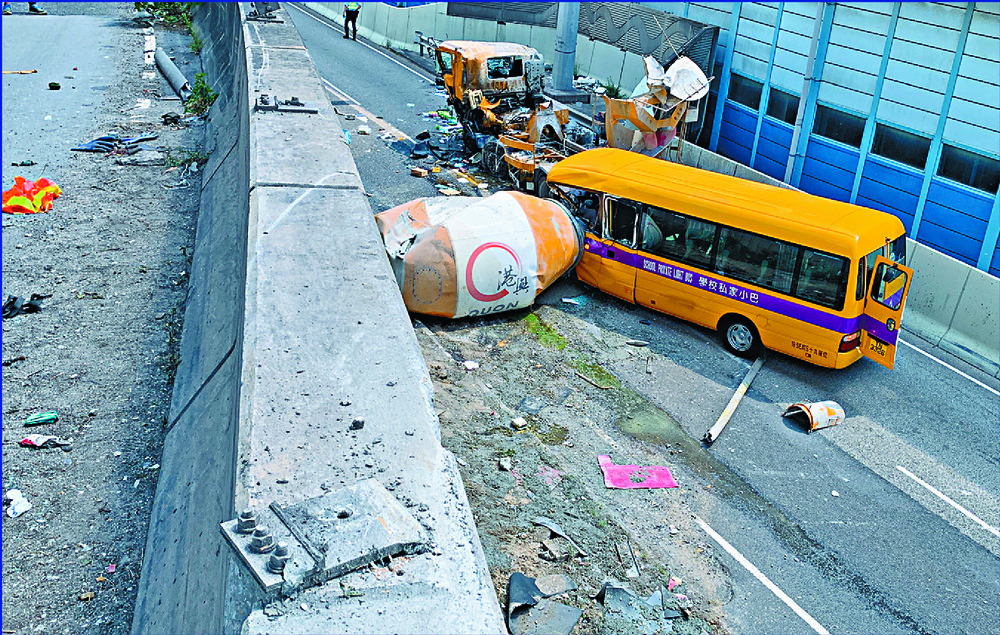 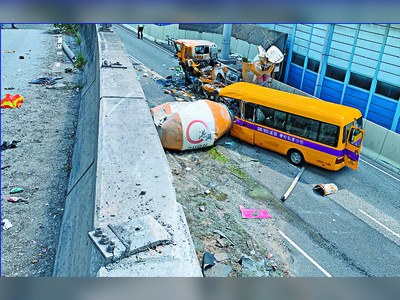 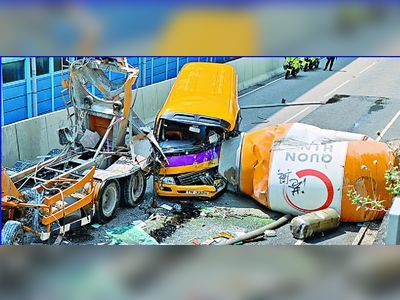 A cement mixer driver died after his truck fell from a flyover and crashed into a school bus on the highway below in Cheung Sha Wan yesterday.

The school bus driver and three staff on board suffered minor injuries. No children were on the bus.

The 67-year-old truck driver, surnamed Pang, was unconscious when firefighters rescued him from his badly damaged vehicle, but was pronounced dead at Caritas Medical Center in Cheung Sha Wan.

The truck was traveling on Tsing Sha Highway in the direction of Yau Ma Tei when the driver lost control and crashed into a barrier and a four-meter section of a guardrail at a section of the overpass near Maryknoll Fathers' School (Primary Section).

The vehicle plunged 10 meters into the intersection of Lin Cheung Road and Lai Po Road where a school bus was traveling. Its driver and three passengers, aged 46 to 74, were rushed to Caritas Medical Center.

A cargo truck driver surnamed Leung said he was driving on the Route 3 expressway when he saw clouds of billowing dust at the scene of the crash.

"The cement mixer had been detached and other drivers were scrambling to help," he said. "But the chaotic scene was covered in clouds of dust, obscuring everyone's vision."

Concrete leaked out of the truck, which is owned by Quon Hing Concrete Co. The front end of the school bus was smashed, but the passenger section remained largely unaffected.

Inspector Chan Shing-chung of the Traffic Kowloon team said the investigation will focus on the structural integrity and carrying capacity of the vehicle as well as the driver's physical and psychological condition.

Police were able to determine that the truck was traveling at 58 kilometers an hour, which was within the speed limit, he said. And that a road safety task force will evaluate the effectiveness of the barriers on the flyover.

A similar accident occurred in 2003 when a double-decker bus fell off a bridge near the Ting Kau section of the Tuen Mun Road in Tsuen Wan, killing 21 people and injuring 20.