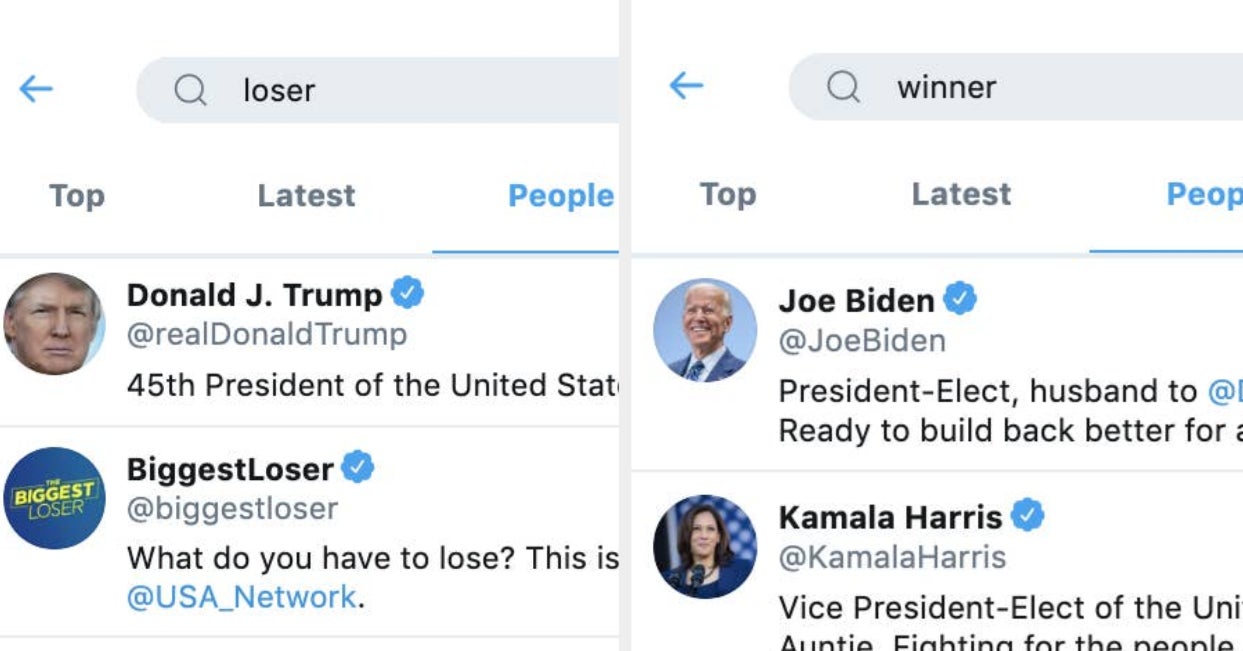 Donald Trump Shows Up First When You Search For "Loser" On Twitter. Here's Why.

“If an account is mentioned often alongside certain terms, they can become algorithmically surfaced together as an association.”

On Saturday morning, Joe Biden won the 2020 US presidential election, and people on Twitter noticed an odd wrinkle.

When they searched for “loser,” President Donald Trump's account was the first result.

If you search "loser" on twitter, Donald Trump is the first person thar will come up and I think that's beautiful pic.twitter.com/AEn5kll7Qt

For some people, searching for the word “winner” likewise showed Joe Biden and Kamala Harris as the first two results, while Trump appeared third.
Despite speculation that the search results might have been the result of a decision that Twitter made this morning, the results are simply due to how its search tool works, according to the company. A Twitter spokesperson said that platform activity can lead certain words together to become associated with each other, leading to those kinds of search results.

“If an account is mentioned often alongside certain terms, they can become algorithmically surfaced together as an association,” a Twitter spokesperson told BuzzFeed News. “These associations are temporary and ever-changing based on how people Tweet.” 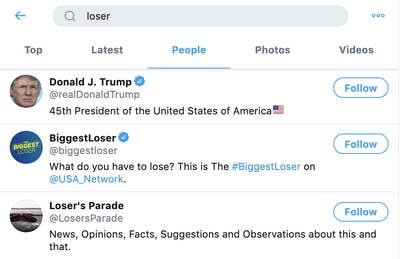 The phenomenon is similar to what’s happening on Google when people search for the word “winner.” In an incognito window that does not factor in a user’s past search history, the search engine’s first auto-populated result for “winner” is “winner of election 2020.”

On Saturday morning, tech companies rushed to update their platforms with the most up-to-date information about the election results.

Facebook updated its Voting Information Center and placed a notification at the top of Instagram feeds with information about Biden’s projected victory.

Twitter led its Explore tab, which collects news and trending topics, with the news, and YouTube placed a label on election-related videos that said, “The AP has called the Presidential race for Joe Biden.”