A recent report found that only a third of the people in the top jobs come from lower socio-economic backgrounds. Why? Kate Wills investigates

When Chris Carlisle was invited to his interview at Deutsche Bank, he needed a suit. “I had no money so I bought one from a charity shop but that looked terrible so I borrowed one from a friend,” says Carlisle, who grew up in Burton-on-Trent and went to a state school. Carlisle had a PhD from Cambridge, and he managed to land a job as an investment banking analyst. “It was such an alien environment to me. All these people in suits. Years later I discovered my file and one of the directors who interviewed me had put a big cross against my name, saying ‘Too scruffy’,” he recalls, laughing. “My boss was called Hugh and he was privately educated and hailed from some country estate somewhere. My dad was an electrician, my background was pretty working-class, so I did feel like an outsider.”

This was more than 20 years ago, but it may be that not much has changed. A report last month found that just 36 per cent of senior leadership positions in the City are held by staff from a working-class background. The City of London’s socio-economic diversity task force, which the Treasury and business department commissioned, has set a target of 50 per cent of leaders from a lower socio-economic background by 2030. Catherine McGuinness, co-chair of the task force and former corporation policy chief, said: “Where an employee comes from, how their accent sounds, or what jobs their parents held, should not dictate how far they progress in the financial and professional services sector.” Major banks including KPMG have now signed up to set goals on class representation, but are quotas the answer?

Peter Saunders, sociologist and the author of Social Mobility Truths, doesn’t think so. “Defining ‘working class’ is a minefield and sociologists have amused themselves for many years arguing about this, so the practical implementation of any such policy would be strewn with difficulties about who is covered and who isn’t, and would inevitably generate fresh unfairness,” he explains. “It is in the interests of City firms themselves to recruit the best people, so if there are bright working-class kids who want to go down this route, they will find doors open to them — remember the ‘barrow boys’ recruited after Thatcher’s Big Bang in the Eighties? If there is a problem it is not that firms are failing to appoint good working-class candidates, but that fewer working-class kids are applying. Outreach and mentoring schemes have more effect than positive discrimination.”

One such mentoring scheme is run by the social mobility charity UpReach, which offers students coaching, mentorship and exclusive opportunities. “We help working-class graduates across 10 different industries and we’ve found that financial services has the biggest hurdles to entry,” says Stephanie Lieber, acting CEO of UpReach. “One of the key barriers is that you need to apply in your first term of your first year of university for the Spring Week internships, and students from lower socio-economic backgrounds are often not thinking about careers at that stage. So we’ve said to the companies we work with, ‘OK, if you’re not going to delay the deadline, run a work experience programme with us later in the year’. Targets are meaningless if you’re not changing your recruiting process.”

Aoylid Hossain, 24, from north London, recently completed UpReach’s Banking and Finance Springboard, and currently works as an asset management associate at Coutts. “I think the biggest thing holding back people from working-class backgrounds like mine is not knowing the right people and not knowing how to articulate themselves,” he says. “UpReach were amazing at supporting me through numerous rounds of interviews at my assessment centre. We practiced role plays and team-building exercises. A lot of people there were stressed but I was excited.”

Hossain, whose parents work in manual labour jobs, says he’s never felt discriminated against because of his background. “I think it’s really important that you own your identity and know that you can bring a different lens to the equation. Mentoring schemes are great, but we also need more understanding from the banks about the challenges people from different backgrounds face.”

It might be as simple as providing travel and accommodation expenses to an intern up front (rather than reimbursing them afterwards), or relaxing the policy on wearing a suit to interviews. These are some of the suggestions of Fin Wright, from The 93% Club, a members club for people who went to state school — 93% of the population. “The finance industry has made huge strides in other kinds of diversity such as ethnic background and gender but when it comes to social class, the avenues into finance are still opaque and there’s still a culture of referral and giving your best friend’s son a job,” he says. “Because class can be difficult to define, people feel awkward talking about it and it’s become almost a taboo.”

Wright says that the pandemic may have had a positive effect for what he prefers to call “socially-mobile applicants”. “Zoom interviews are great if you’re not based in London or you’re a young carer,” says Wright. “Plus a lot of banks have relaxed their dress code. Not everyone can afford to buy a suit they wear once, and if they can it’ll be Primark not Prada.”

Most of the campaigners and bankers I spoke to for this article said that things have improved since the Sutton Trust’s report in 2016, which claimed that working-class students were “systematically locked out of the top jobs in investment banking”. UBS now has a work-experience programme open to 14-18 year olds from disadvantaged areas in east London. Bank of America has 80 mentors offering work experience and advice and Deutsche Bank has teamed up with the Sutton Trust to provide work experience to 300 high-achieving state school children.

“Class has been far behind other diversity issues but it’s getting much more traction now,” says Dr Rebecca Montacute, senior research and policy manager at The Sutton Trust. “But we know that finance has the highest level of social segregation of any industry. There’s a high use of personal connections to get internships and jobs, and a low level of public advertisement. We know there’s a class pay gap at all levels of a company, not just the leadership roles.” In November the Social Mobility Foundation found that professionals from working-class backgrounds earn £6,718 less on average, while women and most ethnic minorities face a double disadvantage. 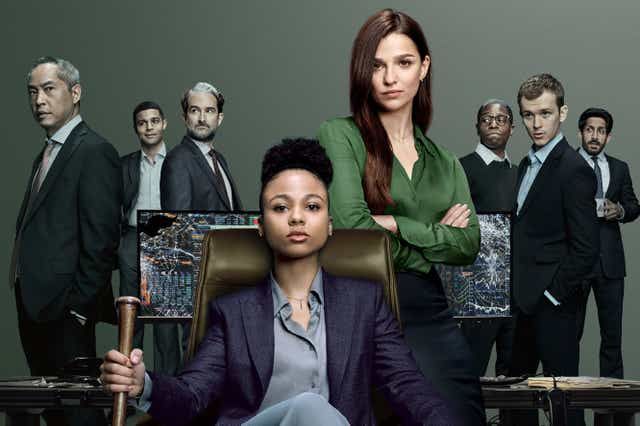 Some argue Industry was an accurate portrayal of prejudice in the City
One senior trader, who asked not to be named for this piece for fear of being “outed” as working-class, says over 20 years in the industry he’s learned how to “pass”. “Banking is all about being the right ‘fit’ and so I’ve changed my accent, I’ve started going to the theatre and on skiing holidays,” he says. As one character in the BBC TV show Industry put it: “How do you expect to sell financial products if you sound like a miner?”

Some feel that prejudice still lurks. Another financial adviser, whose father was a postman, believes that tweeting support for the task force quotas is the reason he was recently passed over for a job he knew he was qualified for.

But Chris Carlisle, who is now a partner at a small boutique firm, disagrees. “Yes, my accent has softened but I’ve never liked skiing and I think golf is a waste of time,” he laughs. “Maybe 15 years ago if you wanted to do a deal you had to take the senior people to your club and name drop so and so, but things are done differently now. I’m more likely to use LinkedIn.”

And now that he’s the one in the hiring chair, does he care about the cut of an applicants’ suit? “Not at all and I don’t even really look at their education. It’s all about your attitude. And your ability to do the maths.”