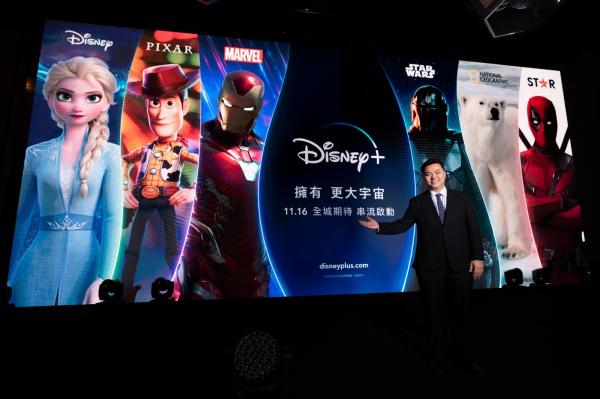 Disney+ to debut in November, charging HK$73 a month

Disney+ is coming to Hong Kong in November with a monthly fee of HK$73, Disney announced on Thursday. Up to seven users can use the same account.

Disney announced in August that it will officially launch its online streaming platform Disney+ in Hong Kong on November 16 this year, bringing movies and dramas from around the world to Disney+ members in Hong Kong.

Also included will be the original TV series WandaVision, Loki, The Falcon and The Winter Soldier, What If...?, Hawkeye, Ms. Marvel, Moon Knight, She-Hulk and The Mandalorian.

Disney+ is a collection of films and episodes from six iconic brands including Disney, Pixar, Marvel, Star Wars, National Geographic and Star. There will be Cantonese dubbing and traditional Chinese subtitles for audiences in Hong Kong.

The platform currently supports 23 languages, including English, French, Italian, Japanese, Korean, Mandarin, Spanish, and will increase to 28 in the future.

In addition, Disney+ supports streaming on up to 4 devices at the same time and can be downloaded for viewing on up to 10 devices.

Each account can have up to 7 users. They can customize their own name, interface language, on or off auto-play, and GroupWatch.

Members can choose their profile photos from over 100 characters.

The first batch of Hong Kong movies to be released will be the Cold War series, The Grandmaster, The Mermaid, Journey to the West: Conquering the Demons, One Second Champion and Weeds on Fire.

Netflix, another streaming platform, charges subscription fees ranging from HK$63 to HK$93 per month, depending on the number of devices which can stream at the same time and video quality. It allows family members to share the same account.

For Disney+ subscribers who choose to pay an annual fee of HK$738, which is an average of HK$61.50 per month. It will offer 4K and simultaneous playback on four devices, just like for overseas Disney+ accounts.

Francis Fong Po-kiu, honorary president of Hong Kong Information Technology Federation, said that Disney+ can attract a lot of viewers as it has bought the copyright of Disney and Marvel superhero films, which means these films will be exclusive on the Disney+ platform.

"Disney+ can emerge as a strong competitor in Hong Kong's online streaming platforms market as it has lots of popular films, short clips and TV dramas, but how competitive can it be depends in the variety of program choices available on the platform," he stated.
Add Comment