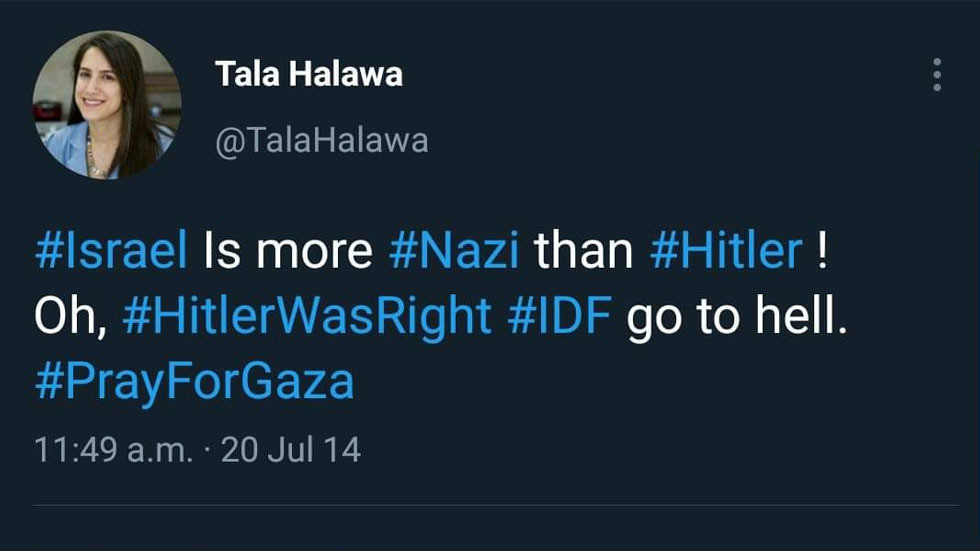 A former BBC journalist who was sacked earlier this year after historic anti-Semitic content was found in her Twitter feed, has been condemned on social media for blaming the “pro-Israel mob” for her firing.

On Wednesday, Tala Halawa, a Palestinian journalist who was unceremoniously let go from the BBC in June, blasted the British broadcaster for her sacking and accused it of giving into the “pro-Israel mob.”
Halawa, who has set her Twitter location as Palestine, worked as a digital journalist at BBC Monitoring from 2017, according to the Times of Israel, citing her now-deleted LinkedIn page.

In a statement shared on Twitter, Halawa apologised for comments made in 2014 – seemingly a reference to her now-infamous ‘Hitler was right’ tweet – but caveated her apology by saying her remarks were made during the Israeli bombardment of Gaza.

She slammed the BBC for not allowing her to apologize and move on, but instead opting for “trial by social media.” Halawa claims the broadcaster’s actions “amplified troll voices,” and blamed her dismissal on the “pro-Israel mob.”

The journalist, who is credited for having contributed to stories such as ‘Israel-Gaza violence: The children who have died in the conflict’, was outed in May after a historic tweet posted in 2014 in which she stated, “Israel is more Nazi than Hitler! Oh, #hitlerwasright. IDF (Israel Defense Forces) go to hell” was found on her feed.

Perhaps understandably, the response to her statement on Twitter appears to be fairly one-sided, with most users condemning Halawa for failing to truly back down from her anti-Semitic remarks.

“Maybe one day she’ll wake up and stop spewing her Nazi garbage,” wrote Mark Halawa, a Palestinian living in Kuwait, who, as an adult, found out he was actually Jewish. He added that he had “unfortunately” also latterly learnt that he was related to the disgraced journalist.

Another account concurred, labeling her statement and apology “troubling.” “In a tweet that claimed she was not given an opportunity for reflection and reconciliation, #TalaHalawa spewed hate and vitriol mixed with antisemitic tropes.” The poster added that, in their view, the BBC had clearly made the right decision to get rid of Halawa.

One person stated that, as an apparent anti-Semite, Halawa should never be allowed to work for a mainstream news agency again, while one commenter claimed that her only regret seemed to be having been caught out. One tweet asserted that Halawa’s journalistic integrity had been further compromised by her decision to “gaslight” Jews rather than take responsibility for her actions.

“An apology at the time would have sufficed,” another wrote, adding that the repercussions from the BBC would have been many times worse if the offending tweet had been posted by a white man.

Despite the apparent lack of support for Halawa in either tweets or comments, her statement was shared more than 500 times and has received more than 1,300 likes.

Political campaigner Jackie Walker, who is Jewish, responded to the statement by noting: “This is the truth of our media and the Israeli lobby.” Another person wrote “deep pockets” and said the fault was Ramses II’s, referring to the Egyptian pharaoh who is believed to have been ruler when Moses led the enslaved Jews to freedom in the book of Exodus.

While Halawa is no longer associated with the BBC, the scandal has further challenged the broadcaster’s integrity and highlighted the organisation’s apparent lack of background checks for new hires.