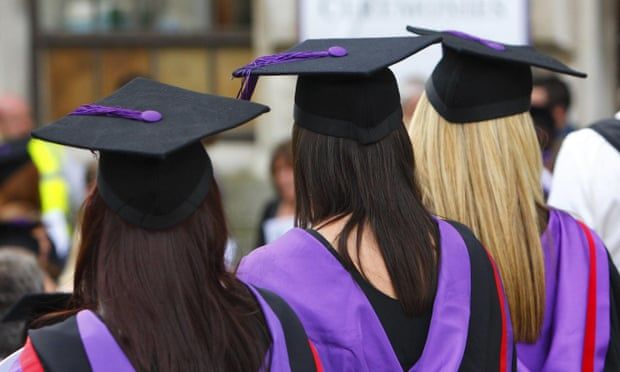 Graduates from poorer backgrounds earn half as much as their more privileged peers in their first job after university because they put themselves forward for fewer roles and lack the family connections and financial support to hunt for top jobs, a survey has shown.

The survey of 5,000 graduates suggested that those whose parents held professional roles, including chief executives, doctors and teachers, earned an average of £23,457 in their first job after university, compared with just £11,595 among those whose parents held technical, manual or service jobs. After university, poorer graduates applied for an average of six jobs compared with nine for their wealthier peers, the figures showed.

“The stark reality is where you grew up and what your parents did still has an impact on your opportunities and your earning potential,” said Sarah Atkinson, the chief executive of the Social Mobility Foundation, which produced the report with TotalJobs.She said wealthier graduates tended to benefit from being able to “hold out for the job and salary” they wanted, as well as having the confidence to aim higher in job applications. They are also better at negotiating over salary, and able to leverage unpaid work experience to start at a higher level, she added.

Atkinson urged employers to take steps to ensure they were “open to the biggest pool of talent and applicants with the most potential, not just polish”. This included targeting deprived areas of the country, taking into account socioeconomic circumstances in recruitment, reporting on the backgrounds of their staff and supporting disadvantaged graduates with moving to a new city.

She added that universities should work closely with employers to level the playing field by helping disadvantaged students build their CV, find opportunities and transition to work.

The report also showed that more privileged graduates were 47% more likely to use family connections to find their first job. This was especially the case for top earners: of those who earned more than £50,000, 61% said family, friends or former colleagues had helped them to secure a job, compared with just 35% of people earning less than £50,000.

Privileged graduates were also twice as likely to receive financial support during the job-hunting process, enabling them to undertake more unpaid work experience placements. They were also more confident they would find a job they wanted (71% compared with 50%) and benefited from cultural advantages such as taking inspiration from their parents’ professions in their job search.

Willingness to move was also identified as a barrier in the report, with just 64% of poorer graduates open to relocating compared with 76% of their more privileged peers. Those from lower socioeconomic backgrounds tended to look for roles in the areas in which they grew up, where they often found a lack of jobs that matched their skill set. The report suggested this could be due to anxieties about the cost of moving to and living in bigger cities.

Atkinson added that there were also cultural reasons. “Young people from working-class backgrounds can find that in leaving their geographical community at home they may feel they’re leaving it behind in a more philosophical sense, which can be hard. They tell us they don’t belong at home any more, but also they don’t feel they belong in a new professional environment because they’re conscious of their background and being different,” she said.
Add Comment