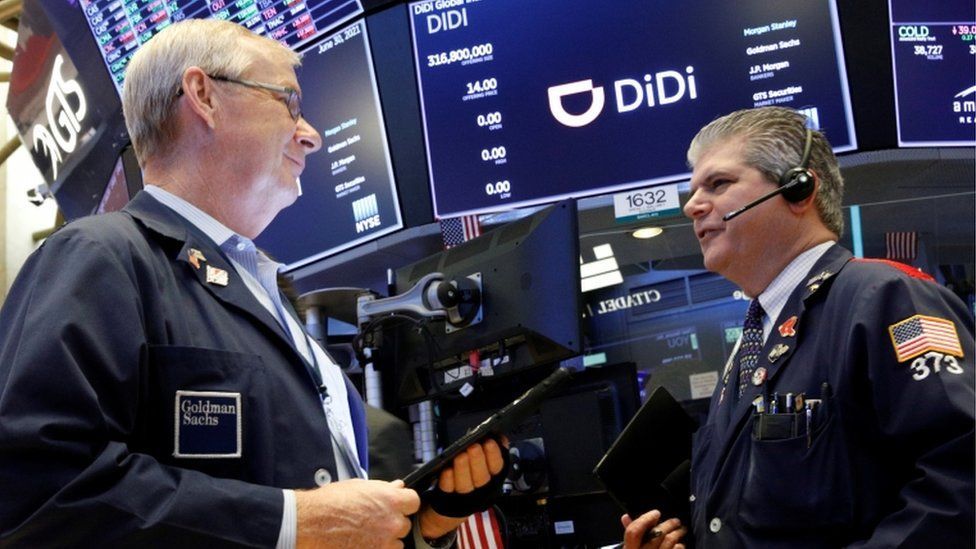 Shares in the ride-hailing company plunged nearly 20% the first day of US trade after the 4 July break.

At one point on Tuesday, its share price slid by 25% to $11.58, well below the $14-per-share price offered at its initial public offering (IPO).

Its removal from app stores does not affect existing users, but will stop new users registering on the country's biggest ride hailing platform.

Didi, a platform similar to Uber or Lyft, gathers vast amounts of real-time data every day, which is used to analyse traffic patterns and for autonomous driving technology.

The Cyberspace Administration of China (CAC) announced last week it was investigating the firm to protect "national security and the public interest".

"After checks and verification, the Didi Chuxing app was found to be in serious violation of regulations in its collection and use of personal information," it said in a statement.

"The company will strive to rectify any problems, improve its risk prevention awareness and technological capabilities, protect users' privacy and data security, and continue to provide secure and convenient services to its users," Didi said in a response on Monday.

In addition, the Chinese cabinet has said it will step up supervision of Chinese firms listed off-shore.

It set out new guidelines on Tuesday saying that watchdogs must improve cross-border co-operation over audits, and update rules "on data security, cross-border data flow and other confidential information management."

Shares in other Chinese parent companies listed in the US such as truck-hailing firm Full Truck Alliance (FTA) and job-seeking platform, Kanzhun, also tumbled after the announcement.

On Monday, the CAC also said that it plans to investigate FTA. Like Didi, FTA recently made its debut on the New York Stock Exchange, raising $1.6bn (£1.1bn).

Didi raised $4.4bn in its own IPO last week, in what was the biggest listing in the US by a Chinese company since retail giant Alibaba's debut in 2014.

But Shifara Samsudeen, an analyst at LightStream Research warned that the company's revenues will likely be affected by the tech crackdown.

"Didi's app ban will hurt its user growth and at the same time, the existing users of Didi's app will also have a certain level of reservation over using the company's app due to fear of compromising their personal data," she said.

"So, it is obvious that Didi's top line will be affected."

Founded in 2012, the ride-hailing company is particularly popular in China's urban cities. More than 20 million rides are arranged through the app in China every day, on average.