Recent violent disorder in Leicester caused shock and outrage and prompted dozens of arrests, but how much was it fuelled by misinformation posted online?

We've spent the past week trying to unpick some of the false claims in and about Leicester and tried to see how much they spread both in the run-up to the disorder and the aftermath.

Temporary chief constable Rob Nixon told BBC Two's Newsnight there had been a deliberate attempt by people to use social media in a destructive way.

Mayor Sir Peter Soulsby also blamed online disinformation and said otherwise there was "no obvious local cause for this at all". At least one of those sentenced over the disorder has admitted being influenced by social media.

When we spoke to people in Leicester, either community leaders, or those who otherwise had experience of the disorder, they singled out particular pieces of misinformation that had fuelled tension in the run-up to the worst of the disorder on the weekend of 17-18 September.

"Today my 15-year-old daughter… was nearly kidnapped," read a post uploaded on to Facebook, supposedly by a concerned father. "3 Indian boys got out and asked her if she was Muslim. She said yes and one guy tried to grab her."

The post was liked hundreds of times, not on Facebook but on Twitter after Majid Freeman, a community activist, shared the family's story on 13 September. He also shared a message from the police which he said was "confirming the incident which took place yesterday [12 September]".

But there had been no kidnap attempt.

A day later, Leicestershire Police issued a statement after investigating and stated that "the incident did not take place". Majid Freeman deleted his posts and said the attempted abduction had not happened and that his initial version had been based on conversation with the family making the allegation.

But damage had already been done and this false kidnap claim kept being regurgitated on other platforms.

On WhatsApp, messages forwarded many times over were initially taken by some as the truth. On Instagram, profiles - some with hundreds of thousands of followers - shared screenshots of the original post and allegedly accused a Hindu man of being behind the "failed abduction".

But it's not possible to gauge the scale of spread in private networks. And as far as public posts go we have used the CrowdTangle tool and been unable to find any repeating the attempted kidnapping claims. Posts could have been deleted of course, and the claims may still be circulating in private groups.

Many in Leicester have said the roots of the tension go back much further. A swathe of media reports have focused on an incident in Leicester following a dramatic victory for India over Pakistan in cricket's Asia Cup in Dubai on 28 August.

As with so much misinformation what happened next was a matter of distortion rather than complete fabrication.

Something did happen. Video from that night shows a group of men, with several wearing India kits, marching down Melton Road in Leicester shouting "death to Pakistan" before scuffles broke out and the police arrived.

Many on social media seized on another video supposedly showing a Muslim man being attacked after walking into the crowd. But it has subsequently been widely suggested that the man was a Sikh. 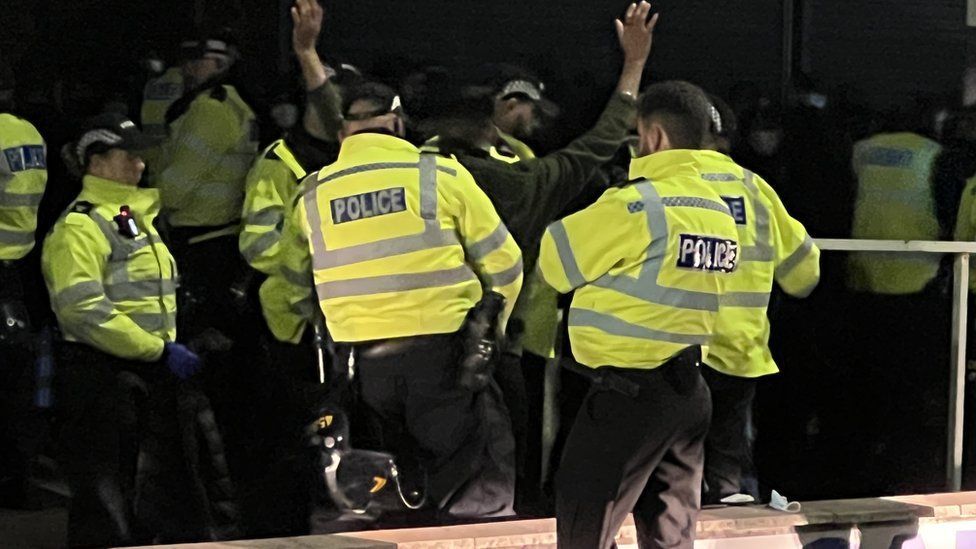 There are some in Leicester who trace the disorder back much further, at least to an incident on Sunday 22 May. Video has been circulated on social media purportedly showing a 19-year-old Muslim man being pursued by a group of men described in social media posts as "Hindu extremists". Other posts referred to Hindutva, an ideology mostly associated with right-wing Hindu nationalists in India.

The video itself does not show much - it is grainy and black-and-white and shows a group of men running down a street before an altercation happens. It's hard to decipher who these men were and what their specific backgrounds are.

Police have said they are investigating a report of a public order offence and have interviewed a 28-year-old man, but that the investigation is ongoing. The religious affiliation of the victim has not been revealed.

While the truth of the incident is still being investigated, the social media posts have consistently been explicit in describing it as religiously motivated.

Picking apart how much the social media distortion and misinformation has actually driven disorder is extremely difficult.

These three incidents are not the only episodes to have prompted flurries of social media activity but they remain the most cited in the run-up to the major disorder on 17 and 18 September. 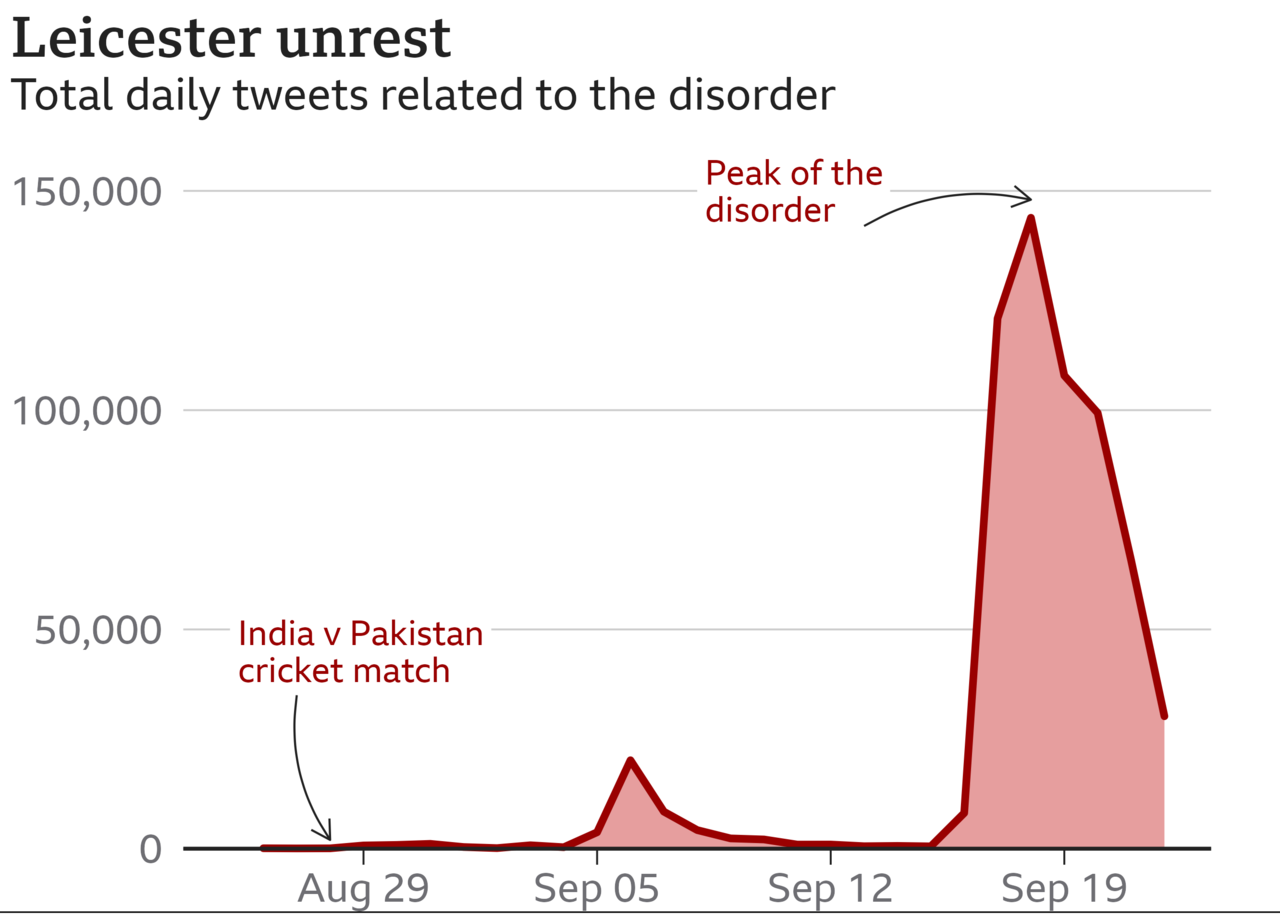 Those events in Leicester, with tensions and disorder suddenly prominent in national media, prompted a massive increase in social media posts.

An investigation by BBC Monitoring - using commercial Twitter analysis tool Brandwatch - identified about half a million tweets in English that mention Leicester in the context of recent tensions.

Within a sample of 200,000 tweets, BBC Monitoring found that just over half of mentions were made by accounts that the tool geo-located to India. The top hashtags used by many of the Indian accounts in the past week included #Leicester, #HindusUnderAttack and #HindusUnderattackinUK.

The BBC found lots of indications of manipulation by accounts using these hashtags.

The most prolific user of some of these hashtags, for example, was geo-located to India, had no profile picture and the account was only started earlier this month. These are classic signs that can suggest "inauthentic activity" ie a likelihood that individuals are deliberately using multiple accounts to push a narrative.

The BBC examined the top 30 URLs that were shared using these hashtags. Of them, 11 were links to articles written by news website OpIndia.com, which describes itself as "bringing the right side of India to you". As well as potentially inauthentic accounts, these articles were also widely shared by genuine accounts including some with hundreds of thousands of followers.

One of the OpIndia articles cited British researcher Charlotte Littlewood, from the Henry Jackson Society, who told GB News that several Hindu families had left Leicester due to threats of violence from Muslims. The article was retweeted nearly 2,500 times. Leicester Police have since said that they were unaware of any reports of families having to leave.

It's important to stress that there was no significant volume of tweets before the outbreak of the major disorder on 17-18 September. 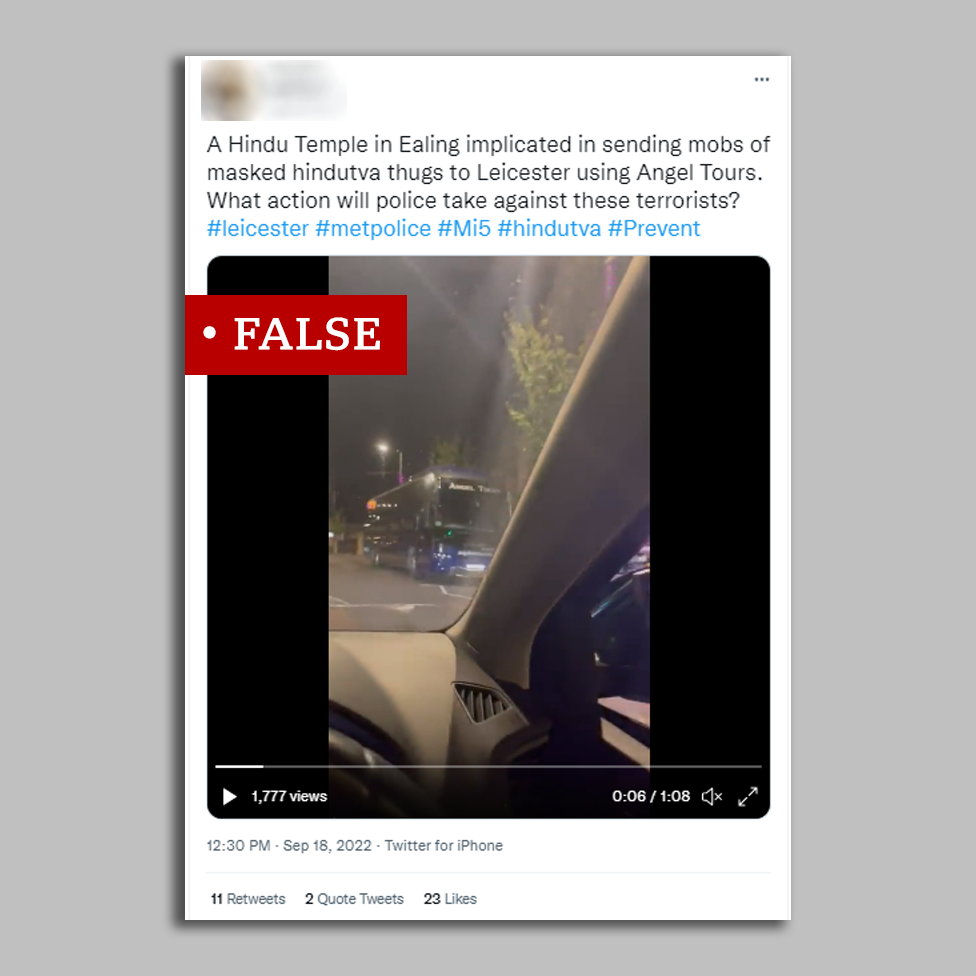 Among the wave of social media activity in the UK prompted by the disorder, claims circulated widely that coach-loads of Hindu activists were being bussed into Leicester to stir up trouble.

All we have to go on is the identities of the people arrested by police. As of 23 September they had arrested 47 people, of whom eight had been charged. Of those arrested, 36 were from Leicester, one from Market Harborough, eight from Birmingham and just two from London. All of the eight who were charged were from Leicester.

Some posts made allegations that a specific London coach company had been used to bus in Hindu activists.

A video that circulated on WhatsApp and Twitter from 18 September showed a coach outside a Hindu temple in London, with a voice claiming the coach had just returned from Leicester. In a video posted the next day on Instagram the owner of the coach company said: "lots of people are calling me, threatening me, abusing me without any reason." 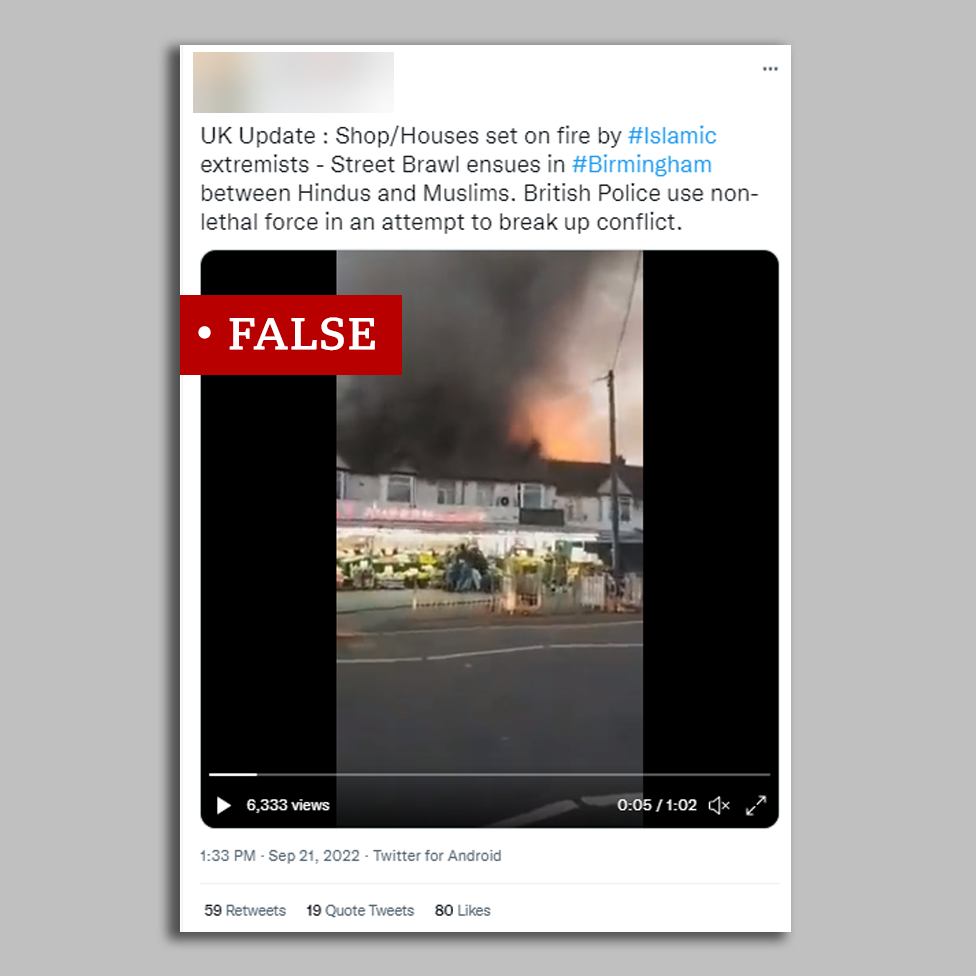 He said that none of his coaches had travelled to Leicester in the past two months and provided evidence from the GPS tracker of the bus in the video showing it had remained in south-east England on the weekend of 17-18 September.

False claims also circulated about the causes of a fire in Birmingham on Monday 19 September. Posts viewed thousands of times on Twitter blamed "Islamic extremists" for setting the fire, without evidence.

West Midlands Fire Service investigated the fire and concluded it started by accident when outdoor burning of rubbish spread to the building.

Of course this is by no means to say that all of the posts that followed in the immediate aftermath of the disorder were misleading or distorted.

One of the most circulated videos showed a group of masked Hindu men marching through Green Lane Road, an area of Leicester with a large Muslim population, shouting the Hindu slogan "Jai Shri Ram".

Another video was circulated with posters saying it showed a Muslim man pulling down a Hindu saffron flag outside a temple. A flag was indeed pulled down at a temple on Belgrave Road in the city on the night of Saturday 17 September and police were investigating. However, the identity of the culprit is unclear.The false claims and inflammatory posts that have exacerbated tensions between Hindus and Muslims have been condemned by many locals from these communities.

For decades, the city has been home to South Asians who came to the UK from parts of India and East Africa, and they have lived side-by-side and fought for equal rights together.

Some people link the disorder and the reaction to it to the Hindutva ideology. They believe that Indian politics is being imported to the city, but thus far the BBC has found no direct link to such groups in the run-up to the disorder.

Another narrative being pushed is that a particular, small South Asian community, allegedly with conservative views, started these tensions. Both Hindus and Muslims we've spoken to have expressed this. Again, there is no concrete evidence to support, nor counter this claim.

It is difficult to pinpoint what has caused this violent unrest, but one thing is clear, social media stands accused of being the catalyst for sowing further divisions.