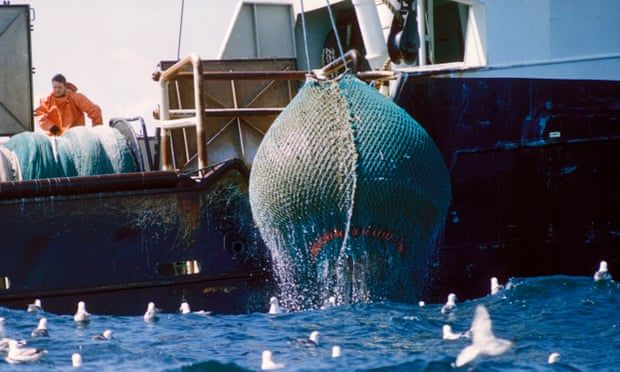 Denmark has accused the UK of breaching the post-Brexit fisheries deal over plans to ban destructive bottom trawling in a North Sea conservation zone.

The UK announced in February that it wanted to ban bottom trawling at the Dogger Bank conservation zone in the North Sea, a move hailed by environmentalists hopeful of seeing a resurgence of halibut, sharks and skate in the once marine life rich sandbank.

In an interview with the Guardian, Denmark’s fisheries minister, Rasmus Prehn, said such plans were not in line with the post-Brexit deal.

“The Brexit agreement ensures full access [for EU vessels] to fish in UK waters until 2026. And therefore, of course, it is a very big problem for us if the British government is going to change that. We find that unacceptable and it’s a breach of our agreement,” he said.

The charge opens a new front for the UK government, which is already embroiled in a rancorous dispute with France over fishing rights, against a wider backdrop of post-Brexit tensions with the EU.

Dogger Bank, a large shallow sandbank about 90 miles north-east of the Humber estuary, has been fished by Danish boats for centuries and is among the country’s most important fishing grounds, according to the Danish government.

Under the Brexit trade and cooperation agreement struck between the EU and the UK last Christmas Eve, EU fishers can continue to access UK waters as before until 30 June 2026, a transition to delay the blow of reduced fishing rights in future.

The deal also commits both sides to “promoting the long-term sustainability” of the 70 common fish in the shared waters.

Prehn said Danish fishers “are already very in a very difficult situation due to Brexit so this would be even more difficult for them and we can’t really accept that”.

While he said it was premature to discuss potential retaliation, he revealed his disappointment over how relations between the UK and Denmark had deteriorated since Brexit.

“It’s really difficult to make an agreement and just one year after we have these problems with one part; that is not really acceptable, that is not how we usually make agreements. With the UK we used to have a very good relationship,” Prehn said.

He was speaking from Brussels, as the UK and EU embark on the final sprint of negotiations to set catch limits for fishing in 2022, ahead of a 10 December deadline.

Denmark and the UK entered the then European Economic Community together in 1973, but arrived too late to influence the first version of the common fisheries policy, leaving a lingering sense of resentment for British officials. 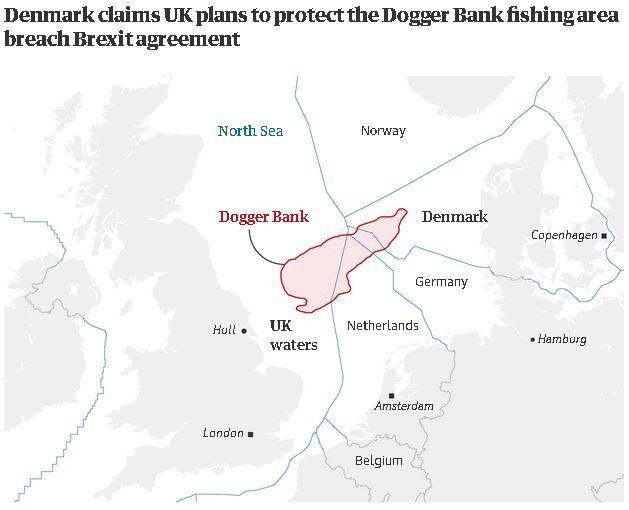 Between 2013 and 2020, Danish fishers landed catches worth 27m DKK (€3.6m, £3.05m) a year from bottom trawling in Dogger Bank, mostly sand eel, which is used on fish farms but is also an important source of food for puffins, kittiwakes and seals.

Germany and the Netherlands also have fishing interests in Dogger Bank, which environmentalists say has been overworked by trawls and dredges, causing a drastic decline in fish.

Environmentalists have welcomed the government’s decision to protect Dogger Bank, but said the UK needed to show the same efforts when it came to protecting fish targeted by British fishers.

“The UK is proposing a brave and good deal on the Dogger Bank,” said Irene Kingma, a Dutch marine biologist. “It’s also very easy … when it’s not your fisheries that you’re impacting.”

“The UK is being very progressive on all environmental issues as long as it’s not interfering with their own fishing interest,” she added. “They are good at [protecting] Dogger Bank, because its flatfish are fished by the Dutch, and they are good at the industrial fisheries [sandeel] because that’s fished by the Danish. But they are very much not willing to move on cod when it’s the Scottish fishing boats.”

The UK government rejects the claim it is in breach of the TCA, arguing it allows both sides to decide on regulatory measures. A spokesperson for the Department for Environment, Food and Rural Affairs said: “The UK is a global leader in the fight to protect our seas. As an independent coastal state the UK can decide on the regulatory measures which apply to fishing in our waters, which includes taking measures to follow scientific advice and protect our marine environment.”