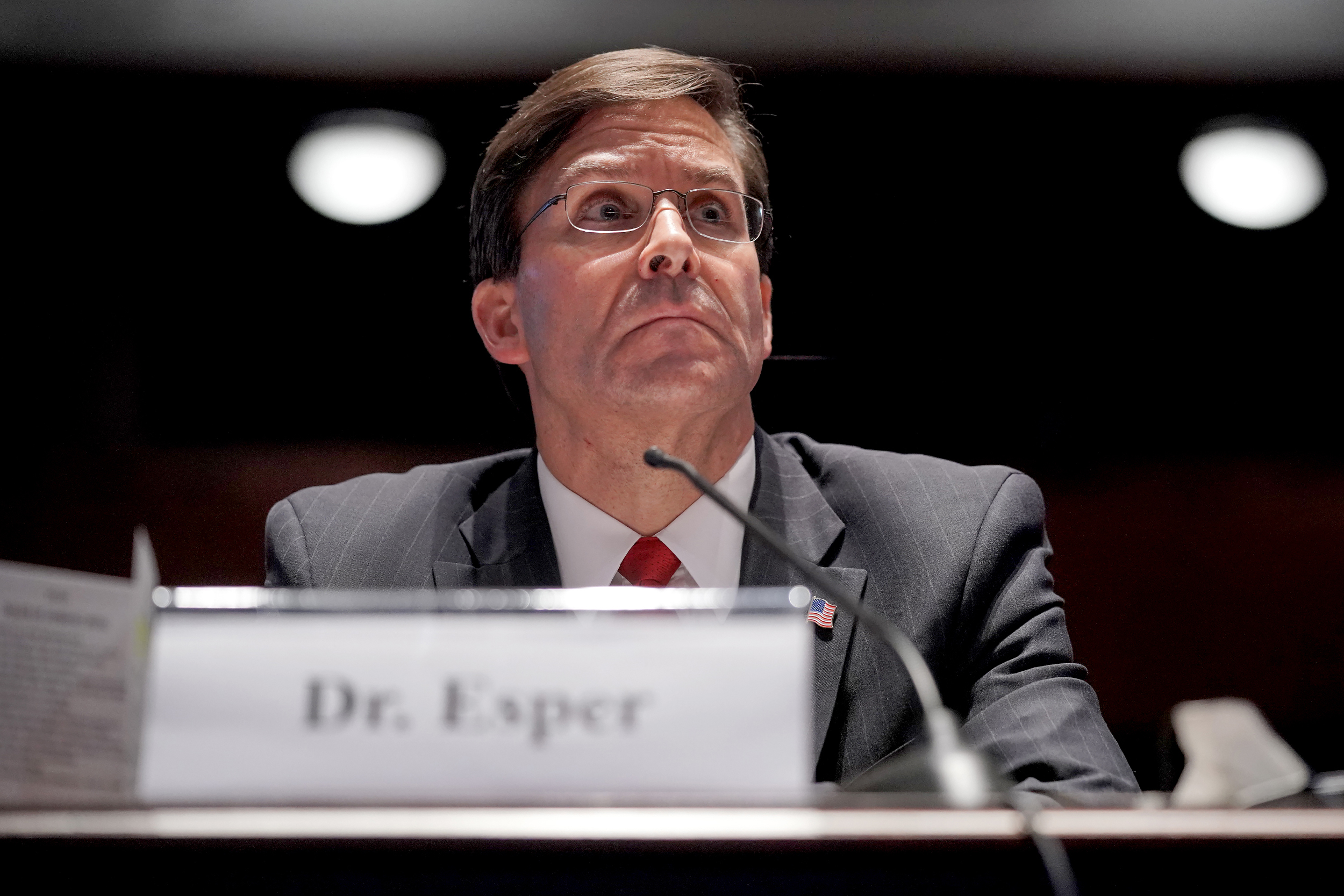 Esper also plans to help Congress draft legislation to strip military bases of Confederate names, which could further alienate him from Trump.

Defense Secretary Mark Esper has prepared a letter of resignation, according to three current defense officials.

It's not uncommon for Cabinet secretaries to prepare undated letters of resignation during a presidential transition, giving the commander in chief the chance to replace them for a second term. The president decides whether to accept the resignation letters, and the process usually occurs after the election results are clear.

But defense officials say Esper prepared his letter because he is one of the Cabinet officials long expected to be pushed out after the election.

As his tenure may be coming to an end, Esper is helping members of Congress draft legislation that will strip names of Confederate leaders from military bases in a move that could put him further at odds with President Donald Trump.

While Esper considered issuing a directive that would order the secretaries of the Army, Navy and Air Force to change the names in their respective services - an order that could be overturned by Trump, who has strongly opposed renaming bases - he now plans to work with Congress to put language in the annual National Defense Authorization Act (NDAA) so the name changes will be written into law.

This week Esper provided a written framework to Pentagon leaders for renaming installations, and possibly even ships and street names on bases, that honor Confederate generals or leaders, the officials said. For example, the framework suggests that the NDAA could say that military installations cannot be named after someone who has betrayed the U.S. or committed a felony, and instead must be named after people who have met certain criteria, like having earned a Medal of Honor or Silver Star, or achieving the rank of general.

“The speculation about potential resignations of Cabinet officials is a well-worn, D.C.-insider, post-election parlor game,” said Jonathan Hoffman, the assistant to the secretary of defense for public affairs, in a statement. "[Secretary Esper] continues to serve the nation as the secretary of defense at the pleasure of the president and is at the Pentagon today working on the irreversible implementation of the National Defense Strategy.”

“As is normal and expected, the department works with Congress to provide the administration’s concerns and views regarding proposed defense-related legislation - particularly when House and Senate versions of defense bills are being reconciled and finalized. This does not indicate support for previously proposed legislative language. Out of respect for the members of Congress who have sought technical assistance in good faith, we generally do not discuss these efforts.”

The NDAA, which outlines the military's budget and policies, is expected to be passed during the lame duck session of Congress in coming weeks, and Trump would have to sign it for it to become law.

As NBC News has previously reported, Esper has long been at odds with Trump. The two disagreed on the use of active-duty U.S. military to quell protests this summer.

Esper is also thinking about his legacy, said the two officials. He earned the nickname "Yesper" from lawmakers and White House officials for, in their view, his willingness to implement Trump's agenda without pushing back. "He cares about his legacy and prefers to be remembered as someone who was fired because he stood up to the president, rather than being remembered as 'Yesper,'" one defense official said.

Trump has denounced the idea of stripping Confederate names from bases several times. In June, he tweeted, "The United States of America trained and deployed our HEROES on these Hallowed Grounds, and won two World Wars. Therefore, my Administration will not even consider the renaming of these Magnificent and Fabled Military Installations."

"Our history as the Greatest Nation in the World will not be tampered with. Respect our Military!" Trump continued, calling the bases "part of a Great American Heritage."

A White House official said, "We don't comment on personnel matters or speculate on potential changes within the administration."

The current NDAA already includes language from both the House and Senate that may force Confederate names to be stripped. But the NDAA has not yet been finalized in formal conference between the two chambers, so how and when the names could change is still uncertain. But if the criteria Esper and Pentagon leaders are preparing are included in the NDAA, that would ensure current names are changed and Confederate leaders would not be memorialized in the future.

In July, Esper issued specific guidance on what flags may be displayed in military installations, omitting the Confederate flag from the list of flags permitted without explicitly banning it.
Add Comment