The original handwritten lyrics of David Bowie’s Starman are going up for auction with an estimated price of £30,000.

Omega Auctions said the lyrics sheet – which includes edits and additions by Bowie – is being sold by someone who acquired them in the 1980s. The lyrics were previously on display at the V&A’s David Bowie Is exhibition.

“David Bowie remains one of the most influential recording artists of all time and someone whose lasting influence on music is still being studied,” said Dan Hampson, the auction manager for Omega. 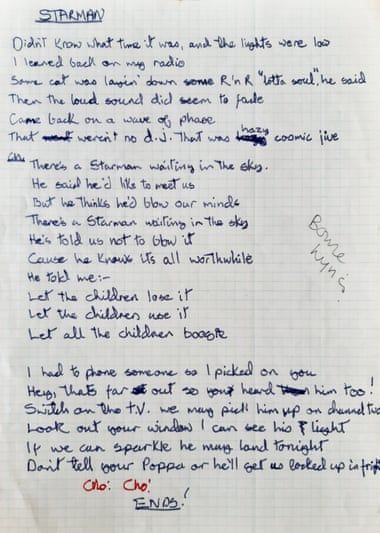 “The items that most excite our collectors are those that bring them closer to the stars, in this instance, the handwritten lyrics to a song which many would regard as a work of true genius. It’s a real privilege to see and to sell them.”

First released in 1972, the track was featured on Bowie’s fifth album The Rise and Fall of Ziggy Stardust and the Spiders from Mars. “Didn’t know what time it was, the lights were low,” Bowie opens on the track, with his Top of the Pops appearance thought to be his star-defining moment.

“My entire career, I’ve only really worked with the same subject matter. The trousers may change, but the actual words and subjects I’ve always chosen to write with are things to do with isolation, abandonment, fear and anxiety, all of the high points of one’s life,” he said in an interview in 2002.