The survey, commissioned by the Liberal Democrats, also shows one in 10 people plans to take out a loan to cover the cost of their gas and electricity bills.

Millions of people in the UK will not turn their heating on this winter because of rising energy bills, a survey suggests.

The poll, commissioned by the Liberal Democrats, showed 23% of adults plan to take this drastic move, rising to 27% for those with children at home.

The results also showed 23% would be forced to use credit cards to pay their bills - up to 33% for parents - while one in 10 will take out a loan to cover the higher costs.

It follows Friday's announcement from Ofgem that the energy price cap would rise by 80% come October, leading to the average household paying £3,549 a year for their gas and electricity.

The government is under growing pressure to announce further support to get households and businesses through the cost of living crisis.

Boris Johnson has insisted it is up to his successor to decide what action to take. But a Number 10 source said on Monday that the current PM may say something on the matter later this week.

There is still a week to go until the winner of the Conservative leadership contest is announced, and neither Liz Truss nor Rishi Sunak have given precise details of what they plan to do to tackle rising bills if they get the keys to Number 10.

Yesterday, reports suggested Ms Truss - who is the frontrunner in the contest and has previously dismissed the idea of giving "handouts" to people - is planning to cut VAT from 20% to 15%, alongside her pledges to reverse the National Insurance hike and pause green levies.

But there have been mixed messages from sources in her team over whether she would sign off on direct support to households or targeted support for the least well off.

Mr Sunak's team criticised the rumoured VAT cut as expensive and "incredibly regressive", with the former chancellor saying help with energy bills should be directed at low-income households and pensioners - delivered through the welfare system and winter fuel payments.

Director of the Institute for Fiscal Studies (IFS), Paul Johnson, also said the VAT cut would be "inappropriate", adding: "It made sense to have a temporary cut in VAT in the financial crisis because there was a huge drop in demand and a big recession without much in the way of inflation.

"It might reduce inflation temporarily, but it clearly increases it at the point at which the VAT cut is undone."

Environment minister and supporter of Mr Sunak, Victoria Prentis, told Sky News the government understood the price hike was "frightening", but insisted work was going on behind the scenes.

"The message from government is, yes, I know this has been difficult when the leadership election [is happening], but there will be a plan to help people through the heating problems that they will be suffering this winter," she said.

But Labour's shadow Treasury secretary, James Murray, said the public was "crying out" for action now.

He told Sky News: "That is what is missing from politics at the moment - the government is missing in action.

"Over the summer, Liz Truss and Rishi Sunak have said nothing which will really meet the scale of the problem people are going to be facing over the winter and we need a plan to help people get through the winter." 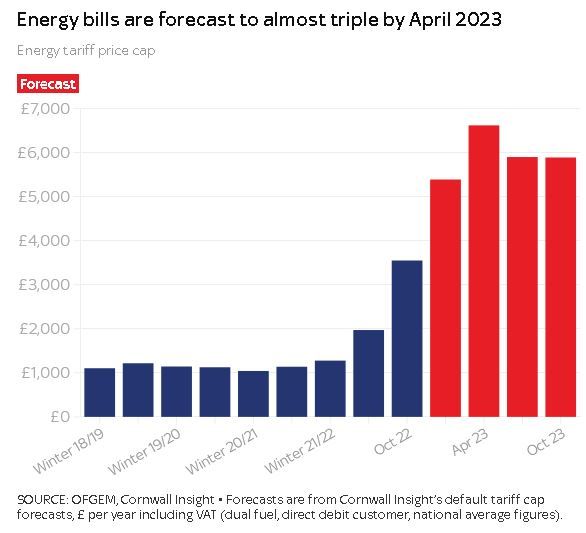 The Liberal Democrats, Labour and the SNP have all called for a freeze on the price cap, as well as additional support for the least well-off households.

Lib Dem MP and spokeswoman Christine Jardine said people would be making "heartbreaking decisions" this winter, such as keeping the heating off, because the government has "failed to save them".

She added: "It is a national scandal that parents are having to choose between heating their homes and feeding their children. It shouldn't be like this.

"Britain is on the brink of the worst cost of living crisis in a century and yet still Liz Truss and Rishi Sunak will not scrap the energy price rise. It is clear energy prices must not be allowed to rise in October."

But a government spokesperson said its £37bn package of help for households means direct support would "continue to reach people's pockets in the weeks and months ahead, targeted at those who need it most like low-income households, pensioners and those with disabilities".

They added: "The Civil Service is also making the appropriate preparations in order to ensure that any additional support or commitments on cost of living can be delivered as quickly as possible when the new prime minister is in place."

Labour is also calling for a scheme to insulate 19 million homes across the UK in order to cut household bills.

The party claims the number of homes being insulated is at its lowest level in four years, putting the blame squarely at the door of Number 10.

Shadow minister for climate change Kerry McCarthy said: "The energy price cap has just soared to record levels and people are terrified of what that means for their bills this winter.

"The government should have been working round the clock to insulate homes and ensure as many households as possible benefit from lower bills. Its failure to do so despite repeated warnings risks leaving millions out in the cold."

The concern was echoed by Mike Childs, head of policy at Friends of the Earth, who called for the next prime minister to make energy efficiency a "top priority".

He said: "The poor level of insulation in UK homes is a shocking testament to the government's failure to take this issue seriously.

"This winter millions of households will be paying sky high bills for heat that will simply escape through roofs, walls and draughty windows and doors.

"The next prime minister must make energy efficiency a top priority and commit to funding a free, street-by-street home insulation programme - focusing on those most in need."

A spokesman from the Department for Business, Energy and Industrial Strategy said the government was investing £6.6bn to improve energy efficiency across the country, "with the majority of our support targeting those on low-income and vulnerable households".

He added: "Huge progress has already been made, with the number of homes with an energy efficiency rating of C or above at 46% and rising, up from just 14% in 2010.

"This is benefiting tens of thousands of homes and delivering average savings of £300 a year on energy bills."

Meanwhile, a YouGov survey commissioned by The Times newspaper showed almost half of Tory voters favoured renationalising the energy industry.

According to the poll, 47% backed the idea, with the figure rising to 53% in traditional Red Wall seats in the North East of England and the Midlands.

And the results will make tough reading for Ms Truss, with just 13% of Tory voters having faith in her to bring down record high inflation, compared to 21% for Mr Sunak and 31% for Labour leader Sir Keir Starmer.