As fuel prices rise and pay rates stay the same, a driver and labour rights leader is fighting increasing precarity.

Each weekday morning, the first task of Park Jung-hoon’s day is lugging cases of bottled water out of a freezer. With the high humidity and temperatures nearing 30 degrees Celsius (86 degrees Fahrenheit), the bottles quickly become coated in condensation as he carries them out of his basement office and loads them onto the back of his motorcycle. He then takes them to coolers set up throughout Seoul where fellow food delivery drivers can stop to grab a cold drink.

South Korea is in the midst of a sweltering, record-setting summer that has spurred an uptick in food orders as more people choose to remain in their air-conditioned offices and apartments instead of venturing out for meals. Adding to the discomfort are the helmets and protective gear drivers wear for safety as they navigate congested streets while making deliveries, often climbing staircases while carrying bags of food.

While the ice water can provide a brief respite, drivers are grappling with an even fiercer adversary than the scorching weather: in March, in the early stages of the war in Ukraine, petrol prices hit an eight-year high of 1,904 Korean won ($1.40) per litre and in early July stood at 2,117 won ($1.60), up from 1,628 won ($1.20) at the same time the previous year.

Drivers are paid per delivery and fees range from 2,500 ($1.88) to 7,000 ($5.30) won. The fee for each delivery is determined by an algorithm, factoring in the distance, time of day and weather. For example, drivers can earn more during a rainstorm when traffic is backed up, but companies have not increased rates to account for the recent rise in petrol prices.

As fuel prices have climbed, drivers are taking home less, Park says. He now dreads having to fill up his motorbike. “When a gas station attendant asked me how many litres I wanted to put in, my mouth trembled. After refuelling, I saw a few drops of gas fall on the ground, and I felt like it wasn’t just gas. It was my blood, sweat and tears,” says the 37-year-old.

Park stresses that for drivers, higher fuel prices and general increases in living costs are not just a matter of personal finance but of public safety. 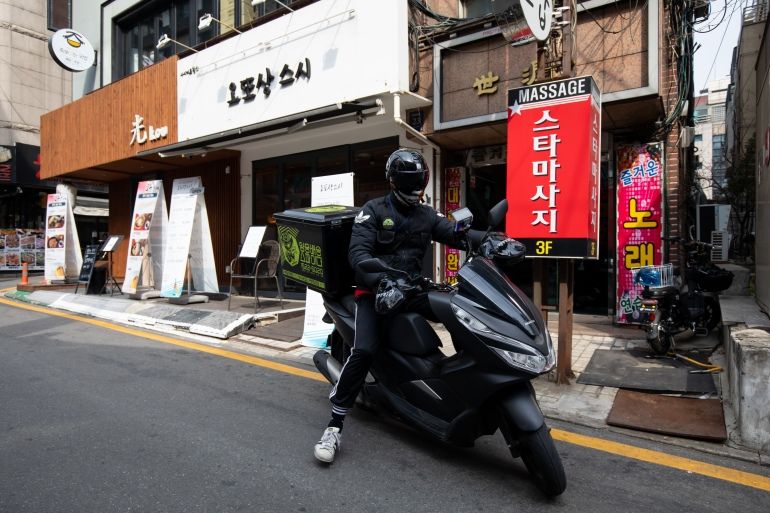 ‘When workers shed blood, nothing happens’

Rising fuel prices mean working longer for the same money, leading drivers to rush and, literally speaking, cut corners to save time. Since drivers are paid per delivery, many will drive faster to squeeze more deliveries into their day. And since they are trying to save both time and money, some will opt to eat quick food like rice balls bought at convenience stores instead of sitting down for proper meals. Some reduce their intake of fluids to avoid time-consuming bathroom breaks.

Park says these factors make driving in the city more dangerous. “The streets have become a battlefield,” says Park, who in addition to working as a driver operates Rider Union, an association of roughly 1,000 food delivery drivers, ranging from students or entrepreneurs who deliver part-time to others who work full-time.

Park says he has seen drivers who have had accidents continue making deliveries even if they are injured in order to pay bills as they have no other source of income. Under South Korean law, delivery drivers and other gig economy workers are classified as independent contractors, not as employees of the companies they deliver for, so they have no legal minimum wage, paid holiday time and are not legally entitled to accident insurance provided by the company.

Park says drivers are not earning their fair share of this growth. “When we’re making deliveries, if the food spills, the customers and companies get so upset, but when workers shed blood, nothing happens,” says Park, who is soft-spoken and unassuming, and wears a white polo shirt and khakis on a July morning when the temperature had breached 30C by 10am.

Rising energy prices are one part of a broader cost-of-living crisis in South Korea, which is only making life more precarious for groups like food delivery drivers. Inflation hit a 24-year high in June, with food and housing prices rising beyond many families’ budgets.

President Yoon Suk-yeol said in a government meeting in early July that the government is working on solutions to ease household burdens on necessities such as energy and food, particularly by waiving or reducing tariffs on imports.

Yoon called the task a “matter of life and death,” adding “when the economy worsens, those hit hardest are regular people and vulnerable groups”. 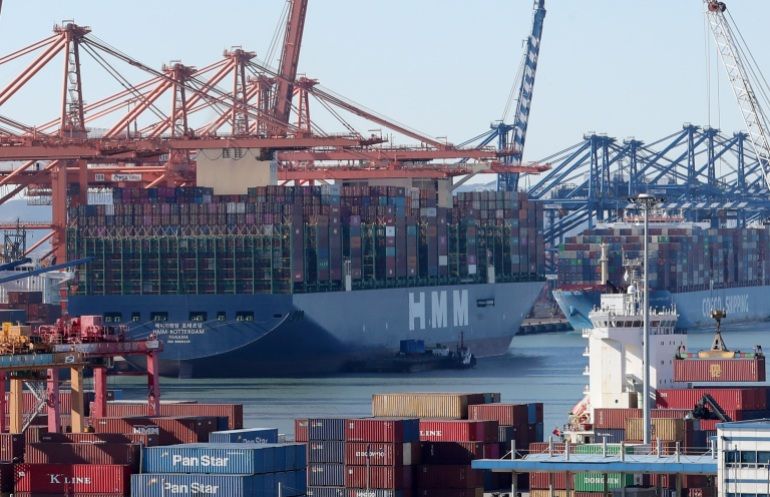 Park was born into a working-class family in Busan, a major port city on South Korea’s southeastern coast. As a child, he lived in Beomil-dong, a low-income neighbourhood of narrow alleyways near the city’s massive commercial port. “Economically it was difficult, but otherwise it was a happy place to live,” says Park, who has fond memories of the neighbourhood’s close-knit community.

He became aware of his country’s sharp inequality as from his low-slung neighbourhood he watched glass and concrete skyscrapers sprout across the skyline while the bustling port came to occupy more and more of the waterfront, pushing fishers and revellers further down the coast.

“I got a strong impression of our country’s asset inequality, that certain people own things and can make money from that, while most people need to try to accumulate assets by working. And that’s much more difficult,” Park says, speaking in Rider Union’s basement office.

In his youth, he found refuge in novels that explored the themes of inequality and unrest. “Taebaek Mountain Range,” a trio of historical novels by Jo Jung-rae set during Japan’s colonial occupation of Korea, made a particular impression. The story details the intense conflict between peasants and landowners at a time when a large portion of Korea’s rural workforce was made to grow rice that was exported to Japan.

Those stories played a role in inspiring him to speak out for workers. He studied politics at university and became active in campus causes, taking part in student debates and advocating for students with disabilities. After graduating and moving to Seoul, he took a job as a delivery driver for McDonald’s because it came with health insurance and because the flexible working hours allowed him to take part in protests and other forms of activism. 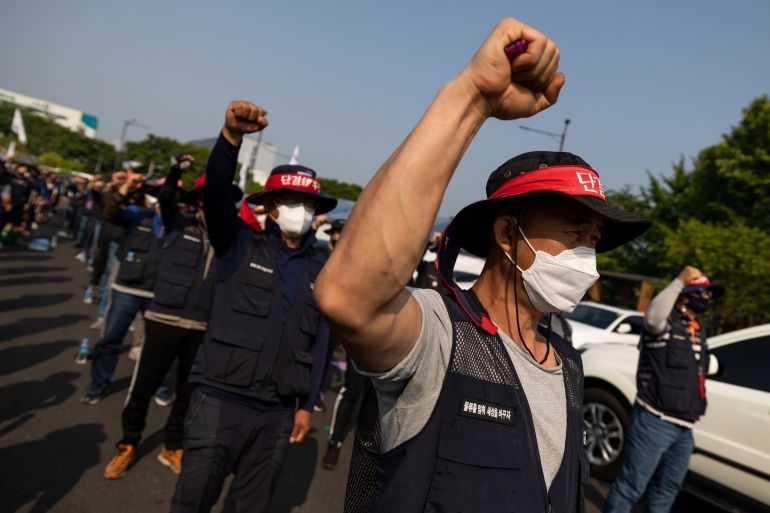 Early in the summer, truck drivers in South Korea held protests in response to higher fuel prices. Truckers, like food delivery drivers, are paid per delivery. The protest affected major companies, and the government agreed to the truckers’ demands for guaranteed minimum freight rates

Over the years, Park’s activism has come to take up more of his time. He delivers on weekends for different food delivery platforms and spends weekdays in Rider Union’s office on a sidestreet in western Seoul. His days are filled with meetings with delivery drivers who come to share grievances and seek advice related to disputes with their employers.

In early July he hosted Ryu Ho-jeong, a prominent left-wing politician who at age 29 is the youngest lawmaker in the country. She is pushing for legislation that would offer such workers more robust protections, such as legislation guaranteeing higher delivery fees and establishing a hotline drivers can use to report abuse. After meeting with Park, Ryu issued a statement on her Facebook page that said, “In the end, platform workers are the workers that make our neighbourhoods run.”

Park and Ryu are both calling on companies to guarantee drivers minimum delivery fees that are commensurate with the rising cost of living and the demanding nature of their work.

The cost-of-living crisis is creating more visible reminders of how South Korean society needs labour to function. Truck drivers held a nationwide strike earlier this summer in response to higher fuel prices. Like delivery drivers, the truckers receive payments per delivery and their net earnings are vulnerable to increases in energy prices.

The strike dominated headlines for days as it threatened to cause shortages of goods on store shelves, and directly affected some of the country’s largest companies, like steelmaker POSCO and major automaker Hyundai Motor Company. In less than one week the strike caused $1.2bn in losses to companies. In the end, the truckers’ action was successful in that after several days off the roads, the government acceded to the strikers’ demands for guaranteed minimum freight rates.

For now, Park isn’t planning that kind of large-scale strike as he is not comfortable with those kinds of confrontational tactics. He faces a challenging task in attempting to organise food delivery drivers, many of whom work for more than one company. These workers tend to spend much of their working hours on their own, using their smartphones to find their next gig and rarely interacting with other drivers, so Park’s first task is often convincing them that they have shared interests.

“It’s a matter of persuasion and education,” he says. “A lot of platform workers don’t have time to learn what their rights are under the law, and how they could be improved.”

For example, as of January this year, delivery drivers became eligible for national employment insurance, but Park says some workers are still unaware that they are entitled to such support.

Park looks forward to the end of the steamy summer weather when at least his morning duty of delivering ice water will no longer be necessary. However, he knows that once the heat passes, it won’t be long until winter brings frigid winds and streets slippery with ice. During the summer, he dreads getting orders for sushi, while in winter he has to brace for customer complaints if the food arrives cold. An evergreen headache is pizza, which, regardless of the weather is difficult to keep flat and awkward to carry through tight spaces like building hallways.

Park got married earlier this year and says he and his wife, a former union official who is currently working as a house cleaner, are considering whether to have children. He worries that his punishing work schedule would not leave him with sufficient time for childcare duties. South Korea is one of the most expensive countries in the world to raise children, and the couple is factoring rising living costs into their decision.

For now, he hopes the cost-of-living crisis can lead to a broader awareness of platform workers’ plight and will continue working to organise drivers. “Being a part of this movement is what brings me joy,” he says.