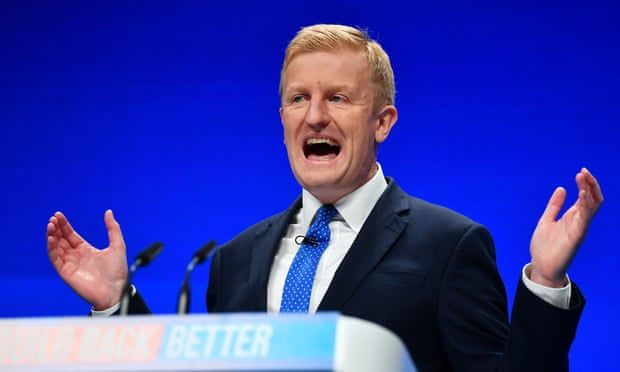 The Tory party conference has opened with a battle cry against “woke aggression”, with cabinet ministers decrying “cancel culture” and expected to rail against leftwing bias at the BBC.

Oliver Dowden, the new Conservative party co-chair, set the tone for the conference as he hit out at people who see Britain as “dominated by privilege and oppression that should view its values and history with shame”.

He criticised cancel culture, which he described as “bullying and haranguing of individuals” for their views, and claimed Labour “has got woke running through it like a stick of Brighton rock”.

“Anyone who dares resist this argument – anyone who objects to this woke aggression – is branded as instigating culture wars,” he said during a speech in Manchester. He voiced support for Kemi Badenoch, the minister who is seen as “anti-woke” and has spoken out against schools supporting “the anti-capitalist Black Lives Matter group” or uncritically teaching “political race theory”.

Dowden’s words suggest the Conservatives are trying to draw a dividing line between themselves and Labour before the next election by attempting to associate the opposition party with so-called woke issues and identity politics.

In a sign that Dowden, formerly the culture secretary, is expected to be an anti-woke attack dog in his new role as chair, he told members: “That is why we must be robust in empowering [institutions] to stand up to this bullying. To defend the interests of taxpayers who ultimately fund them. And to keep our national heroes like Nelson, Gladstone and Churchill in the places of honour they deserve.”

The same theme of defending institutions and sectors against leftwing criticism ran through other speeches and fringe events. Nadine Dorries, the new culture secretary, is expected to warn against leftwing bias at the BBC and tell the broadcaster “what is expected of it if it wants to keep the licence fee”.

The new foreign secretary, Liz Truss, one of the most popular cabinet ministers, said the Conservative party had to “reject the zero-sum game of identity politics, we reject the illiberalism of cancel culture, and we reject the soft bigotry of low expectations that holds so many people back”.

Speaking at a fringe meeting about her role as women and equalities minister, Truss said there should not be a separate cabinet role for that function. “I fundamentally don’t agree with identity politics,” she told the Telegraph event.

“If you have a separate women’s ministry, you’re looking at people through the lens of being women. The thing I care about … is your ideas, your talent, your work ethic. I don’t care whether you’re a woman or a man, and that’s the approach I take.”

Truss and Dowden raised the case of the Labour MP Rosie Duffield, who after being accused by party activists of transphobia said she was concerned about attending the Labour conference.

“She is right that women have cervixes, but more than that, she’s also right to be able to express her view, and I’m a huge believer in free speech,” Truss said. “And I think when we try and sort of brush things under the carpet and can’t have an honest, honest and sensible debate, I think that’s a huge problem for British politics.”

Another Tory MP, Chris Loder, spoke out against what he saw as people “pushing a vegetarian or vegan agenda who think it better to ship avocados 5,000 miles for breakfast rather than to have milk or beef from the farm around the corner”. Delegates at a Young Conservative fringe made speeches decrying “wokeism in our universities”.

However, Frank Luntz, the rightwing US pollster, had a warning for Tories at another fringe event, saying they would regret engaging in culture wars. “I’m scared to death of woke. But not just of woke coming to the UK the way that it’s come to America, because it’s destroying our universities, media, entertainment and all the things that have an impact on how we think. But I’m also afraid of how you all use it,” he said.

“Because you can win an election with it, I promise you. If you want to run a woke campaign, the public will be on your side. But you will destroy your country in the process … I cannot stand what’s going on in academia in this country right now, but don’t play into it, because you’ll regret it in the end.”
Add Comment