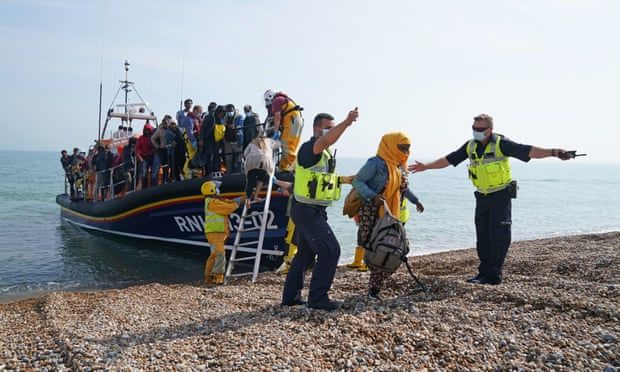 Hundreds of people have arrived in the UK after crossing the Channel, as several charities said the current humanitarian crisis in Afghanistan showed why people risk their lives to flee.

It followed a first day of landings in more than two weeks on Sunday, after a run of bad weather put a halt to the crossings. A Home Office source said reports of 1,000 migrants entering the UK across the Channel in a single day is an exaggeration, and believed the figure will be between 800 and 850.

The government is not expected to confirm any figures before Tuesday morning but the previous record daily figure was 828 set on 21 August.

The lifeboat charity RNLI is understood to have experienced an especially busy day in the south-east of England while assisting Border Force with rescues.

Tim Naor Hilton, the chief executive of Refugee Action, said: “Refugees feel there is little choice other than to cross the Channel in flimsy boats because the government refuses to open up alternative routes to safety. 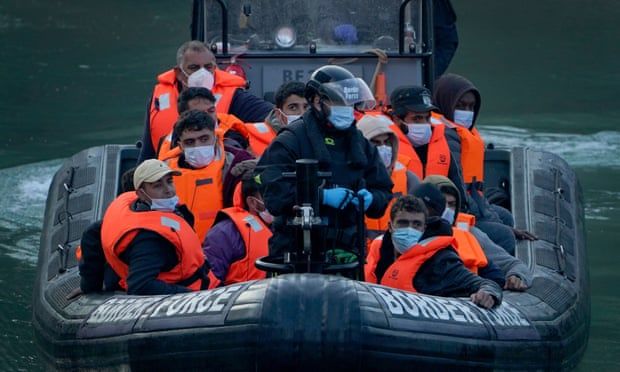 A group of people are brought in to Dover, Kent, by Border Force officers

“The shocking images we’ve seen in Afghanistan has shown what forces people to leave their country. That same terror is happening in other countries such as Eritrea, Iran, Sudan and elsewhere.”

A packed lifeboat was among those pictured arriving on a beach in Dungeness, Kent, on Monday, with officials seen leading its passengers away.

One woman was seen desperately clinging on to a small baby who was strapped to her body.

Enver Solomon, chief executive of the Refugee Council, said: “The government needs to recognise that while there is war, persecution and violence, people will be forced to take dangerous journeys to seek safety.

“We are talking about ordinary men, women and children who are forced to flee their home through no fault of their own. The odds are stacked against them but they struggle on to survive.”

Sunday was the first time in more than two weeks there have been small boat crossings of the Channel because of prior bad weather, with 158 people, including five children, arriving in Dover from four boats.

Those arrivals brought the total number of people who have crossed to the UK aboard small boats this year to more than 12,500 before Monday’s landings, according to data compiled by the PA news agency.

Solomon added: “This government must change its approach and instead of seeking to punish or push away people seeking safety because of the type of journey they have made to the UK, they must create and commit to more safe routes.

“As a country we can save lives and empower people, who have already been through so much, to give back to the communities that welcome them.”

Crossings in 2021 have already far surpassed last year’s total of 8,417 and the tally continues to rise on fair weather days. The UK continues to see far fewer boat arrivals and asylum claims than many of its European counterparts.

Dan O’Mahoney, clandestine Channel threat commander at the Home Office, said: “This unacceptable rise in dangerous crossings is being driven by criminal gangs and a surge in illegal migration across Europe.

“We’re determined to target the criminals at every level, so far we have secured nearly 300 arrests, 65 convictions and prevented more than 10,000 migrant attempts.”

He added that the government’s “new plan for immigration is the only credible way to fix the broken asylum system”.

In parliament on Monday, Boris Johnson said the home secretary, Priti Patel, was “working around the clock” to ensure France blocks migrants from reaching Britain.

The prime minister said: “A large number of people want to come to this country, and we are doing everything we can to encourage the French to do the necessary and impede their passage.”