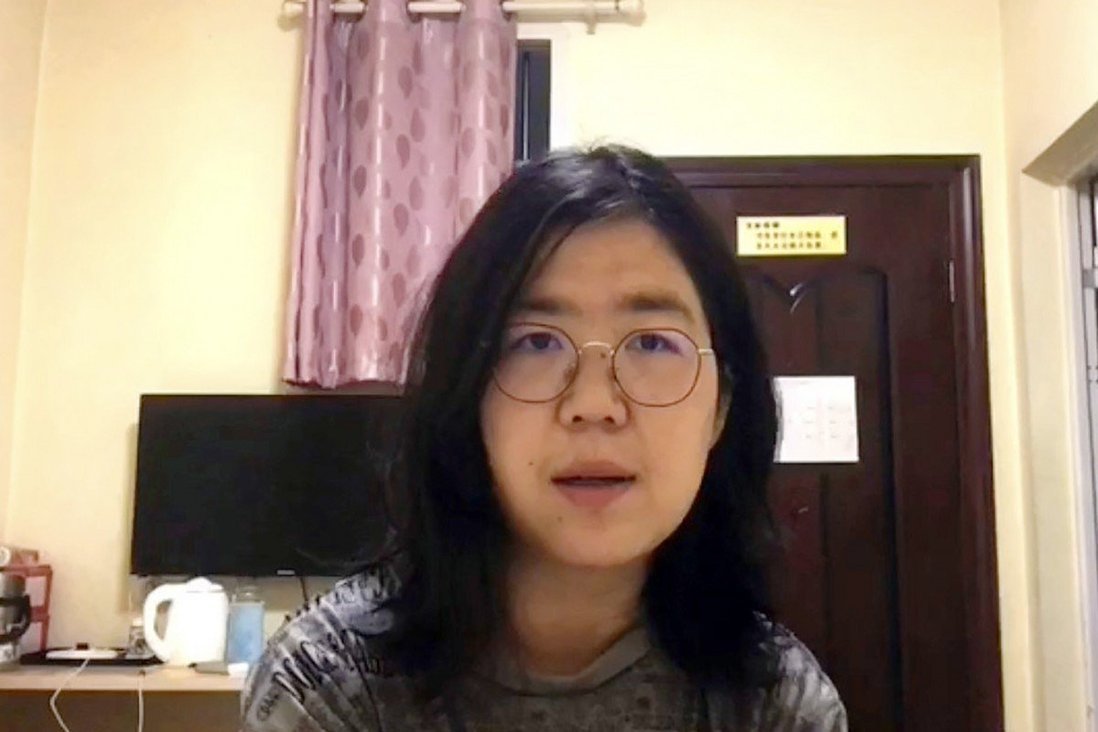 Family fears for Zhang’s health amid hunger strike and force-feeding. Shanghai court to hear case later this month against the former lawyer

A Chinese citizen journalist on a hunger strike in protest over her arrest will face trial in Shanghai this month as her health deteriorates and she is force-fed, according to sources with knowledge of her condition.

Zhang Zhan, a 37-year-old former lawyer who reported on the coronavirus epidemic in the central Chinese city of Wuhan earlier this year, will go on trial in Shanghai Pudong New Area People’s Court on December 28.

A court document sent to Zhang’s lawyers on Wednesday said Zhang was charged with “picking quarrels and provoking trouble” – an apparent reference for her reporting activities in Wuhan 10 months ago Zhang is being held in a detention centre in Pudong and went on the hunger strike soon after her arrest in mid-May to protest against her “unlawful detention”, according to the sources, who were warned not to speak to the media.

She is the first “citizen journalist” to face trial for reporting on the pandemic in Wuhan and has refused to admit any wrongdoing.

“[Zhang] refused to plead guilty and insisted that, contrary to the accusations of prosecutors, her reporting in Wuhan was based on facts from people [in Wuhan] and not fabricated,” one of the sources said.

The source said Zhang was force-fed three times a day through a nasal tube and she was restrained physically from removing it.

Another source said Zhang’s family and her lawyers had urged her to resume eating out of health concerns, but the activist refused.

“She told the lawyers that every day had been torture and she was not sure if she would be able to make it if she was sentenced to two to three years as her health continues to worsen,” the source said, adding that Zhang needed painkillers to cope with the effects of the nasal feeding.

The sources said her lawyers had applied to live stream the trial as an effort to ensure transparency of the proceedings.

Chinese courts have live-streamed some hearings since 2016 to promote procedural transparency in the legal system but all politically sensitive cases are still heard behind closed doors.

According to court documents, prosecutors have recommended the maximum sentence of five years in prison for Zhang, citing her previous offences as justification.

In August 2018, she was given a police warning for allegedly inciting subversion. She was also detained in April and November 2019 for “picking quarrels” and “disrupting public order”.

In February, Zhang went to Wuhan, then the epicentre of the coronavirus, and live-streamed reports on social media platforms, including Twitter and YouTube, which are both blocked in China.

She also wrote an article critical of the official response to the outbreak, accusing authorities of infringing people’s rights and covering up the severity of the conditions.

“The government isolates individuals from the outside world in the name of treatment. In the name of maintaining stability, the number of infections and deaths is covered up. The media is kept under control in the name of ‘positive energy’,” Zhang wrote in the article posted on Twitter on February 16.

“[The authorities] are coercively and violently ordering and depriving people of their basic human and property rights.”

Zhang also spoke out against censorship by the mainstream media.

She was arrested on May 15 and was officially charged three months later.

Three other citizen journalists – Chen Qiushi, Li Zehua and Fang Bin – have also been detained for their coverage of the pandemic in Wuhan.

Chen, a former lawyer, has been held since September under “supervised surveillance at a designated residence” in the eastern city of Qingdao, Shandong province. Li reappeared on Chinese social media in late April but the fate of Fang, a Wuhan resident and high-profile blogger, remains unknown.
Add Comment