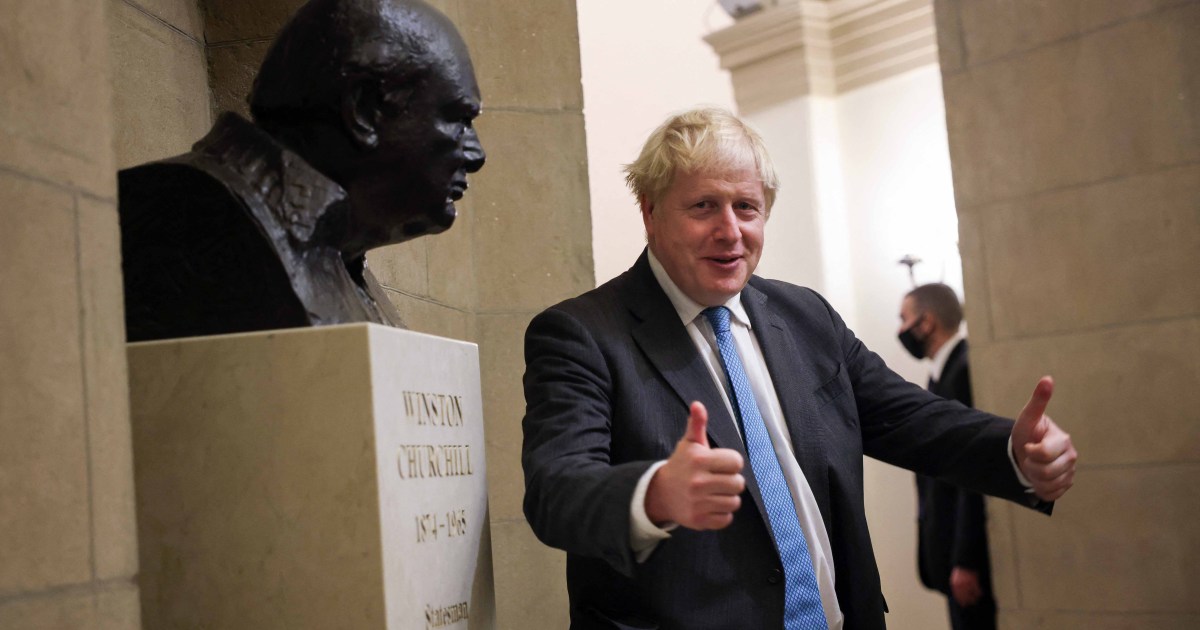 Churchill, Johnson and the farcical nostalgia for empire

Churchill’s vast historical record has long been misused, but current attempts to do so are particularly egregious.

I was hunkered down with fiction and history books early in the pandemic, when I stumbled on The Churchill Factor, an entertaining tale of dramatised history, written by British Prime Minister Boris Johnson to educate young minds about their English hero and remind the elders of British greatness.

Johnson, who likes to be seen as heir to Churchill, used the “spirited” 2014 bestseller to storm the national political arena, championing the cause of Brexit, joining the Conservative government as foreign secretary before finally replacing Theresa May as prime minister in 2019.

To suit his political ambition, Johnson may have offered a “barbarically simplified” Churchill take on Europe, in the words of American-Dutch historian Felix Klos, who wrote, Churchill’s Last Stand: The Struggle to Unite Europe.

Actually, Johnson did what the old sot himself said albeit half-jokingly, “give me the facts … and I will twist them the way I want to suit my argument”. Here, the facts are mere citations, and Churchill’s 43 books in 72 volumes, in addition to his countless articles, speeches and letters, provide plenty of, well, citations to choose from at will.

Johnson, who vows in his book to play the “devil’s advocate” from the outset, does not shy away from recalling a few of Churchill’s despicable racist beliefs, reckless decisions and wrong-headed policies, but he is quick to dismiss them with convoluted counter-arguments and linguistic acrobatics that he learned studying the classics at Oxford. He calls them “unpasteurised” Churchill.

For Boris, Churchill’s many “jolly little wars” in the colonies pale in comparison with his feat of “saving civilisation” during World War II, which has been idolised and popularised in countless books, articles, films, etc. The point being, one does not have to like Churchill to find him utterly fascinating, as I have.

As a self-appointed authority on b******t, I could easily detect the humbug in every other page, but as a student of British European history, I was unable to grasp the full extent of Johnson’s “barbaric simplification”, not until I read Geoffrey Wheatcroft’s new book, Churchill’s Shadow.

The British historian and journalist outlines a prosecutor’s case against Churchill, gathering and examining the evidence with forensic precision and highlighting some damning eye-witness accounts by those who knew him best, all of which culminates in a well-documented indictment of Johnson’s hero.

Wheatcroft surveys Churchill’s indifference to human suffering since he first served as a young officer hopping from Asia to Africa, his utter failure as the head of the British navy in World War I, and his opposition as the secretary of state for the colonies to all Indigenous self-determination and democracy.

Most pointedly, Wheatcroft trounces the prime minister’s wartime record in World War II, for which Churchill is so revered, ridicules his passion and pursuit for what was obviously a one-sided “special relationship” with the United States, and rubs his nose in the loss of the empire he so cherished.

He zeros in on Churchill’s “unpasteurised” belief in the myth of “racial superiority” of the Anglo-Saxon white race, pointing out, for example, that he advocated for the Tories to use the slogan “Keep England White” in the 1950s.

Wheatcroft argues that Churchill’s support for Zionism was driven by a combination of British imperialism, European colonialism, and “racial superiority”. Churchill believed the Palestinians should not be entrusted with their homeland, and the Jews are “a higher-grade race” than the Arabs.

Paradoxically, according to Wheatcroft, Churchill’s victory over the horrific Nazis who killed millions of Jews made the language he used in support of Zionism intolerable. That is perhaps overly optimistic.

At any rate, Churchill who had considered the establishment of a strong, free Jewish state of “immense advantage to the British Empire”, eagerly supported the Balfour Declaration in favour of such an entity in 1917 as a cabinet member.

For the record, and according to Churchill’s own son and grandson in their co-authored book, The Six Day War, “Britain sought to arouse World Jewry, and in particular Russian and American Jewry” to gain their support for the fight against the Central Powers (the German and Austro-Hungarian empires) in World War I. And it was in this pursuit that the Balfour Declaration was made public.

Admittedly, Churchill, who was awarded the Nobel Prize in Literature in 1953, was an incredible orator and excellent rhetorician, who brilliantly and courageously “mobilised the English language and sent it to battle”, giving some of the most inspiring speeches ever made or heard.

His famous “never was so much owed by so many to so few” speech, reflecting the Royal Air Force (RAF) heroic defence of British civilians against Nazi bombardments, is indeed quite memorable.

Alas, the reality is messier and more complicated than any speech. Under Churchill’s leadership, the RAF was rather ineffective against the Nazi war machine, but did prove useful in “disciplining the empire” by bombing rebellious communities in Afghanistan, India, Iraq and Palestine throughout the first half of the 20th century.

In short, Wheatcroft’s 640-page book is “the best single indictment volume of Churchill yet written” to quote a New York Times review, where Churchill comes across as a greedy and cruel person, an opportunistic politician, racist imperialist and an impulsive failed strategist.

But it is more than that: It is a damning critique of the misuse of Churchill’s record since before his death, by British, American and Israeli politicians and its consequences for the rest of the world.

Although he does not spell it out, Wheatcroft’s treatise is a teardown of Johnson’s “trite” biography. In an article titled, “Johnson as Churchill? History really does repeat as farce”, Wheatcroft does not hide his disdain for the current British prime minister’s attempts to draw an equivalence between himself and the man he promotes as the saviour of Britain.

But the farce is by no means limited to Johnson. The British right has also resurrected Churchill’s memory, often speaking of the European Union as if it were Nazi Germany.

Indeed, Churchill could be many things to many people, anything to anyone. Wheatcroft recounts for example, how John F Kennedy, Fidel Castro, Menachem Begin, Yasser Arafat and countless others were disposed to compare themselves with Churchill since before his death.

But it is in the United States, where Churchill proved a warped inspiration, especially for racists and warmongers during and after the Cold War.

The neoconservative movement embraced him as its historic guru and the “prophet of the Cold War”, while its mouthpiece, The Weekly Standard, named him “the man of the century”.

Long considered an honorary founder of the state of Israel, Churchill has been repeatedly cited by Israeli colonists to draw (false) equivalency between Nazi Germany and their Middle East foes, such as Egypt’s Gamal Abdel Nasser, Iraq’s Saddam Hussein, Palestine’s Yasser Arafat, or Iran’s Ali Khamenei.

These Churchillians reject any geopolitical compromise as an evil appeasement along the lines of British Prime Minister Neville Chamberlain’s “appeasement” of Adolf Hitler in the late 1930s.

Churchill himself would later remark that sometimes appeasement, especially one from a position of strength, is the best guarantor of peace. The Soviet Union, for example, collapsed not because of a war, but rather because of a degree of appeasement by the West which allowed it to implode under the pressure of its own contradictions and inadequacies.

Wheatcroft may be right about Churchill’s wrongs, or about his heirs on the right and left. But the mindset that underpinned Churchill’s support for Zionism is very much still tolerated where it counts, in Britain, the United States and Israel. As the signs of a new Cold War multiply and as the chances of a renewed Iran nuclear deal falter, the misuse of Churchill and the abuse of appeasement are back in fashion. And so is the racism that underlined his views about empire, Islam, human rights and immigration.