Buyout funds are set to extend a record spending spree in Asia to the rest of the year but they will be mostly seeking deals outside China, where concerns about the economy are likely to outweigh any easing of a regulatory crackdown, dealmakers said.

Private equity mergers and acquisitions (M&A) activity in Asia, not including Japan, posted a record start to the year with $167.4 billion spent since January 1 in markets such as Australia, according to data from Dealogic.

Buyouts in China, Asia's biggest market for deals, however, slowed sharply in 2022, as the two-month Shanghai lockdown and other coronavirus-related restrictions in many parts of the country hurt the economy and brought potential transactions to a grinding halt.

Acquisitions backed by financial sponsors of Chinese assets totalled just $1.5 billion this year, less than a tenth of the value in the same period last year, Dealogic data showed.

A sluggish deals market in China could impact private equity funds' investment returns and prompt them to double down on M&A elsewhere, dealmakers said. Funds in the region are already sitting on a record $642 billion worth of unspent cash, or 'dry powder', according to data provider Preqin.

"Significant macroeconomic, geopolitical and pandemic-related headwinds still remain as far as China is concerned, which may continue to dampen sentiment for pursuing China investments at least in the immediate future," said Steven Tran, a partner at law firm Mayer Brown.

The record buyout deal value, however, suggested that some APAC-focused funds may be reallocating more of their dry powder away from China and redirecting their investment activities to other parts of the region, he said. 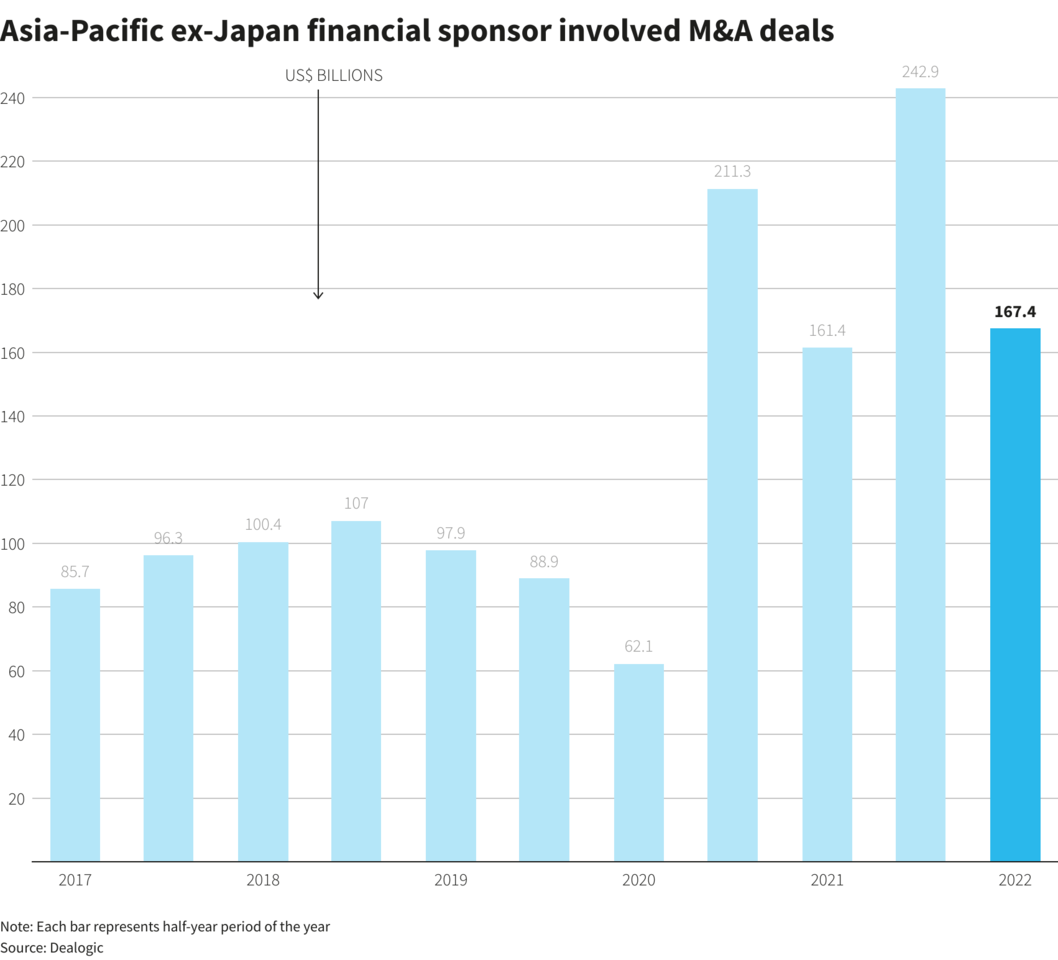 Despite signs that Chinese regulators could be easing curbs imposed on business sectors including technology, dealmakers don't expect to see any immediate investment surge in the country.
China's central leadership has given Ant Group a tentative green light to revive its IPO, Reuters reported last week.

"I don't think they (policy changes) will result in a major rebound of private equity investment, as most investments previously were speculative rather than value investments," said Richard Ji, chief investment officer of All-Stars Investment.

"However, right now China's quality assets are greatly undervalued. A U-turn in regulation will reduce uncertainty and discounts in assets, which is conducive to value investments," said Ji, who is also the managing partner of the firm which focuses on tech and consumer sectors.

Though China has been quiet on the deals front, new private equity capital raising in Asia has hit $30.4 billion so far this year, according to Preqin.

Big deals this year include an unsolicited near-$15 billion bid by a group led by KKR & Co (KKR.N) for Australia's Ramsay Health Care Ltd (RHC.AX) in April - this year's biggest PE-backed takeover in Asia.

A number of funds are also looking to bid for Hong Kong telecoms provider HKBN Ltd (1310.HK) as its private equity investors TPG and MBK seek to exit, said three people familiar with the situation, who declined to be identified as the information is not public.

Market jitters have also led some PE firms to seek buyers for their portfolio companies that were originally aiming for an IPO, said Samson Lo, Co-head of Asia Pacific M&A at UBS.

"Private equity firms are still enjoying a lot of capital and any deal in any sector these days would attract more than 10 private equity bidders in the first round."