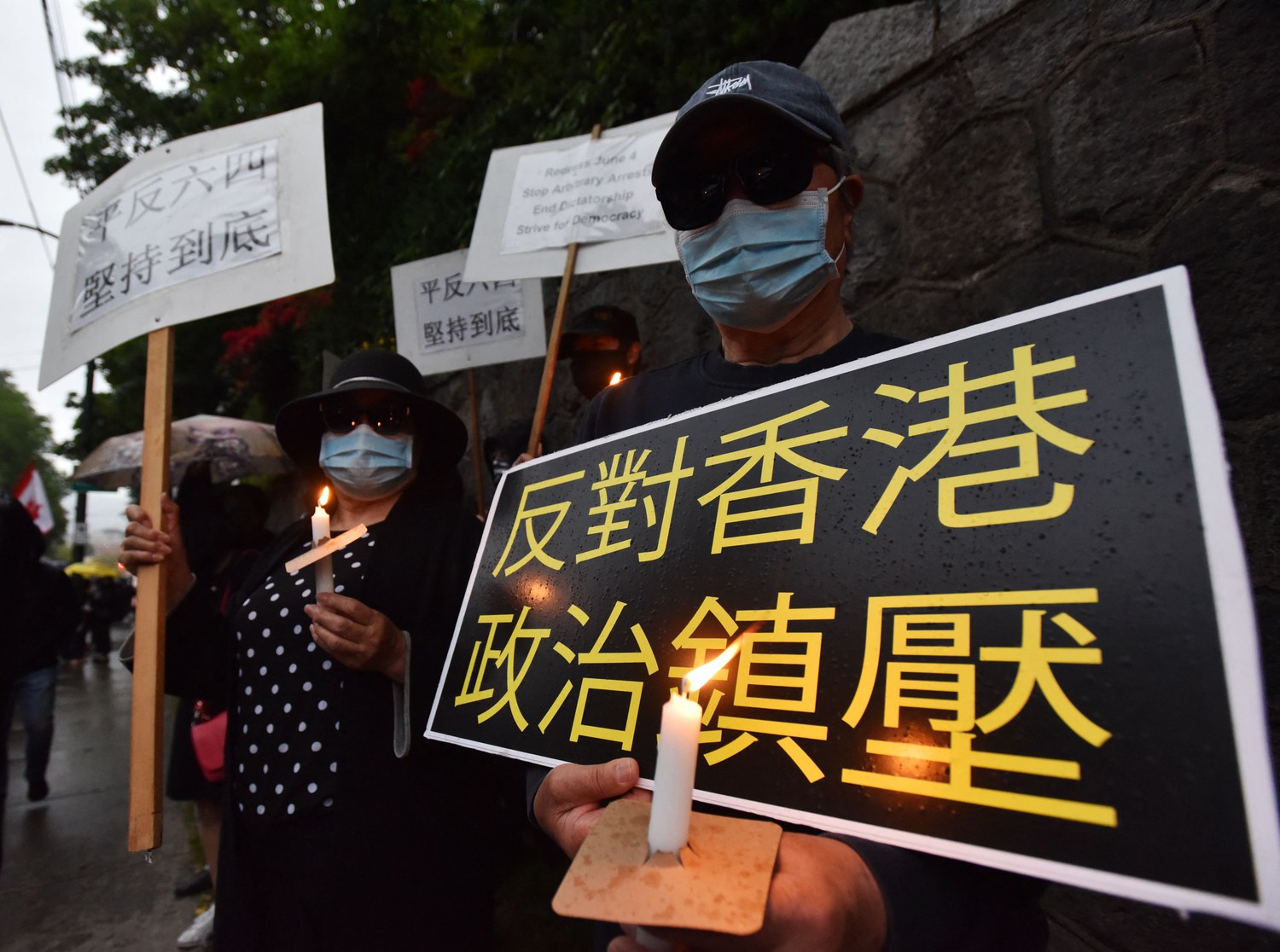 A member of the Tianamen Mothers victims' group says banning the Alliance and its candlelight vigils won't erase history.

Following the dissolution of a group that once organized candlelight vigils marking the June 4, 1989 Tiananmen massacre, a top Chinese official warned on Monday of attempts to foment a 'color revolution' in Hong Kong.

Chinese public security minister Zhao Kezhi called on Hong Kong police to keep up their crackdown on "radical secessionists," according to the Global Times newspaper, which has close ties to the ruling Chinese Communist Party (CCP).

"The police force must have a clear head ... crack down all kinds of disruptive, subversive activities by hostile forces at home and abroad, resolutely cut off the mastermind of hostile forces that endanger national security, smash the Hong Kong version of the 'color revolution' plot," the paper quoted Zhao as saying.

His comments came after a group that once held now-banned candlelight vigils marking the 1989 Tiananmen massacre voted to disband on Saturday following an investigation by Hong Kong's national security police under a law imposed on the city by the CCP from July 1, 2020.

The Hong Kong Alliance in Support of Patriotic Democratic Movements of China stands accused of acting as the agent of a foreign power, with leaders Chow Hang-tung, Albert Ho, and Lee Cheuk-yan arrested on suspicion of "incitement to subvert state power," and the group's assets frozen.

At a special general meeting held at the June 4th Memorial Hall under heavy police watch in Mong Kok district, members voted 41-4 to disband after 32 years of supporting victims of the Tiananmen killings, demanding accountability and advocating for an end to one-party rule.

The somber meeting began with a moment of silence for the victims of the massacre, with some members and staff wearing black mourning clothes with the slogan "For Freedom, Shared Destiny, and Struggle Together."

The annual vigils the Alliance hosted often attracted over 100,000 people, but the gatherings were banned in 2020 and this year over what local authorities said was coronavirus risk.

Political cartoonist Huang Jijun, who has published work relating to the June 4, 1989 bloodshed under the pen-name Zunzi, said the end of the Alliance and the shuttering of the June 4th Memorial Hall museum will require people to find other ways to keep the member of the 1989 democracy movement alive.

"I think this calls for a diversification of the ways in which we remember, mourn, and keep records," Zunzi said. "If there is a genuine rehabilitation one day, then what the authorities did ... will be there in the historical record."

No plans to leave

Zunzi said he has no plans to leave Hong Kong, however.

"If I were in my 40s, I might have left Hong Kong, but at a certain age, the risks we face might not be similar to those faced by younger people," he told RFA. "Young people have more things to consider in this kind of environment."

He added: "I want people who live in Hong Kong, no matter who they are, to know that the overall situation is changing before their eyes ... the most rational thing I can do is to keep doing what I have always done, until the climate prevents me from doing it, and then stop."

Zhang Xianling, a member of the Tiananmen Mothers' victims group who donated some items to the museum, said the authorities are hoping to erase people's memories of the massacre by going after the Alliance.

"The purpose of dissolving the Alliance is to make everyone forget about the June 4th incident, but dissolving an organization can't erase the bloody crimes that have gone down in history," Zhang told RFA.

"The absence of a candlelight vigil doesn't mean that there is no candlelight in the hearts of people of conscience," she said. "That light -- the memory of June 4, 1989 -- will never go out."